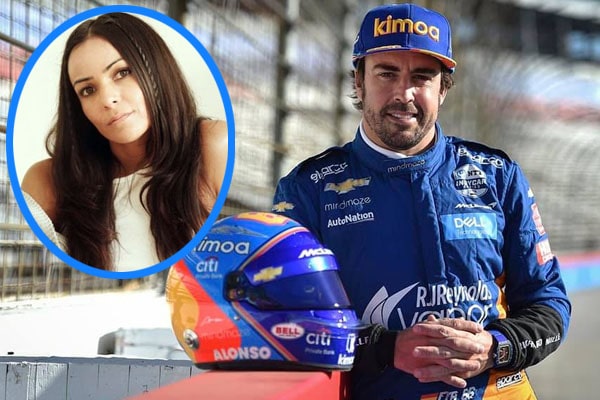 Once a married couple, Fernando Alonso and Raquel del Rosario have established their name in the world in their own rights. Alonso is notorious among motorsports lovers as a Spanish racing driver, currently competing in Formula One for Alpine. Similarly, Rosario is a well-known Spanish singer who served in the band El Sueño de Morfeo (Morpheus’ Dream) as a lead singer for more than a decade.

Fernando Alonso and Raquel del Rosario were together from 2006 to 2011 as husband and wife. But ever since their separation, the former couple’s admirers are curious to know what made them go separate ways.

Hence, let’s get a closer look at Fernando Alonso and Raquel del Rosario’s marriage, the reasons behind their separation, and their life after divorce.

Married After A Year Of Dating

The former celebrity couple, Fernando Alonso and Raquel del Rosario, met for the first time in 2005 after Alonso invited Rosario to perform at a concert to mark his first F1 title. Afterward, the duo fell in love, dated for a few months, and then got married in November 2006.

Fiercely protective of their privacy, Alonso and Rosario did their best to keep their marriage plans a secret. However, people found that they had rented out the prestigious Palace Conde de Toreno in Malleza to celebrate the banquet.

As a result, they changed their plans, and the entire ceremony was conducted at Alonso’s parents’ home in Oviedo. Thus, Alonso and Rosario exchanged their marital vows in front of family and few friends.

Soon after their marriage, Fernando Alonso and Raquel del Rosario went to the Maldives to spend their honeymoon. They also invited some of their friends but secretive Alonso and Rosario instructed them to simply show up at the airport with a suitcase and some clothes. They did so to avoid being spotted by the paparazzi.

Furthermore, both the then-newlyweds and their closed ones did not confirm their marriage for the longest time. An entire year went by before the priest of Colloto, José Manuel Pidal, provided Alonso and Rosario their official testimony. Mr. José put an end to the speculations in 2007, and finally, Rosario also confirmed her marriage with Alonso in an interview in 2008.

However, the blissful marital life of the F1 driver and the singing diva could not last long due to various marital issues. So, they ended their five-year-long marriage with a divorce in 2011.

Alonso And Rosario Announced Their Divorce In 2011

The Spanish driver, Fernando Alonso, notified his fans about his separation from Raquel de Rosario in an official statement in 2011. However, the estranged couple did not divulge why they had decided to end their marriage.

As mentioned by Alonso and Rosario in the official statement, their divorce was very thoughtful and mutually agreed upon decision.  The former husband-wife duo further noted that they separated as a married couple but never as friends since they think an excellent relationship of affection and mutual admiration remains between them. Also, they are committed to always ensure the happiness of one another.

With their statement addressed to all people who follow their professional trajectory, Alonso and Rosario intended to avoid any possible speculation about their decision. Moreover, they requested the media to respect their personal life, something that they have always wanted to shield.

Rosario Married Another Man After Divorce

A few years after the divorce, Fernando Alonso’s ex-wife, Raquel del Rosario, exchanged wedding vows with a Galician photographer and filmmaker, Pedro Castro. As disclosed by Rosario on her personal blog, their wedding took place in California without a single guest.

Rosario and Castro had always thought that a wedding should be a celebration according to the personality of those getting married. So, both Raquel and Pedro were clear from the beginning that their ceremony will include just the two of them. The versatile singer announced the happy news of her marriage with Castro via her Instagram and her blog.

Moreover, Raquel del Rosario’s husband, Pedro Castro, also posted a snap of their special day, showing off their new wedding rings. He also thanked everyone for the wonderful wishes on their big day.

Rosario and Castro have been together for several years now. But unlike her first marriage, Raquel and Pedro are still together and are very much in love with one another.

Alonso’s Relationships After The Divorce

Unlike his ex-spouse Raquel del Rosario, Fernando Alonso has not yet tied his marital knot with any woman since their divorce. However, he is said to have dated several beautiful ladies after his separation from Rosario.

Reportedly, Alonso was in a romantic relationship with a Russian-born Swiss Supermodel, Xenia Tchoumitcheva.  The pair might have gotten together when Fernando was in the process of divorcing his first wife. However, the two never confirmed their relationship, and the rumors died down after a few months.

Furthermore, according to reports, Raquel del Rosario’s ex-husband, Fernando Alonso, dated the Russian model, Dasha Kapustina, in 2012. But it also did not last long, and Alonso started dating a Spanish sports journalist, Lara Alvarez. They dated from December 2014 to March 2016.

Moreover, the F1 driver, Alonso, was romantically linked with model and social media influencer Viki Odintcova. They were seen together in April 2016, but there were no reports of their relationship blossoming.

But, since mid-2016, Alonso is committed to only one lady, and she is none other than the Italian model, Linda Morselli. The lovely couple has kept their relationship private and are rarely seen together. But we hope the beautiful pair are madly in love with each other and even walk down the aisle soon.

The formerly married pair, Fernando and Raquel, did not welcome any child while they were together. However, after marrying Pedro Castro, Rosario became a mother to two kids with Castro: Leo Castro and Mael Castro.

The current husband-wife duo welcomed their first child, Leo, to the family on 15 July 2015. Similarly, Fernando Alonso’s ex-wife, Rosario, gave birth to her second child with Pedro, Mael, on 9 May 2016.

But, Fernando Alonso has not welcomed any kids yet. In an interview with Race Fans, Alonso revealed that his dedication to F1 usually left him alone. He said that it left him with no free time, no privacy, no friends, no family, and no kids. With this statement, one question arises, “Could Fernando’s F1 career be the major reason behind his and Raquel’s divorce?” Only the pair can answer the question.

Nevertheless, let’s hope we will get to hear news of Raquel del Rosario’s ex-husband being a father soon.

So, both Fernando Alonso and Raquel del Rosario have moved on in their life with their respective partners. As Rosario is already settled with her husband, Pedro Castro, and their two sons, we hope Alonso will also marry his current lover, Linda, and start a family with her soon.