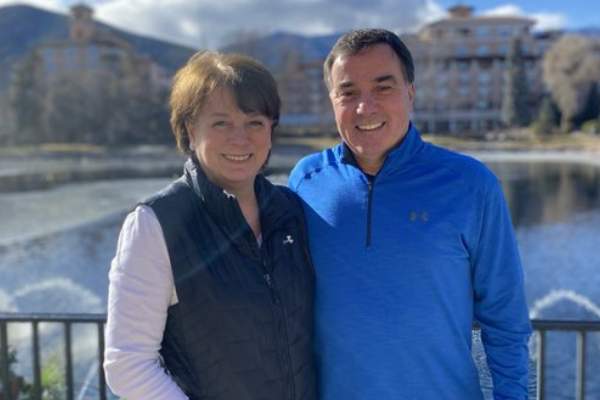 Apart from a successful career, Fran also enjoys a blissful marital life. He is happily married to Meg O’Connell Fraschilla. It has been several years of their harmonious conjugal life, and many must be curious about the former coach’s beloved spouse. So, in today’s article, let’s know more about Fran Fraschilla’s wife and the details of their happy marriage.

Married For Over Three Decades

As mentioned earlier, Meg is the former college basketball coach, Fran Fraschilla‘s spouse. The couple tied the knot in the mid-80s and have been together ever since. However, it is not known when the Fraschilla pair met. Nevertheless, the husband and wife must have had a splendid journey together.

Fran loves his partner very much, and he does not hold back from sharing photos with her and showing his love and admiration. Once, he even tweeted how she was like the glue holding the family together.

Coaches’ wives are like glue. Even when you can’t see them, they’re still holding the family together. Happy Mother’s Day! pic.twitter.com/9gbz5TSH15

The couple’s everlasting bond shows how hard they must have worked to make their marriage work. Hopefully, their marriage will last for several more decades, and their love will grow even stronger in the coming days.

It has been more than three decades since the duo got hitched. In all these years of sharing a blissful marital life, the Fraschilla pair have welcomed two sons together. Fran Fraschilla’s wife gave birth to their first child, James Francis Fraschilla, on January 1, 1993. Furthermore, Matthew Hudson Fraschilla is the couple’s youngest kid.

Meg and Fran Fraschilla’s children have already grown up. Meg O’Connell Fraschilla’s son, James Fraschilla, competed for a basketball team for four years at the University of Oklahoma. Currently, he works in the video/player development department at Orlando Magic. Likewise, Meg’s other kid, Matt Fraschilla, played basketball at Harvard University. Following his graduation, he enrolled at Villanova University for his master’s degree.

Matt, who previously worked as a graduate assistant and video coordinator at Villanova, currently serves as an assistant coach for the men’s basketball team at Harvard. The Fraschilla siblings seem to be doing well in their professions. Meg and her husband must be proud of them.

As mentioned earlier, Meg and Fran, who have been married for over three decades now, enjoy blissful family life with their sons. Growing up, Mrs. Fraschilla must have had a splendid time as she spent time with her parents and four siblings.

Meg’s siblings are already married and have families of their own. The O’Connell clan must have had a wonderful time growing up together.

Moreover, Meg O’Connell Fraschilla’s parents were married for almost 49 years. Her mother accepted her dad’s proposal on their first date. Unfortunately, Meg’s father passed away on July 10, 2005, while her mother died on November 9, 2021, following a brief illness.

All in all, Meg must be doing well. While her career remains hidden, she has been an everlasting support in her husband’s profession. A proud mother of two and a loving wife, Meg has fulfilled every role of her. We hope we get to know more about her in the coming days. We wish her sound health and blissful days ahead.