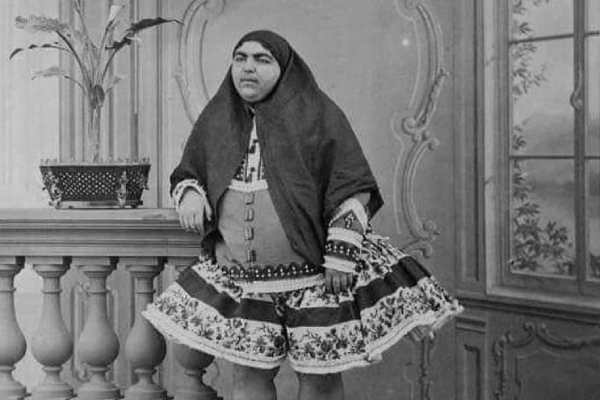 The real name of Princess Qasar is  Princess Fatemeh Khanum. Read the article to know why she was called the beauty with moustache? Image source: Social Media.

What is perfection? What is beauty? We, for sure, do not have the perfect definition of beauty: beauty- a noun with ever-changing standards and definitions. To witness how the concept has changed over time, we have an interesting article for you.

You might have heard about Princess Qajar– who has recently become a trending character on the internet. With the growing interest in Princess Qajar, people across the internet have fitted her into their made-up stories as if they have been forced to divulge information that they don’t know about her. So we’ve written this article to cover you up from the half-truth and fabrication. Read the whole article to find out how Princess Qajar became the symbol of beauty in Persia and why she is called beauty with a mustache.

Who Was Princess Qajar?

Contrary to the memes and many posts circulating on the internet which show multiple pictures of the princess claiming to be the same person, there are actually two different princesses associated with the term Princess Qajar. The primary figure in the news is  Princess Fatemeh Khanum or better known as ‘Esmat al-Dowleh,’ who was the daughter of Nasir al-Din Shah Qajar-the King of Persia, from 1848-1896. Esmat was the daughter of king Nasir with one of his wives Taj al-Dowleh. While many were quick to point out the photo is of a male actor, but it is indeed the photo of the Princess herself taken by her husband, Dust Muhammad Khan.

Princess Qajar- The Symbol Of Beauty In Persia. Why Is She Called Beauty With A Mustache?

Now, having known who was Princess Qajar or Esmat al-Dowleh, let’s check onto the facts about how she became the symbol of beauty. First things first, as claimed by many, Esmat was not the symbol of beauty in the early 1900s as the photo of her were taken way before then, and she died in 1905. The only part that has some truth is that there was a time in Persian history when Esmat’s appearance or having a thin mustache was considered beautiful. But that is not the sole reason for her symbolism. In fact, there’s a lot more to it than it meets the eye.

Esmat was the second daughter of King Nasir, and he had trusted her with the responsibility to serve as the host for female foreign guests to the court. She also went out of the tradition and learned to play the piano while also becoming a photographer with a private studio in her house.

Esmat had the guts to speak for herself, as proven by the time when she asked her father to let her husband back into the country. She appeared as a competent woman at her father’s court like other royal women. As mentioned by art historian Dr. Staci Gem Scheiwiller, the women from Nasir al-Din Shah Qajar’s harem’s photographs show that they had developed a revolutionary consciousness, and the sheer volume of Esmat’s photos ultimately made her the front and center of this social and cultural revolution. Hence, her symbolism has far greater meaning than attracting mere suitors through her appearance.

Another fake claim originating from this historical meme was 13 men killing themselves due to the rejection from Princess Qajar. But there is no historical evidence to this story, and it seems to have been fabricated out of thin air. Esmat was probably married when she was around nine or ten years old as her husband was ten during the marriage. In addition, coming from a patriarchal society of ancient Iran, she hardly had the opportunity to meet any man, not her relative, let alone reject 13 lovers. Even after marriage, it is unlikely she was approached by any suitors.

Princess Zahra Khanum is an addition to the story due to the vague Princess Qajar reference. As the 12th daughter of King Nasir, Zahra was a pioneer feminist and nationalist who supported a cultural and constitutional revolution in Persia. She was instrumental in changing women’s in that era as she put forth some of the most strong arguments for the necessary steps toward women’s participation in education, paid work, and the development of the country.

Both Esmat and Taj were not defined by their appearance but their accomplishments in changing the roles of women. Their symbolism does not come from copying or setting a standard for beauty but comes from their merit and substance. The story of both of the Princess needs to be told in a manner that respects their work, not diminishes it. All in all, ‘Princess Qajar’ has shown us how historical memes can lead to a plethora of misinformation and hoaxes.