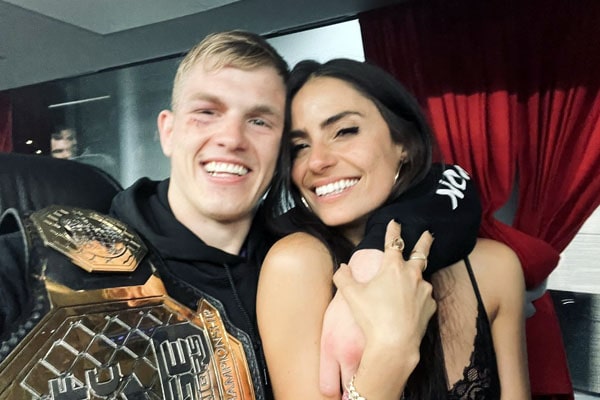 The undefeated former Cage Warriors Welterweight World champion Ian Garry is soon making his long-awaited UFC debut in New York at UFC 268. He will be competing against Jordan Williams at UFC 268 on 6 November at Madison Square Garden. Besides being in the headlines for being ‘The Future of European MMA, Garry is currently under extreme media scrutiny concerning his love life.

So, who is the aspiring MMA star dating at the moment? Here, let’s find out all about Ian Garry’s girlfriend and what she does at the moment.

Who Is Ian Garry Dating At The Moment?

The Irish-born Ian Garry is in a romantic relationship with the famous English television presenter Layla Anna-Lee. However, the exact date and place where the current romantic duo first met and started dating is still a mystery to those who show interest in their love life.

However, going through their social media pages it looks like Ian and Layla decided to make their relationship public in mid-2021. Layla shared a snap with her current man, Ian Garry, in June 2021, after he won the Cage Warriors Welterweight Championship. She even inked her upper abdomen with Ian’s nickname, The Future, to show her immense love for her boyfriend.

Moreover, Ian Garry frequently shares photos getting cozy with his girlfriend, Layla, on his social media pages. He also does not leave any stone unturned to show his love and care for his girl in front of thousands of his fans.

Hence, currently, the beautiful Layla Anna-Lee is Ian Garry’s girlfriend, and they are happy with each other. We hope to see this duo living together with the same love, support, and care for one another for years to come.

As mentioned earlier, Ian Garry’s partner, Layla Anna-Lee, is a well-established English TV presenter working exclusively in sports. Born to a Brazilian mother and an English father of Irish and Scottish ancestry, Anna-Lee first appeared on the TV screen at the age of six in a commercial for Fairy Liquid. But, later, she chose to pursue a career in hosting and now she is one of the leading TV presenters.

Since starting her career in the broadcast industry, Anna-Lee has co-presented and presented several game shows and other programs. But, she is mainly famous as a presenter of sports-related shows, including Cage Warriors on BT Sport, UFC Connected, The Dugout, and many more. To date, Anna-Lee has fronted content for prestigious channels in their fields such as UEFA, Adidas, ESPN, UFC, FIFA, and NBC.

Furthermore, Layla continues to serve with major brands who assigned her with rare interviews with Cristiano Ronaldo, Lionel Messi, Neymar & David Beckham, to name a few.

Besides, an extremely sought-after live event host, Layla is also a keen writer and advocate of the female voice. Having attended the London School of Journalism, she not only writes her own scripts, but also Layla publishes her writings in well-known magazines like Stylist, The Mirror, and The Huffington Post.

For now, you can watch Layla Anna-Lee on Cage Warriors, Karate Combat, Neymar Jr’s 5, and Manchester United Official content. Let’s hope she will achieve more in her career in the journalism field.

Layla Anna-Lee Is Involved In Many Other Fields

Apart from being a successful presenter, Layla Anna-Lee currently engages herself in many other fields. She is the manager of The Future Group Co., which she and her colleagues launched in February 2021. It is an in-house management team to take the business, commercial, day-to-day management & media pressures off Ian Garry and allow him to focus completely on fighting. Her boyfriend, Ian Garry, is its CEO.

The Current Love Of Ian Garry Was Previously Married

The current sweetheart of Ian Garry, Layla Anna-Lee, was previously in a marital relationship with Richard Cullen, whom she married in 2014. Their wedding ceremony was easy-going and fuss-free, which took place at Artington House. Both Cullen and Anna-Lee had invited only a few of their friends and family members.

However, it seems like various issues haunted their marital life within a few years of their marriage. So, they quietly separated from each other, and after some time, Anna-Lee began dating Ian Garry while Cullen stayed away from the media reach.

Though Ian Garry’s girlfriend, Layla Anna-Lee, ended her marriage with Richard Cullen, it looks like she welcomed a son named Lucas Cullen with him. But, sadly, she rarely shares any details about her little boy in public.

Nevertheless, Layla Anna-Lee is happy with her current relationship with the aspiring MMA fighter Ian Garry. Hopefully, their bond with each other stays as strong as it is now till eternity. And who knows we might see Layla as Ian Garry’s wife in the coming days.