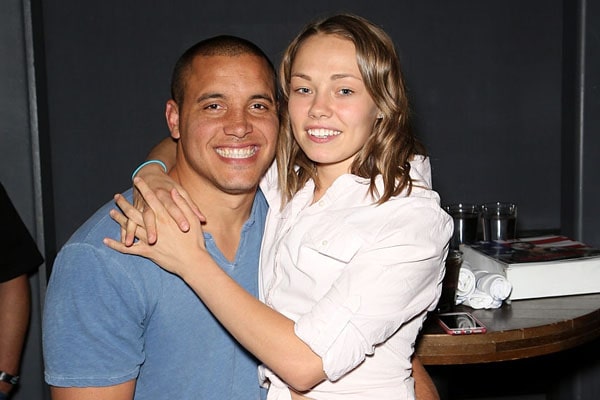 Pat Barry and Rose Namajunas are engaged couple yet to be married. Image Source: Getty Images.

Well, the lovely pair, Pat Barry and Rose Namajunas are an engaged couple and have been each other’s partners for a long time now. Pat Barry is Rose Namajunas’ fiancé and soon to be husband. Both Pat and Rose are MMA fighters and are well-known for their outstanding careers.

But Rose’s soon to be husband Pat Barry retired from MMA in late 2013 and returned to kickboxing, joining Glory the following year. On the other hand, Pat Barry’s soon to be wife Rose Namajunas holds the title of former UFC Women’s Strawweight Champion. The lovely couple is so perfect for each other. So, let’s get straight down to know more about the pair’s love life and relationship.

How Did Pat Barry And Rose Namajunas’ Love Rise?

We could say Pat Barry and Rose Namajunas’ meeting was a small fight. That day, Barry was sparring at Roufusport, working on his stand-up game. Out of nowhere, Rose, whom Pat described as ‘tiny waif of a girl’ who was competing for a UFC championship, came over and punched him in the side of the face.

Pat was stunned and he turned to look at her. Rose asked, “You’re Pat Barry, right?” Pat said he is. And Namajunas gave him a fighting tip saying, “Well, you should have seen that coming,” Anyway, this is Barry’s side of the story.

Rose Namajunas just had no idea about the incident. She also said it did not happen the way Pat said. She did not remember it. But now, the two love birds perhaps have the flashback of the start of their love for each other.

Plus, Pat had love at first sight when he saw her. He also remembers a lot about the early days and how Rose’s beauty, poise, and attitude struck him hard. As for Pat Barry’s partner, it took a little longer to feel the same way about him. Nonetheless, his charm eventually wore her down at last.

The love birds got engaged with each other in 2014. They couldn’t be happier enough with their love life and relationship. Pat and Rose have come a long way indeed.

Everything came down because of a pizza. In 2017, Pat Barry had finished a sparring session with Brock Lesnar in Alexandra, Minn. And you know, what’s a little pizza without a drink? Barry started buying shots, seeking to diffuse any potential tension. A lot happened there, and after some heated words with a local, Barry was in jail. His priorities skewed towards whiskey and prescription pain pills for too long.

That behavior affected his training and fights. Namajunas broke down crying over Barry’s history with substance abuse. It also affected Rose’s career and her performances didn’t seem quite right. Barry blamed himself as the outside distraction. He also claimed she should’ve been the world champ. So, Pat Barry said that he was not doing that any more.

Now, the two lovers have found a different lifestyle, a path they like a lot better. It’s not easy to be in committed relationships. Pat and Rose fought with their issues and made the best relationship for sure. They have shown how love beats every problem with time.

So Perfect For Each Other

Barry probably knew that Namajunas was the one for him. He knew she had a special talent since the day they met. The lovely couple is so perfect for each other. First of all, both of them are great MMA and UFC fighters. And second of all, they solved their love issues and went on to get engaged with one another.

Pat Barry is an ideal boyfriend as he takes her phone calls, helps plan out her schedule. Plus, he makes sure Rose has plenty of water during a long media event. Similarly, Rose also stated,

“He surprises me every day with how supportive he is. I never really had that male role model in my life that treated me well. So for somebody to treat me like a queen, it is definitely a blessing.”

We can definitely say that they ‘found love in a hopeless place.’ Now, fans are just waiting to see the engaged couple getting married soon. Maybe Pat and Rose want to give a great wedding surprise to the world in the future.