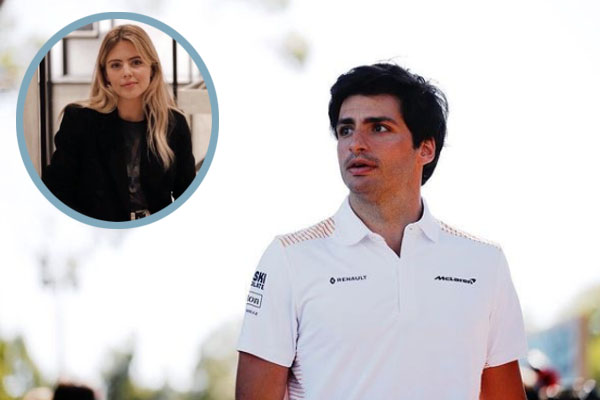 Scuderia Ferrari driver Carlos Sainz Jr. is notorious for his driving prowess and hails from a rich racing legacy. The son of the double World Rally Champion Carlos Sainz, Carlos Jr. is gaining immense success in the motorsports industry. So, obviously, being a famous racing driver, it wouldn’t be shocking if he has someone special in his life.

Various online sources claim that Carlos Sainz Jr. is currently dating the beautiful Spanish lady, Isabel Hernaez. However, there are no photos of the two hanging out together to prove Carlos and Isabel are in a committed relationship.

On top of that, both Hernaez and Sainz Jr. have kept their dating life as confidential as possible. So, whether the pair are actually dating or if it was just a rumor is unknown.

Furthermore, the rumors of Isabel Hernaez being Carlos Sainz Jr.’s girlfriend spread in media when the blonde beauty shared some pictures hinting she is dating the F1 driver. Though she has not shared any pictures of her and Carlos together, she has attended numerous Grand Prix weekend races.

Moreover, Hernaez also posted a snap of a suited guy from the Goodwood Revival event. If seen closely, the suited guy looks just like Carlos Sainz. So, this resulted in speculations that Carlos Sainz Jr. is currently dating Isabel Hernaez.

However, neither Isabel nor Carlos have officially announced their relationship to the public yet.

Who Is Isabel Hernaez?

As mentioned by the F1 photographer blogger Kym Illman, Carlos Sainz Jr.’s rumored girlfriend, Isabel Hernaez, is a resident of Madrid, Spain. She holds a Bachelor’s degree in Bilingual Journalism. Besides, the Spanish beauty is also in the fashion industry as a press officer.

Moreover, going through the Instagram page of Isabel, with over 51K followers, it looks like she is an aspiring model. She does modeling shoots for various prestigious Spanish Fashion magazines.

Besides, Hernaez is also a food lover and passionate about trying out new dishes. We can often see her cooking different dishes and sharing the recipes with followers on social media.

Besides his current rumored girlfriend Isabel Hernaez, Carlos Sainz Jr. was previously romantically linked with  Angela Gastanaga. However, they distanced themselves from each other within a few months. Apart from Gastanaga and Isabel, Sainz Jr. has not been linked with any other women.

Moreover, in an interview with the official F1 website in 2015, Sainz Jr., admitted that his ideal partner needs to have confidence in him. He added that it is hard for either party when there is a lot of traveling around involved so, being confident in one’s relationship is necessary for its success.

So, it seems like the energetic Scuderia Ferrari driver might have found the qualities in Isabel Hernaez. Though both Hernaez and Sainz Jr. are protecting their love life from the spotlight, we hope they will clarify it to their admirers shortly.