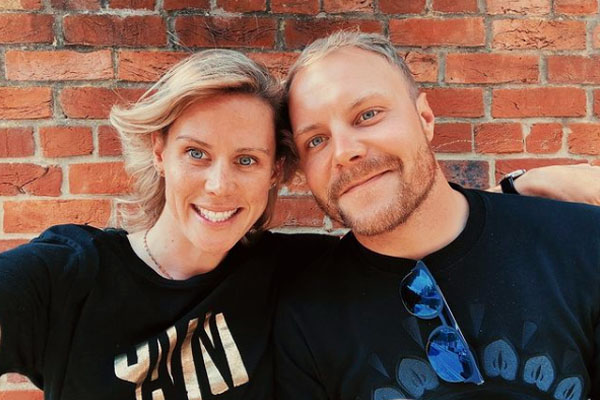 Valtteri Bottas, the Finnish racing driver, is currently competing with Mercedes in Formula One. Since joining Mercedes, the energetic driver has won nine races, including three in 2017, four in 2019, and two in 2020. Along with winning several racing competitions, Bottas is winning the heart of millions of racing fans worldwide. But, the only woman who is in his heart at the moment is the Australian road cyclist Tiffany Cromwell.

While the Mercedes driver is gaining excessive stardom through his career in the motorsports industry, his fans are curious to know about his beautiful girlfriend. So, here, let’s get a closer look at Valtteri Bottas’ girlfriend, Tiffany Cromwell, and Bottas’ previous relationships.

Tiffany Cromwell, the current girlfriend of racing driver Valtteri Bottas, is also an integral member of the sports industry. She is an Australian road cyclist currently riding for UCI Women’s WorldTeam Canyon-SRAM.

Valtteri Bottas’ girlfriend, Tiffany Cromwell, born on 6 July 1988 in Stirling, Australia, often participates in various cycling competitions. As a road cyclist, she has won two stages of the Giro d’Italia Femminile and ranked herself fifth at the UCI Road World Championships.

Some of the major cycling tournaments in which Tiffany Cromwell competed and her ranks are as follows.

Besides the above-mentioned events, Cromwell took part in dozens of cycle races in the past, held in and out of Australia, ranking herself in the top positions. She was also one of the competitors of the 2020 Tokyo Olympics. Though the passionate athlete could not bring home any medals from her first Olympics, she did great and finished the race in 26th position.

Valtteri Bottas and Tiffany Cromwell are openly dating each other since early 2020. Though the two were spotted together in some public events before, the public first recognized Cromwell as Valtteri Bottas’s girlfriend only from Valentine’s day of 2020.

Bottas confirmed his relationship with Cromwell by posting a Valentine’s Day message with snaps of the pair on his Twitter and Instagram pages. Moreover, Cromwell also did not miss her chance to introduce her love to her fans through her Instagram page. She posted a loving Valentine’s Day message in the caption section along with a string of her photos getting cozy with Bottas.

The good-looking couple, Bottas and Cromwell, enjoys spending their quality time together visiting different places and cycling together. Both of them also often attend events to cheer each other up. We wish the romantic duo all the best for their upcoming days, and may their relationship last till eternity.

Ever since Valtteri Bottas met Tiffany Cromwell, he has found a person who keeps him motivated even when he faces a defeat. Cromwell is always there with her man to encourage him and have faith in himself after bad races.

During an interview with Bild am Sonntag, Bottas said that his girl, Tiffany hung photos of his victories in their apartment in Monaco. He added that he never wanted his driving pictures hanging on his wall as he thought it was self-expression. However, Tiff told him to remember what he is capable of when he looks at those pictures.

Hence, when Valtteri goes home after a bad race, he looks at pictures of his victories the next morning. After seeing that, he remembers that he had won them someday.

Furthermore, to push Bottas forward with more enthusiasm, Cromwell often tells him not to compare himself with his competitors, to rather believe in his own capabilities. Valtteri Bottas is undoubtedly a lucky guy as he has got such an understanding woman as his sweetheart.

The F1 driver Valtteri Bottas was previously in a marital relationship with a Finnish Olympic swimmer, Emilia Pikkarainen. Reportedly, the ex-couple began to date each other from 2010 and eventually exchanged their wedding vows in September 2016. Their marriage ceremony took place at St. John’s Church, Helsinki.

After three years of living together as a husband and wife, Bottas and Emilia announced their separation in November 2019. Bottas posted a heartfelt message on his Twitter and Instagram handles announcing that they would be ending their three-year marriage.

Unfortunately I have to share you the news that the marriage between Emilia and myself has come to an end: pic.twitter.com/EyaRI6Fp73

Bottas did not reveal much about his separation from Emilia. But he disclosed that they decided to part their ways away due to the challenges his career and life brought. Also, Bottas thanked Emilia for all the sacrifices she made for him and for her support throughout the years.

Currently, Valtteri Bottas’ ex-wife, Emilia Pikkarainen seems to be single. It looks like her current focus is her career as a swimmer and her other business ventures.

But, Valtteri Bottas has already found his new love, Tiffany Cromwell, and is happy with his current love life. So, hopefully, we will see Valtteri and Tiffany walk down the aisle in the near future.