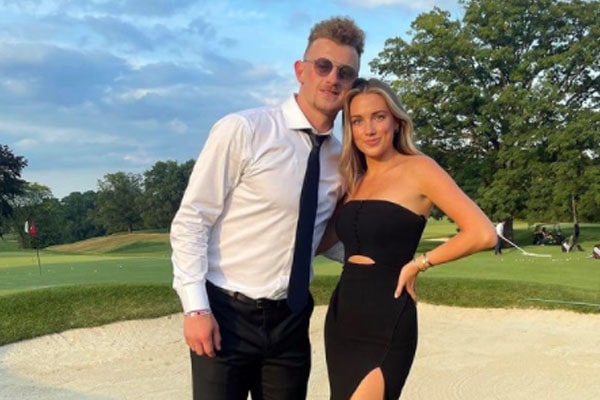 Professional ice hockey center and captain of the Buffalo Sabres of NHL, Jack Eichel, has gained immense fame among ice hockey fans worldwide. He has not just set the NHL on fire with his skills but also has a stunning girlfriend named Erin Basil. With the pro-ice hockey player’s rising stardom, his beautiful lover is also gaining considerable media attention.

Buffalo Sabres star Jack Eichel’s girlfriend, Erin Basil, is a Northeastern University graduate. She earned her Bachelor’s degree in Health Services/ Allied Health/ Health Sciences, General, from NU in 2017. Later, Ms. Basil joined University at Buffalo in 2018, from where she graduated with a Master’s degree in Public Health in 2020.

Furthermore, according to Erin Basil’s LinkedIn page, she was a Students Affairs Intern at Roswell Park Comprehensive Cancer Center from 2017 to 2018.  Similarly, as a medical student, she worked seasonally as a Medical Assistant and Patient Care Coordinator at Lancaster Medical Group.

Moreover, Basil also did a part-time job as Palliative Care Team Project Manager Assistant at Erie County Medical Center Corporation for a while from 2019 to 2020.

But, ever since August 2021, the beautiful girlfriend of Jack Eichel, Erin Basil is working full-time as a Business Development Representative for PerfectServe.

According to an article on The Buffalo News, Jack Eichel started dating Erin Basil, whose parents own several car dealerships in the region, during his freshman year at Boston University, in 2014. It also reports that the two met via their mutual friend from Western New York.

Since their relationship began in late 2014, the beautiful pair Eichel and Basil’s love and care for one another is increasing with time. Jack Eichel’s girlfriend, Erin Basil, can often be spotted attending her boyfriend’s games to cheer him up. Moreover, they also hang out together in some public events and do not hesitate to flaunt their relationship.

Furthermore, the star player Jack Eichel hardly uploads any photos with his lady love to keep his love life a secret. However, Erin frequently posts snaps of them spending quality time together on her social networking handles. Unlike her better half, she does not hesitate to show her love before thousands of her followers.

We wish the pair good luck for their upcoming days and hope to see them tied in a marital knot soon. As Eichel has achieved immense success in recent years, he might be planning to turn his long-time girlfriend into his wife and mom of his kids.

An Avid Animal And Nature Lover

Jack Eichel’s girlfriend, Erin Basil, seems to be an avid animal and nature lover. Going through her social media pages, we can see her posing with her fur baby and even sharing individual pictures of him. Basil has a dog named Harold and she celebrated her pet’s first birthday this July.

Similarly, Erin is also a passionate outdoorsy girl who loves to hang out with her girlfriends and, obviously, her sweet partner, Jack Eichel. She often shares pictures of her traveling to various places and having a great time together with her close ones.

So, Eric Basil is enjoying her life to her best with supporting friends and family by her side and a prestigious job. Moreover, the presence of a caring and dedicated boyfriend, Jack Eichel, has made her life more colorful.

Hopefully, we will get to see their love flourishing more in the days to come.