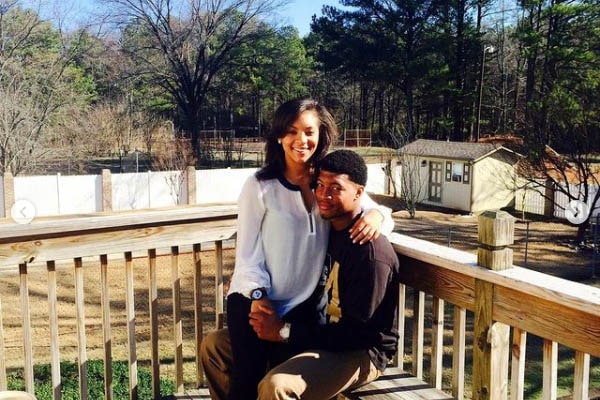 Jameis Winston and his wife, Breion Allen are together since their high school. Image Source: Instagram/ Jameis Winston.

Jameis Winston is one of the most prominent American football quarterbacks who is currently signed to the NFL’s New Orleans Saints. Firstly, he signed a one-year contract worth $1.1 million with Saints on 28 April 2020. He re-signed with the same football team on an additional one-year deal worth $12 million in March 2021. Before this, Winston was a quarterback for Tampa Bay Buccaneers for four years, from 2015 to 2019. The 2019 NFL passing yards leader Winston has won numerous titles and awards to date, including the prestigious Davey O’Brien Award and Heisman Trophy.

The former Florida State quarterback, Jameis Winston, is not just successful in his professional life. Apart from being an award-winning quarterback, Winston is currently enjoying his personal life to his best. Despite struggling with several allegations and controversies in the past, he is happily married to his long-time girlfriend, Breion Allen, since 2020. Here, know more about Jameis Winston’s wife, Breion Allen, and if she also has some athletic skills like her famous husband.

The notorious sports personality, Jameis Winston, is not the only athlete in his family. His wife, Breion Allen, is also a former athlete who played college basketball during her time at the Rice University. While attending the university to earn BA in Sports Management and Sociology, Allen was a Rice Women’s Basketball Team member. She played as a guard in the basketball team throughout her sophomore and senior years.

While enrolled at the Rice University, Jameis Winston’s wife, Breion Allen, was named to the C-USA Commissioner’s Honor Roll for her great performance. She played 26 games in her sophomore year and 19 games in her junior year. Allen averaged 2.1 points and 0.9 rebounds in 7.1 minutes per contest. Moreover, she tied her career-high with 12 points at then no.3 Texas, making a season-high three three-pointers.

Furthermore, Breion Allen was also a basketball player at her high school. She was a three-year letter winner and two-year starter for coach Donnie Quinn. As a senior in high school, Allen averaged 11.0 ppg and made 58 three-pointers. She won various awards and titles for her performance as a basketball guard, including Birmingham Tip-off Player of the Week. Also, Bama Prep Girls rated her second-best guard in Alabama during her high school basketball career.

Jameis Winston attended Hueytown High School while his beau, Breion Allen, attended Hoover High School, and both of their high school were in the same city, Alabama. As both were in their high school’s athletic team, they might have met during an inter-college sports competition and fell for one another. The couple started dating then and are together ever since.

After graduating from high school, Winston moved to Tallahassee to play college football for Florida State University. However, the couple’s love for each other never wavered. Despite geographical distances, Allen and Winston remained close with the help of their social media handles. They often used to flaunt their immense love for each other on their respective social media pages.

Jameis Winston’s then-girlfriend, Breion Allen, even served as Winston’s training partner in the summer of 2013. Winston had tweeted a string of hot pictures of his girl taken during his training in FSU. However, it seems like he removed them later.

The year 2020 brought a lot of changes worldwide. The spread of the COVID-19 and the lockdown that resulted from it affected millions of people globally. However, the ongoing pandemic did not stop quarterback Jameis Winston from marrying his long-time girlfriend, Breion Allen, on 27 March 2020.

Jameis Winston and Breion Allen were engaged on 19 May 2018, the day Prince Harry married Meghan Markle. While the royal wedding was going on, in New York Winston got down on one knee before Allen in the middle of the Metropolitan Museum. Without wasting time, Allen said Yes, and Winston crowned their romantic moment by offering her a breathtaking diamond ring.

Although their dream wedding was scheduled to be in April, surrounded by their loved ones, they got married in a beautiful but intimate ceremony in the privacy of their own home in Odessa. Jameis Winston’s girlfriend turned wife, Allen, had posted a photo of them from their wedding, holding hands and heads bowed in prayer on her Instagram page. A month later, Winston also shared some photos of their wedding day, expressing how lucky he feels to have Allen, who he calls Breezi Boo, in his life.

Jameis Winston’s wife, Breion Allen, is a mother to two toddler boys with her handsome husband. Allen, along with her partner, Winston, welcomed their first son, Antonor Malachi Winston, before their wedding, in 2018. Similarly, their second son, Taurus Winston, arrived on 31 December 2020. Allen had announced that she and her husband were expecting their second child- a boy via Instagram in August 2020.

We’re entering into the season of thankfulness! Share with us what you are thankful for for a chance to be featured on our page! #FamilyFriday pic.twitter.com/4l0u5DvKTU

While Allen was pregnant with their first baby, Jameis Winston discussed what being a father is like and how it changed his bonding with Allen. He told the Tampa Bay Times magazine that the main thing is the respect and the growth that he sees in his then-girlfriend. Winston added that just seeing what Breion was going through on a day-to-day basis and hearing from different parents about parenthood changed his life perspectives.

Besides being a doting mom to two boys, a loving wife, and a former athlete, Jameis Winston’s wife, Breion, is also a businesswoman. She is the founder of Herrway, a brand of luxurious activewear for women. Moreover, she is a sales associate at Berkshire Hathaway Homeservices. Before this, Allen interned at CSN Houston and Rice University’s Association.

Currently, Breion Allen, her husband, and their two kids reside in a Mediterranean-style mansion in Odessa.