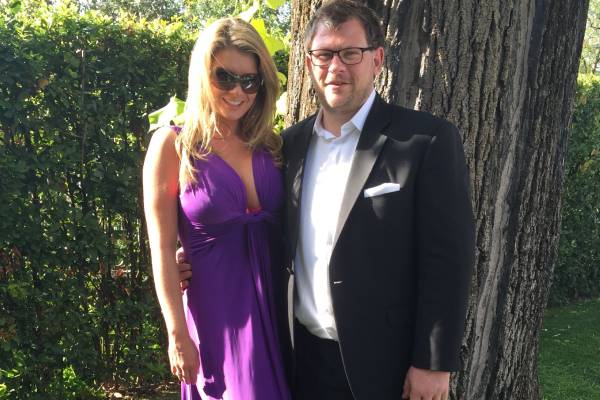 James Martin Wade, also known as James Wade, is a professional darts player from England, currently plays in the Professional Darts Corporation. At 24, he won the 2007 World Matchplay and became the youngest player to win a major PDC title. He has won several matches in his professional career, including eleven PDC majors, the UK Open, the World Grand Prix, and many others.

James has not only become successful in his professional career but has also gained immense fame and popularity around the world. His fans are often curious about his personal details, especially his lovelife. The successful darts player shares a blissful marital life with Sammi Marsh. So, why not we learn in detail about James Wade’s wife and their lovelife.

Met In One Of His Matches

As mentioned earlier, the popular darts player is married to Samantha Wade, also known as Sammi Wade. The pair first met when she escorted him on stage before the Premier League match in 2012. Furthermore, at that time, she was working as a “walk-on” girl for the PDC.

The couple reportedly began their relationship in 2013. Interestingly, the couple got together for their shared love of fish and chips and kebabs. James Wade’s wife, Sammi, shared the news of their engagement via Twitter, where she uploaded a picture of her wearing a ring. Moreover, in an interview, James revealed that he needed a drink to have the courage to propose to her.

James stated that he was not drunk, but had a bit of liquid courage and told Sammi’s father that he would marry her. Sammi Marsh’s dad took it well and approved of the marriage. Two years after getting engaged, on August 8, 2015, the couple walked down the aisle.

James and Sammi’s friends and families attended their wedding ceremony. Since then, the married pair have been living a wonderful life together, and now they are the doting parents of a son.

Welcomed A Son With Her Husband

Aforementioned, James and Sammi have been married since 2015. In all these years of being married, the lovebirds welcomed a son together. However, they had to go through a miscarriage and emotional investment in IVF treatment before welcoming their kid.

Before giving birth to their son, James Wade’s wife went through IVF and had lost one child. In an interview, Sammi’s husband mentioned that it was two years of upset and stress.

In May 2018, James’ wife shared the first picture with the baby bump. Before that, she and her husband had kept the news of the pregnancy a secret. Then, in October 2018, Sammi and James welcomed their baby boy, Arthur James Wade. She shared the news of the baby’s arrival on her Twitter page.

The couple was ecstatic to welcome their son and are raising him with immense love and care. In an interview, Sammi’s husband mentioned that the birth of their little one after such hard times is a blessing, and they all are happy.

Let’s hope the family has a beautiful time together.

James Wade’s beautiful spouse, Sammi, worked for the PDC in the past. As mentioned earlier, when Sammi met her future husband, she was a “walk-on” girl. She often accompanied James during his entrance. In 2018, PDC abolished runway escorts, and she had to look for another profession.

Going through her Twitter page, we can see that Sammi has uploaded several photographs of hers. Furthermore, her Twitter bio also describes her as an ex-model. She mostly modeled for calendar shoots and might have earned sufficiently. However, it has not been disclosed when and why she stopped modeling.

Moreover, after PDC abolished runway escorts, Sammi began working as James’ manager. But, it is unknown if she still serves as her husband’s manager. Nevertheless, James’ wife must have earned significantly from her job.

In addition, Sammi is also a marathon runner. She has run for several charity events. Sammi Marsh-Wade‘s husband also accompanied her to several of her races. The husband and wife duo support each other and inspire each other to achieve their best.

Sammi is very active on Twitter, yet she reveals very little about her personal details. But, she seems to be doing great for herself. Nevertheless, let’s hope Sammi and James continue to stay together and their marriage lasts for several years.