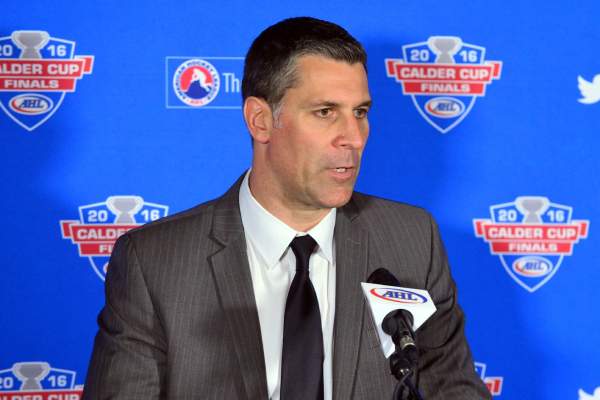 Jared Bednar is a well-known Canadian professional ice hockey coach who serves the Colorado Avalanche of the NHL as their head coach. He was previously the head coach of the Lake Erie Monsters of the AHL and led them to a Calder Cup Championship in the 2015-16 season. Bednar is also a former ice hockey player who competed for nine years, from 1993 to 2002.

Aside from being an established sports figure, the coach is a proud family man. He enjoys a blissful life with his partner, Susan Bednar, and their two lovely kids, Kruz Bednar and Savega Bednar. Many of his fans might be curious to know about the whereabouts of the 50-year-old’s family. Hence, today, we will learn more about Jared Bednar’s wife and children.

Has A Strong Bond With Susan

Jared met Susan for the first time in a restaurant during the 1990s. It was when the sportsman was playing in the ECHL with the Huntington Blizzard in West Virginia. One day, he went to lunch with a few of his teammates in a local restaurant. They stayed in there until it was almost dinner time when a new waitress walked in to start her shift at 5. She was none other than Jared Bednar’s wife, Susan.

Bednar eventually noticed Susan and got a chance to talk to her later. He asked her if she would like to attend the Blizzard’s year-end team dinner party as his date. Susan said yes, but the former ice hockey player had to leave for four months to return home. Nonetheless, the pair kept in touch and have been together ever since.

While Jared was away from his family for eight long years to chase his dream of becoming an NHL coach, Susan was very supportive of him. She was raising their two children and managing about ten of their rental properties while the coach was away. The husband-wife duo used to FaceTime each other daily and talk for a couple of hours. It must have been difficult to make their relationship work, but the lovebirds somehow did it.

Aside from enjoying a blissful marital life with each other, Jared Bednar and his wife, Susan, share two children. They are proud and doting parents of their son Kruz Bednar and daughter Savega Bednar. Both of them appear to enjoy living privately.

Kruz Bednar is the eldest child of the Avalanche head coach and his partner. Unfortunately, the birth details of Jared Bednar’s son have not been disclosed to the public yet. Nonetheless, it is known that he spent his teenage years playing baseball. At the age of sixteen, Kruz enrolled at Valor Christian High School, Highlands Ranch, Colorado, and played for the school’s baseball team until he graduated in 2018.

Jared Bednar’s baby boy has now grown up to be a fine young adult and is studying at a college in South Carolina. Kruz is very supportive of his dad and often retweets most tweets related to Jared on Twitter. He must be proud of his father’s achievements.

Savega Bednar is the youngest and the only daughter of Jared and Susan. She is also five years younger than her elder sibling. Moreover, Jared Bednar’s daughter is now a teenager and is attending high school as a junior.

Furthermore, as the title suggests, Savega is a talented and competitive swimmer. She is a member of the Varsity Swimming Team at the Cherry Creek High School in Greenwood Village, Colorado. The young girl has participated in many 400, 200, and 100 Medley and Relay races. Also, she qualified for the 2022 5A State Championship and the A-League Championship.

Well, Jared Bednar’s family seems to be doing well. He must be living a comfortable and content life with his wife and children. Nonetheless, we wish the ice hockey coach and his loved ones happy and prosperous life.

Kruz’s given name is of Spanish origin and means “cross.”