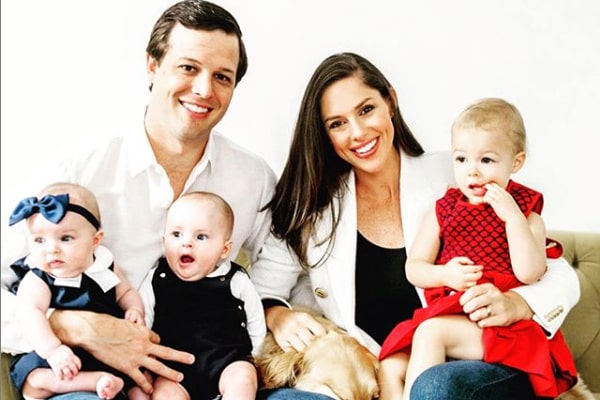 Born as Abigail Haight Huntsman, Abby Huntsman is a renowned television personality and an American journalist. Daughter of former Governor, Jon Huntsman Jr., and Mary Kaye Huntsman, Abby’s popularity hiked as a host on NBC News and MSNBC. Likewise, she co-hosted the ABC talk show, The View from September 2018 to January 2020.

Abby Huntsman’s husband, Jeffrey Bruce Livingston, is a well-groomed man who grew up to build a successful career and make a family. He is working as the director of Kohlberg Kravis Roberts, a private equity firm. He joined the company in 2012 and is a member of Financial Services and Hospitality & Leisure industry teams. Presently, he serves on the board of Apple Leisure Group.

Previously, Jeffrey worked for McKinsey & Company in both N.Y. and Beijing. Likewise, he also worked on his father-in-law’s 2012 presidential campaign, handling finances. Livingston went to Wharton School and later graduated from the University of Pennsylvania in Finance and Management.

Despite being a public figure after marrying Abby, he belongs to a pretty decent family. Livingston’s parents, Deidre Sharp Livingston and Bruce V. Livingston own a company called Boyd Industries in Clearwater, Fla. The company manufactures and sells dental equipment.

Abby Huntsman’s husband, Jeffrey’s Instagram, is private with 292 followers. He seems to be a grounded man who prefers his life away from the media attraction.

Abby Huntsman and Jeffrey Bruce Livingston were college sweethearts. They graduated from the University of Pennsylvania and met there. Regrettably, there isn’t much about the couple’s relationship details, but they were together since their Uni days.

Furthermore, Abby and Jeff married at the age of 24 on August 21, 2010, in Washington National Cathedral, Washington, D.C., United States. It has been a decade since their togetherness, but they are still inseparable. They both share the same passion as they did before.

Abby shares a couple of pictures of them, appreciating one another’s existence. Both Abby and Jeff push one another and guide towards success. Therefore, a couple that drives one another to their limits’ best lasts long, overcoming all the obstacles. Abby Huntsman and Jeffrey Bruce Livingston are the best examples.

Throughout their ten years of marriage, the 34 years old couple gave birth to three children. They welcomed their first child, Isabel Grace Livingston, on November 29, 2017. She is adorable and gutsy.

The first pregnancy always brings confusion, and parents do not seem to be prepared. However, Abby Huntsman coped with all the confusions along with her husband and became a perfect parent. Abby Huntsman’s husband, Jeff, supported her very much, and they enjoy being parents.

Aforementioned, Abby and her partner enjoyed being parents so much that they were already ready to welcome another baby. Hence, in 2019, the pair welcomed twins on June 5, 2019.

Happy Easter from our chicks to yours 🐥 #family #blessings

Abby Huntsman’s daughter, Ruby Kate, was born 20 minutes earlier than her twin brother, William Jeffrey. The pair were happier than ever, but their eldest daughter, Isabel’s excitement to welcome her siblings, was unbeatable. For now, the family of five is enjoying their quality family-time,

Let’s hope the family bonding remains the same for many years, and the couple’s passion for one another remains constant.