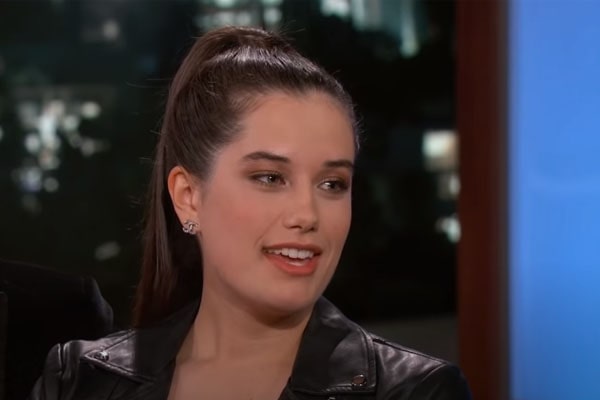 John Travolta's daughter, Ella Bleu Travolta seems to be single and does not have any boyfriend. Image Source: YouTube.

Stunning Ella Bleu Travolta is an emerging actress, well-known for her films such as Old Dogs and The Poison Rose. She is also the daughter of Pulp Fiction actor, John Travolta with his deceased wife, Kelly Preston. Ella Bleu’s mom was also an American actress and model.

Well, people love to know about many celebrities and their love affairs, relationships, and dating history. Likewise, Ella Bleu is an actress in the making, and surely most of you may be wondering about who Ella Bleu Travolta’s boyfriend might be, and her love-life, and relationships. Okay, why don’t we get straight down and take a closer look at her love life and relationship status?

Ella Bleu Travolta followed her dad’s footsteps and starred in the movies, Old Dogs, with her dad. She got to act with the famous actor, Robin Williams as well. But Ella was a child actor at that time. As for her latest film, The Poison Rose, she played the wife of a college football player who gets murdered. So there was not so much onscreen romance of Ella Bleu in the movie.

Nevertheless, we might get to see Ella doing onscreen romance with her co-stars in her upcoming movies. But it could be hard to tell anything about Ella Bleu Travolta’s boyfriend and her offscreen romance as she loves privacy and secrecy.

Maybe Ella Bleu is rather focusing on her career instead of having love affairs. She probably does not want to be in a relationship so early that her career gets out of track.

Ella’s Dad Embarrassed Her In Front Of Her Celebrity Crush

If you did not know this, John Travolta’s daughter, Ella Bleu Travolta, is a big-time fan of Twilight series, and she had a crush on the Twilight star, Taylor Lautner. She’s in ‘Team Jacob.’ The father-daughter duo had stopped by Jimmy Kimmel Live to promote their movie, The Poison Rose.

During the interview with Lena Waithe as a guest host, Ella opened up about the embarrassing moment she had with Taylor Lautner ten years ago. She said that Taylor Lautner was coming over to the house. Ella and her friends were looking up for his pictures on the internet.

Ella was researching him and his family. And after Taylor and his family got there, the first thing her dad said, “Oh! Ella was just looking you guys up on the internet.” She also posted a throwback photo of her with Taylor on her Instagram.

So, that’s how John Travolta embarrassed his daughter in front of her celebrity crush. But in John’s defense, he said,  “A father’s point of view is, you know, everybody loves Taylor Lautner, wouldn’t he be flattered that Ella’s looking him up?”

Nevertheless, we hope that Ella Bleu will open up about her relationship soon as most of her fans are curious to know who the young actress is dating or have dated.