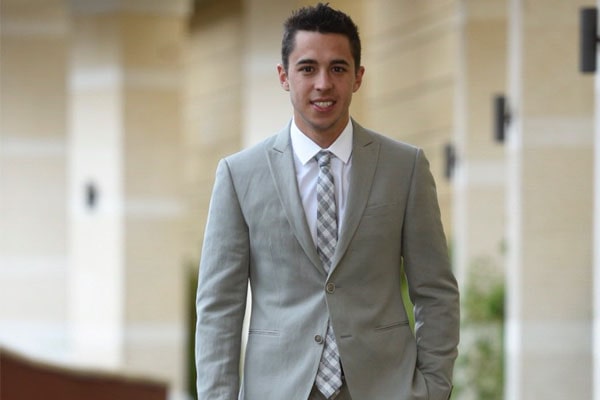 Johnny Gaudreau, the American professional ice hockey winger, is currently competing for the Calgary Flames of the National Hockey League. Before joining Flames, he played for the NCAA Division I’s Boston College Eagles from 2011 to 2014. Nicknamed Johnny Hockey, he has won the hearts of millions of female ice hockey fans worldwide. But, the only lady who stole his heart is his girlfriend turned fiance Meredith Morris.

With the rising fame of the Flames star, Johnny Gaudreau, his personal life is also gaining excessive media attention, including his love life. So, here, let’s get a closer look at Johnny Gaudreau’s girlfriend, Meredith Morris, with whom he got engaged in 2020.

Gaudreau And Morris Engaged After Dating For A While

The most gentlemanly player for the 2016-17 NHL season, Johnny Gaudreau, and his lover, Meredith Morris, are usually secretive about their relationship. So, the exact date they met and started dating is still an unsolved puzzle to most of Gaudreau’s fans. But, what we know is that the beautiful pair got engaged on 29 August 2020.

Congrats to #Flames star Johnny Gaudreau on getting engaged! pic.twitter.com/qO4faH4VqH

Reportedly, Johnny proposed to his girl, Meredith, with an engagement ring and a Champagne in August 2020. Though the couple tried their best to keep their engagement a secret, some online sources had announced and leaked some of their engagement photos, which are still circulating the web.

So, Gaudreau and Morris are now a soon-to-be-married couple. We hope we will get to hear the news of them tied in a marital knot soon.

Johnny Gaudreau’s wife-to-be Is A Nurse

The skilled sportsperson, Johnny Gaudreau’s girlfriend turned fiance, Meredith Morris, is currently a Registered Nurse at The Children’s Hospital of Philadelphia. She works in the neonatal intensive care unit (NICU).

Furthermore, as mentioned on Meredith Morris’ Linkedin page, she attended the Academy of Notre Dame de Namur from 2006 to 2010. Later, Morris joined James Madison University in 2010 to pursue a Bachelors’s degree of Science in Nursing with a Nursing major and Chronic Illness minor. She graduated from JMU in 2015.

Similarly, Johnny Gaudreau’s fiance, Meredith Morris, completed her Master’s degree in 2020. She did Masters in Pediatric Nursing from Drexel University’s College of Nursing and Health Professions.

Both Of Them Are Protective Of Their Relationship

As mentioned above, both Johnny Gaudreau and his future wife, Meredith Morris, seem to keep their relationship protected from the media’s eyes. As a result, they hardly share any pictures of them together on their respective social media pages.

Moreover, since their engagement, the duo has not been spotted out together in public.

However, according to various online sources, Meredith Morris will officially become Johnny Gaudreau’s wife in a few weeks. As registered on Zola, their wedding ceremony will be held on 4 September 2021, Saturday at St. Agatha-St. James Church, 3728 Chestnut Street. Similarly, their reception will be at Fairmount Water Works, 640 Waterworks Drive, and after-party at Assembly Rooftop Lounge.

Hopefully, the soon-to-be husband-wife duo, Johnny Gaudreau and Meredith Morris, won’t summon their big day secretly. We hope to see them living a happy life together as a husband and wife and parents to a couple of kids, till eternity.