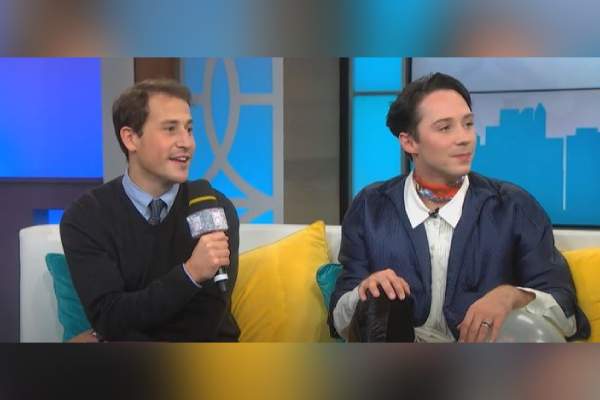 Victor Voronov and Johnny Weir were married from 2011 to 2014. Image Source: Social Media.

John Garvin Weir, aka Johnny Weir, is a figure skater and television commentator from America. The two-time Olympian Weir began skating when he was 12. He retired from competitive figure skating in 2013 and joined NBC as a commentator. His broadcasting career started at the Sochi Olympics in 2014.

Johnny enjoys a successful professional career. However, his marriage could not be that successful. He was previously married to Victor Voronov for a short period. So, why did the former pair end their marital life? Find out in the following article, along with more information about Johnny Weir’s ex-husband.

As mentioned earlier, the former figure skater was married to Victor Voronov. The ex-couple tied the knot on December 30, 2011. Johnny shared the news with a tweet that said he was married and no more living in sin. Johnny Weir’s then-spouse came out as gay only a month before their wedding, and his friends only found out in People magazine.

The ex-pair married in an early morning civil ceremony at the New York City Courthouse. They exchanged handwritten vows and were accompanied by their loving parents, Tony Voronov, Lili Voronov, Patti Weir, and John Weir. Furthermore, Johnny and Victor even took the new surname, Weir-Voronov.

Although the official stuff was done in a hush-hush way, the then-couple had planned a large wedding in July 2012. Victor Voronov’s then-husband shared in a statement that it was the greatest moment in his life, and he also added about working very hard to make him happy and proud.

However, the ex-duo’s marriage could not last long. It took a turn for the worse, and several court cases, allegations, and disputes began surfacing in the media.

Johnny Announced About The Divorce

Prior to the Sochi Olympics, Johnny filed for divorce in February 2014, citing irreconcilable differences. In May 2014, the American commentator announced his separation on Twitter. He expressed great sadness for no longer being together and wished him well.

The fans felt the news to be pretty sudden as just a week before his announcement, Johnny Weir’s estranged husband was talking about getting down and dirty with him in space.

Although it was sudden news, it was not exactly surprising, considering the former pair had their fair share of issues. For instance, Voronov filed a police report accusing Weir of biting him. Later, the estranged duo requested the judge to dismiss the case.

Furthermore, in an interview with Access Hollywood, the former athlete revealed that he had been having a tough time at home for a long time which he mostly kept to himself. He went on to add that he was losing himself by being married to Voronov, he was losing his objectives in life and was very isolated from the world.

When asked about the biting incident, Weir admitted that they were fighting in a terrible way which turned physical that night. He claimed that his ex-spouse was drunk and was yelling at him about his mother, who was assisting him through some financial problems.

Johnny and Victor’s divorce battle is considered to be one of the ugliest divorces in the sports industry. The former couple who called it quits in February 2014, got their divorce finalized in January 2015. The divorced pair completed most of their divorce settlement process in private.

Johnny received full custody of their Japanese Chin pup Tema. Likewise, he was said to pay $1,000 a month to Voronov as spousal support. Moreover, the three-time figure skating national champion got to sell their $20,000 Faberge Egg from the St. Petersburg Collection along with their wedding rings to pay for legal fees.

Later, in December 2015, the egg went up for auction, and cash earned was said to go toward paying Voronov’s debt that he sustained during their bitter divorce. These are some of the settlements that Weir and Voronov did.

Amidst their divorce battle, Weir accused his ex-partner of attempted rape and herpes. Later, Victor slapped his former beau with a defamation lawsuit in September 2014. With several cases filed and disputes, Weir and Voronov’s divorce was no less than a drama. Currently, the former duo seems to have moved on in their respective lives.

Who Is Johnny Weir’s Ex-Husband?

Victor is a lawyer by profession. He went to Georgetown Law and graduated in 2008. Furthermore, he received his undergraduate degree from Emory University in Atlanta. There, Johnny Weir’s ex-husband was on the Dean’s List and president of the chess club.

Furthermore, as per Heavy, Voronov was working in a law firm in Detroit as of February 2018. When he married Johnny, Victor quit his job at a law firm to support him. Following the divorce, it has been reported that he began working as a contract lawyer. Likewise, as per one 2015 article, the Emory graduate was working as a real estate company’s vice president and legal consultant.

To talk about Victor Voronov’s relationship, he was reportedly dating Joti Polizoakis. The couple met in the winter of 2014 at the airport in Atlanta. The pair hit it off instantly and moved to Detroit. The lovebirds got engaged in December 2015. However, they split in August 2016. Furthermore, Johnny Weir’s ex-husband blamed him for trying to ruin his and Polizoakis’ relationship.

Overall, Victor must live a wonderful life away from the media limelight. Hopefully, he will find his happily ever after soon. We wish him light and happiness in his life.