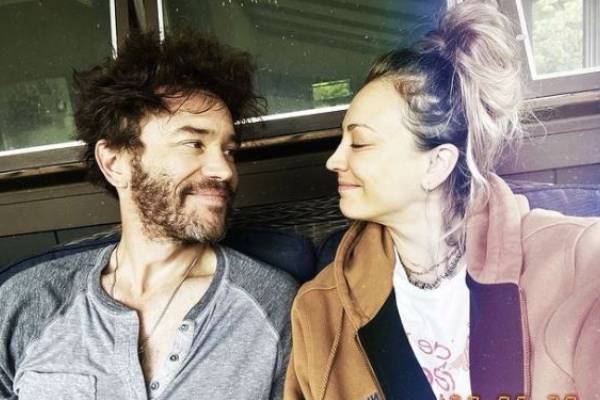 The Netflix original series Ozark has gained significant fame over the years. The series, which received positive reviews from viewers throughout its run, has received several nominations. For instance, it has been nominated for the 2022 Primetime Emmy Award. One of the cast members who has been nominated is Tom Pelphrey.

Tom is a renowned actor who came into prominence for his several roles in movies and series. Many are curious if the handsome actor is single or taken. So, in today’s article, let’s find out who Tom Pelphrey’s wife/girlfriend is. Also, what about his marriage plans? Stick with us till the end.

Good looks and charm has made several fans fall for the Ozark star. The New Jersey-born actor has also been with some beautiful faces in the industry. Well, on-screen matchups of Tom include Stephanie Gatschet and Emme Rylan in Guiding Light.

In his real life, Pelphrey previously dated Lili Simmons and Gina Tognoni. After that, he met Jaimie Alexander. The former duo made their red carpet debut and relationship Instagram official in May 2018. Unfortunately, the pair eventually ended their bond.

Now, people are curious if he has found love again. So, keep reading to find out more about his lady love.

Is In A Relationship With A Famous Actress

Any The Big Bang Theory fan is familiar with Penny. An aspiring actress from Omaha, Nebraska, with different career interests than the other main characters, Penny is portrayed by none other than Kaley Cuoco. You might be wondering why she is being described here.

Well, the Rutgers University graduate, Tom, is currently in a relationship with Kaley. Coming from the same professional background, the couple might have bonded over their shared love for acting. You might want to know how the pair met. Don’t worry, we got you covered.

The pair met in an interesting way. Tom and Kaley share the same manager, Andrea Pett-Joseph. She set them up, thinking they were perfect for each other. The duo met at the Ozark premiere in April 2022. The blonde beauty was standing with Andrea when Tom walked in.

When The Flight Attendant star turned around after hearing his voice, it was love at first sight for her. And, when she laid her eyes on the actor, she got a tingling feeling. The couple immediately connected. Reminiscing about the moment, Cuoco revealed that she felt like she had known him her whole life.

More About Tom And Kaley’s Relationship

Tom and Kaley are madly in love with one another. The couple made their relationship Instagram official in May 2022. Sharing photos on her social media, she was seen cuddling up to Tom while on an outdoorsy getaway which was surrounded by trees. The post also included cute polaroid pictures of the duo.

On the other hand, Kaley Cuoco’s boyfriend shared the same pictures on his Instagram and wrote a lengthy caption, which he credited to “Noah’s wall -1/31/04.” Since then, the lovebirds often gush about one another’s love on social media and do not shy away from expressing their feelings.

Furthermore, wishing him on his 40th birthday, Tom Pelphrey’s girlfriend shared a photo of him and wrote a beautiful caption, calling him an incredible man that saved her in all ways. She concluded the caption by saying she loves him.

Likewise, the duo made their public appearance on May 23, 2022, during Greg Berlanti‘s Hollywood Walk of Fame ceremony. They were seen sitting together, holding each other’s hands.

Any Plans On Marriage?

Although it has been a few months since Kaley and Tom started their relationship, their love for each other proves they were meant for each other. As a result, many fans are curious if the duo will tie the knot someday or if Kaley will become Tom Pelphrey’s wife. On top of that, Kaley’s divorce from equestrian Karl Cook in September 2021 has raised curiosity if she will ever get married again.

While talking with Glamour, Tom Pelphrey’s girlfriend revealed that she wanted a deeper relationship so that she could take a week off here and there. Furthermore, she added that she won’t get married even though she would love to have a long-lasting relationship.

Talking about her love life with Tom, the Big Bang Theory star revealed that since they started dating, work has not been the only important thing in her life. After completing her shooting, she shared her plan of returning home and taking the rest of the year off to support her partner and what he’s shooting. She further added that she wanted to be there for someone else, not just herself.

Moreover, in October 2022, the duo shared the news of their pregnancy. They are expecting their first child, a baby girl in 2023. The love birds might make great parents.

So, for the time being, it remains a mystery if the Pelphrey-Cuoco couple will tie the knot. Well, we wish to see them together for many years ahead. We hope the duo has a life full of happiness and blissfulness in the upcoming days.