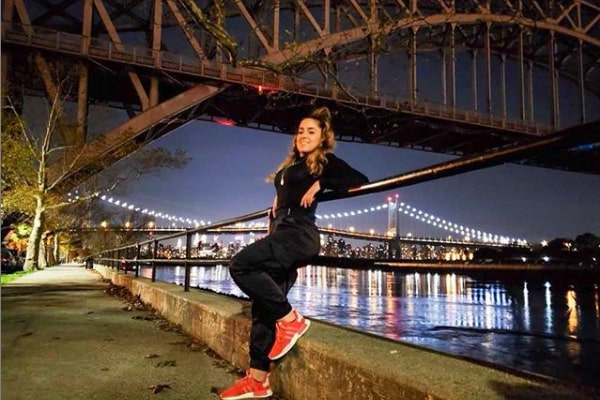 Iman Kawa is a professional chef and boss of her own. Image Source: Kawa's Instagram.

Let’s do a thing. Let’s imagine the hard works and experience one holds to hold the record for the fastest UFC knockout. And the same energy to keep his personal life out of the media’s approach.

Yes, it’s about the veteran fighter, Jorge Masvidal, and his mysterious relationship status. Moreover, it’s about Masvidal’s girlfriend and updates. Thus, let’s get on the ride without further ado.

Well, aforementioned, Jorge is a hardcore secretive person. People might find the mystery behind the Bermuda triangle, but Jorge Masvidal’s girlfriend, forget about it.

However, the reticent is not an option in the era of the internet as famous people are one keyword away. Thorough landed us on this beautiful chef, Iman Kawa, who also served as the UFC star, Jorge Masvidal’s chef.

Iman Kawa is beautiful, can cook, and is humble. Furthermore, she attended Culinary School at the CIA in New York. The founder and CEO of Better Than Your Mother’s worked with chefs ranked on S. Pellegrino’s ‘The World’s Top 50’ list.

A post shared by Better Than Your Mother’s (@betterthanyourmothers)

Masvidal’s alleged girlfriend has honed her skills throughout the years-long experiences, but above all, she perceives the importance of ‘guest appearance’ to grow her business. Therefore, she has cooked for prominent names like Jonathan Benno, Adam Perry Lan, etc.

Iman Kawa is currently living in Miami, but she loves New York. Hence, her business is New-York based that makes customized cookies. Furthermore, the bold appearance, the confident speech, and the knowledgable conversation make Masvidal’s alleged girlfriend super attractive.

Similarly, Iman started another business venture. According to an Instagram profile featuring her new venture, a dessert shop named “Sweet Toof” is about to be opened in Williamsburg, Brooklyn, in late February 2022.

Iman Kawa belongs to a huge family and has several siblings, among whom her older brother, Ibrahim Kawa, works with Jorge Masvidal.

Jorge Masvidal has been a celebrity for more than a decade. Thus, he is well versed in separating his personal life from his professional career.

Despite the privacy, a few sites have noted that Jorge Masvidal and Iman Kawa had dated for a decade. However, there are no witnesses to claim the statements or proofs to stamp their relationship.

Both Iman Kawa posted a couple of photos with hashtag #family. Furthermore, she also appeared on super bowl with Jorge but since she is his chef and her brothers are sports manager, who knows what’s cooking!

Rumored To Have Children Together

It is believed that UFC star, Jorge Masvidal, and chef Iman Kawa share babies. Not one but three; two daughters and a son. However, Masvidal’s fans aren’t fortunate to witness his babies yet.

Although Masvidal is tight-lipped about his children, he spoke about his daughter on occasion. In an interview, he revealed that his daughter hates when people approach him when they are spending time together.

After years of hard work and dedication, Jorge Masvidal is at the pinnacle of his career. As a result, his fame escalated along with his job. Thus, it looks like Jorge Masvidal’s daughter wants her father for herself during family time.

Unfortunately, Jorge Masvidal’s other children are away from the limelight, let’s hope we will get a glance of them eventually.

Are Jorge Masvidal and Iman Kawa Together?

Regrettably, there is no way of knowing their actual relationship if they choose not to open up. Jorge Masvidal’s supposed ex-girlfriend and baby mama is a kick-ass woman, but her timeline on Instagram doesn’t match.

Iman Kawa’s Instagram shows that there is nothing but a professional relationship, while Masvidal’s is full of training updates, meetups, and training. Regardless of their relationship status quo, Iman Kawa cooked for Jorge for a long time.

Furthermore, in one of Kawa’s uploads on YouTube, the alleged couple revealed that her cooking is mandatory during Masvidal’s fight week. Hence, a romantic relationship or not, the pair seems to have great chemistry.

Therefore, let’s hope Jorge Masvidal and Iman come out and clarify their relationship one day as there are many who stan them and believe they share babies.