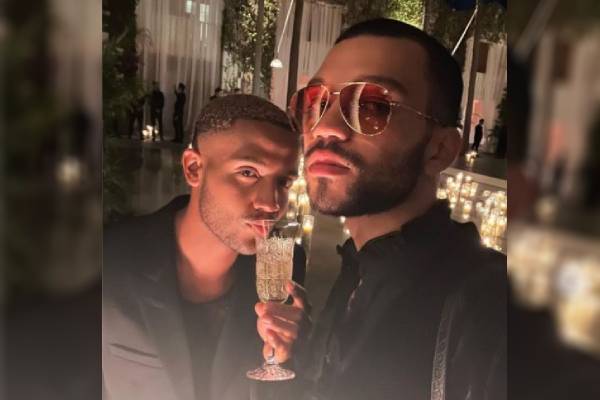 The Paper Towns star Justice Smith shocked everyone when he came out as a queer man through his Instagram. Not only this, but he also introduced his boyfriend Nicholas L. Ashe in the same post breaking the hearts of many worldwide.

Both Justice and Nicholas are private people, so they refrained from sharing much about their lives. And at one point, fans of the couple were also questioning if they were still together.

Well, today, let’s look at Justice Smith and Nicholas L. Ashe’s relationship and find out if the pair are still together.

Announced Their Relationship In 2020

The world stood still in 2020 due to the COVID-19 pandemic. And on top of that, the Black Lives Matter protests around the US, and other countries were also monumental. While this was all happening, actor Justice Smith came out and identified himself as a black queer man. He shared about his time protesting and chanting “Black Queer Lives Matter,” “All Black Lives Matter,” and “Black Trans Lives Matter.”

In addition to allowing people to know about his sexuality, Justice also shared a picture of him kissing the Queen Sugar star, Nic Ashe. Since both of Justice and Nic’s social media pages mostly revolved around their professional life, the bold post came as a surprise to many.

But Justice, who has starred in hit projects like Jurassic World: Fallen Kingdom, Pokemon Detective Pikachu, chose to not only talk about his relationship but also emphasize the lives of black people who are a part of the LGBTQIA community.

Shared Loving Message For Each Other

After coming out as queer and announcing their relationship, the loving couple shared love for each other on their respective social media. While the couple was relatively private, Justice and Nicholas did share cute pictures of them together on special occasions.

On the occasion of the Detective Pikachu actor’s 24th birthday, Nic penned a heartfelt message for his lover. Justice Smith’s boyfriend wrote that he felt safe, heard, inspired, and admired by the star. Nicholas also stated that he appreciated his partner’s authenticity and passion.

While the Queen Sugar star has since deleted the post, he did share his gratitude for his boyfriend and professed his love. Fans also fawned over the loving words, and some even crowned them as the cutest couple ever.

Justice And Nic Had Broken-Up

Aforementioned, Justice Smith and Nicholas L. Ashe are both private individuals so they kept much of their relationship to themselves. Moreover, the pair also rarely flaunted their relationship in front of the media. So, it came as a surprise when Justice revealed that he was no longer together with Nic.

While talking to Pride Source in early 2021, he announced the shocking news.

Justice Smith also talked about how his relationship with Nicholas L. Ashe opened him up. And the Paper Towns actor stated that while he and Nic were no longer together, he now knows that there is joy and love for a black queer man like him.

Are The Pair Still Together?

Justice Smith and Nicholas L. Ashe breaking up in early 2021 saddened many people. Unfortunately, the pair also did not reveal what went wrong between themselves. But to everyone’s surprise, they made their red carpet debut at the GQ Men of the Year Party in November 2021. Justice even shared a pic with his boyfriend on Twitter.

While they did break up, it seems like Nic Ashe and Justice Smith patched things up and are back together again. Justice has even shared a few pictures with his boyfriend on Instagram since.

While the couple is very private about their lives, we hope they open up in the future. And we wish Nicholas L. Ashe and Justice Smith a happy life ahead.