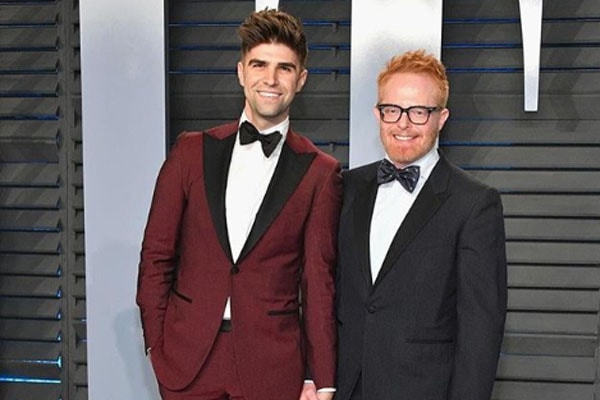 The handsome Justin Mikita is a lawyer, an actor, and producer. He bags credits for his works in Can’t Be Heaven, 8 and Culture Pop. The multi-talented Justin is happily married to his longtime boyfriend Jesse and living a blissful life.

The Modern Family star Jesse Tyler Ferguson and his husband Justin Mikita are stepping into the sixth year of their marriage, and they still share the same amount of love for each other. Indeed we can see them growing their passion for one another with each passing years. Justin is head over heels for Jesse, and so is Jesse for his handsome husband, Justin.

Both Justin and Jesse are open about their sexuality, and they are not hesitant about sharing their love in their social media. Their pictures are evidence that they are proud of who they are and they celebrate their pride. Justin is a cheerful person, but he seems even more happy around his hubby Jesse.

Justin and Jesse are making the best out of their lives enjoying every moment they spend with each other. We wonder when they are planning to make the family bigger. It seems like Justin is excited about having kids. He recently shared a photo of Jesse holding John Legend‘s son Miles Theodore Stephens with a caption that read ‘daddy practice.’ Did he throw a hint that the couple is planning for something big?

Justin Mikita and Jesse Tyler Ferguson are one of the proud gay couples and influencers for the LGBTQ community. Justin and his soulmate Jesse proudly presents their brand Tie The Knot whose sole purpose is to advocate for equal rights for the community through the world of fashion.

The couple has stepped up with a great cause with all their love for the LGBTQ community. We can see they are proud to be part of the community and speak for it.