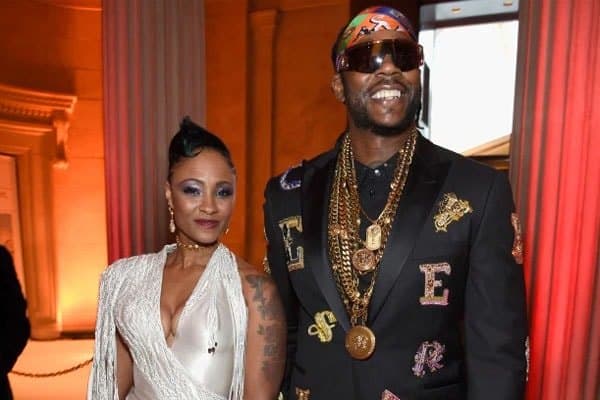 Kesha Ward is rapper 2 Chainz’ wife. Tauheed Epps aka 2 Chainz got married to his baby mama Kesha Ward on the 18th of August, 2018 at Villa Casa Casuarina, Miami. The pair has got three kids, two daughters named Harmony Epps and Heaven Epps and a son named Halo Epps.

Rapper 2 Chainz and his wife Kesha has been together since 2006. Even after 12 years of loving relationship, the love between them doesn’t seem to be fading away. 2 Chainz’s wife Kesha Ward is also known as Nakesha.

As mentioned earlier 2 Chainz is already married to wife Kesha Ward. The long-term couple exchanged vows just on August 18, 2018.  The matrimonial ceremony was held in Miami at Villa Casa Casuarina. The list of guests had some of the top names in the industry including Kanye West, Kim Kardashian, Lil Wayne, Alicia Keys, Gucci Mane and Swizz Beatz.

The “Sleep When U Die” singer 2 Chainz had proposed to his then girlfriend now wife Kesha Ward at Met Gala Red Carpet. It was 2 Chainz’ second proposal as he had already proposed Kesha in June 2013 at the BET Awards. The incident was really like a part of a romantic movie when 2 Chainz gets down on one knee.

2 Chainz’ wife Kesha was left with wiping tears as she was excited and shocked. She stated that it was crazy as she showed her engagement ring.

Like many folks out there, 2 Chainz also has got a small and blessed family. Along with his wife Kesha he has got three children. 2 Chainz’ eldest daughter’s Heaven is nine years old. And the other one Harmony is five, and his son Halo is aged two. We wonder if Lil Wayne’s son Cameron Carter has a good relationship with 2 Chainz’ kids like their fathers have?

If you go through 2 Chainz’ Instagram, then you will know how much he loves his children as he keeps on uploading their photos and the lovely moments he shares with his kids.

Wife of Rapper 2 Chainz, Kesha Ward is a little bit secretive. She is notoriously private. She has not got any social media handles. Rapper 2 Chainz’ wife Kesha Ward is the president of TRU Foundation  Besides that Kesha also owns a preschool and childcare facility named A Gift From Heaven in Atlanta, Georgia.