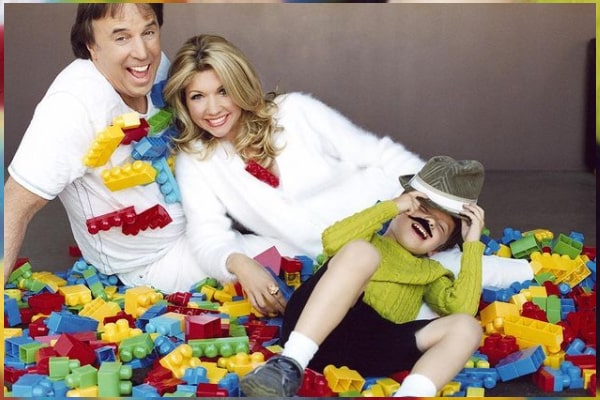 Kevin Nealon And Susan Yeagley have been married since 2005 and are a proud parents of one. Image Source: Susan's Instagram.

Several couples in the Hollywood industry prove that age is just a number and love is all that matters. Among such duos are Kevin Nealon and Susan Yeagley, who have an age difference of nineteen years. Nealon and Yeagley have been married since 2005 and still flaunt their love for each other. Furthermore, Kevin was previously married to Linda Dupree.

Kevin Nealon is an actor and comedian known for his role as Doug Wilson on Weed. Although Nealon’s wife, Susan Yeagley’s fame heightened after their relationship, she was doing pretty good for herself as an actress and model. Despite the age difference of almost two decades, Kevin and Susan have managed to keep their relationship pretty healthy and are considered the modern-day couple’s goals.

Therefore, here’s everything about the sweetest and the funniest couple, Kevin Nealon and Susan Yeagley.

Married In 2005 With 4 People In Attendance

Aforementioned, Kevin Nealon and Susan Yeagley make a beautiful couple. The pair have been together since 2002 and still share power, love, and passion for one another.

Many celebrities spend millions to have lavish weddings, but few choose to wed in small ceremonies. Among such couples were Kevin Nealon and Susan Yeagley. They held a small intimate wedding with only four people in attendance on 3 September 2005 in Italy.

Kevin and Susan exchanged vows in a 45-minute ceremony at the town hall with just four witnesses. Furthermore, the former Saturday Night Live star joked about following the Italian tradition of having a massive bottle of wine instead of having children soon. Interestingly, photographers crashed their wedding ceremony, assuming Matt Damon was there to marry his secret fiancée or it was Brad Pitt and Angelina Jolie‘s ceremony. Well, the incident is still a laughable moment for the couple today. Besides the massive age difference, the Nealon couple shares an indescribable love for each other.

Furthermore, Kevin shares pictures of his beautiful wife on social media, wishing her on special occasions. One thing to embrace about comedian couple is that they know how to joke and take things lightly. Kevin’s Instagram followers must be familiar with the pair’s antics as he once shared a video where Susan replied, ‘It’s in your best interest’ to Kevin’s ‘Love you.’ He posted the hilarious video on their 19th anniversary and thanked the lawyers for airtight prenuptial agreements.

Thus, love is very much alive and sparkly between the Nealon couple. Kevin and Susan’s paths crossed back in 2002 when they had their makeup done for a show. Cupid had done its work, and they tied knots three years later.

As stated earlier, Kevin and Susan were in no hurry to bring life on the Earth. When asked about following the Italian tradition of having children sooner, both laughed it off and said they celebrated with wine.

Kevin Nealon’s partner took time indeed. The budding actress at the time welcomed her first child, Gable Ness Nealon, in 2007. According to People, Susie and Kevin Nealon’s son was born on January 29, 2007, at St. John’s Health Center in Santa Monica.

Mrs. Susan Yeagley Nealon said that having a baby with a comedian husband is an experience. She was amazed to see no traffic when they were rushing to the hospital from their California home. During an interview, Kevin talked about his son being well-behaved because he is threatened to have siblings if he misbehaves. UNFAIR? Moreover, Kevin also praises his wife for being a wonderful mother and vice versa.

Kevin’s Desire To Be A Father Brought Them Together

Moreover, the couple’s desire to be a parent is what helped them bring together. Yeagley’s husband, Kevin, further believes that he was meant to be a father. He also revealed that he’d thought of adopting a child for the longest time. He continued that time and person was never right to have a child.

However, after meeting Rules of Engagement actress Susan, every piece came together, and thus the pair welcomed a wonderful baby boy. As mentioned, they met in a make-up room, and Kevin suddenly asked if a single guy can adopt a baby. Kevin Nealon’s spouse later confessed that it was either the worst pickup line or the best. Either way, it did the magic but couldn’t stop Susan from turning down the date that night, saying she had to ‘go break up with her on-and-off boyfriend the next morning. And then, the rest is history.

Kevin and Susan’s son, Gabel, is growing up with two of the entertainment industry’s funniest celebrities. Even today, Kevin Nealon and Susan Yeagley are happily married and proud parents. They further continue to support one another on both good and bad days. Therefore, let’s hope the happiness in the Nealon house continues to flourish in the coming days.