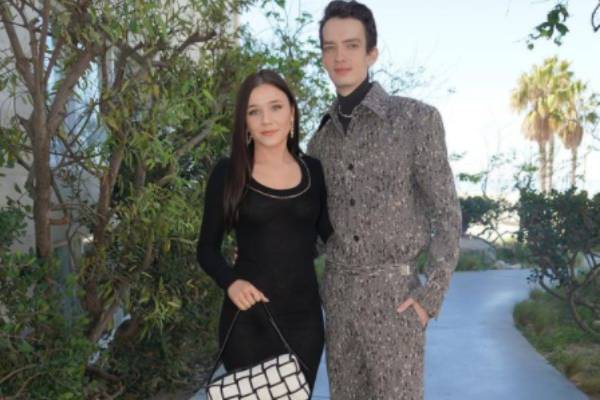 Kodi Smit-McPhee is a well-known actor who was born in Adelaide, Australia, in June 1996. The twenty-five-year-old star has already made a name for himself in Hollywood. Kodi first gained popularity as a child artist in the movies The Road and Let Me In. Since then, he has appeared in some big films like X-Men: Apocalypse, The Power of the Dog, etc.

Besides his acting career, Kodi is quite close with his family and loved ones. He is not the only one working in the show-biz industry from his family. His father, Andy McPhee, is an actor and former professional wrestler. Similarly, his elder sister, Sianoa Smit-McPhee, is also an actress and singer. However, Kodi’s partner is not from the entertainment industry and prefers to stay away from the spotlight.

Nonetheless, in today’s article, let’s get to know about Kodi Smit-McPhee’s girlfriend Rebecca Phillipou and the pair’s love life.

How Long Has The Couple Been Together?

Kodi Smit-McPhee’s loving partner, Rebecca Phillipou was born in September 1996. She has been with the actor since they were teenagers. Several sites suggest that the couple started posting pictures of video calling each other on their Instagram dating back to 2013. So, it seems the couple has been together for almost a decade now.

However, the love birds made their first public appearance in the latter stages of 2014. Kodi and Rebecca attended the red carpet premiere of the actor’s film, Dawn of the Planet of the Apes. Since then, the love birds have been spotted in public on numerous occasions.

Is Very Supportive Of Kodi’s Career

Since his initial days, Kodi Smit-McPhee’s girlfriend Rebecca Phillipou has been there for him. The pair fell in love while they were still teenagers. McPhee’s partner has seen the best and worst with him. But, most importantly, she has been his support system and supportive rock since day one.

In 2018, Kodi posted a picture on his Instagram account to wish his girlfriend on her 22nd birthday. Furthemore, he referred to Rebecca as an angel in his life who has helped him grow into the man he is today. Similarly, we can find many pictures of the pair in cozy and adorable poses on their respective Instagram handles.

Most recently, Kodi Smit-McPhee’s lover was spotted with him in the BAFTA awards at Royal Albert Hall in London. Kodi was nominated for the Best Supporting Actor role. However, his fellow CODA actor Troy Kotsur took the prize home. Despite that loss, Kodi must have had a great time since he had his girlfriend by his side.

Yes, Kodi’s partner has made many public appearances with him on some of the world’s biggest nights and functions. She has attended the SAG Awards, Oscars Dinner, and many of her boyfriend’s premiers. But, Rebecca Phillipou seems to be very reserved and private regarding her personal life. Besides the fact that she is dating the Power of the Dog actor, she hasn’t revealed anything about her family or childhood.

Furthermore, Rebecca is active on social media, but she has set her Instagram handle to private. Kodi Smit-McPhee’s girlfriend has around 6.5K followers on her account but it looks like Phillipou doesn’t want to share every detail regarding her with the world. But, most primarily, she is pleased with her relationship and love life.

Nonetheless, we wish Kodi all the best for his upcoming Oscars nomination and in his relationship. Let’s hope we get to see the actor marry his long-time girlfriend soon in the future.