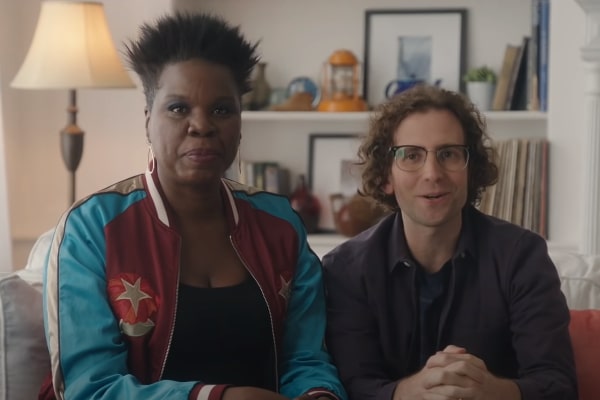 Leslie Jones and Kyle Mooney have their own sketch on SNL. Image Source: Social Media.

Annette “Leslie” Jones is an American actress and comedian who was a former cast member and writer on Saturday Night Live from 2014 till 2019. The 53-year-old even featured at the Aspen Comedy Festival and the Just for Laughs festival in Montreal.

The SNL alumni has also landed some big-screen appearances in Ghostbusters, Masterminds, and most recently in Coming 2 America alongside the talented Eddie Murphy. She also had her one-hour comedy special broadcasted on Showtime called “Problem Child” and has her own Netflix special. Despite having such a successful career, Leslie Jones‘ relationship is completely the opposite.

The Primetime Emmy nominee is heavily linked with her SNL co-star Kyle Mooney. Many fans even consider them as husband and wife. Below, let us explore this matter and figure out who Leslie Jones’ husband might be.

One of the biggest names in SNL, Leslie Jones, has always kept a low profile regarding her dating life. During her SNL run, the “Leslie & Kyle” sketches gathered much attention as Kyle Mooney and Jones acted as couples.

Fans started speculating whether the Ghostbuster actress and Mooney were off-screen couples as well. Mooney is also an actor, writer, and comedian known for SNL and his work in movies like Zoolander 2, Brigsby Bear, and Playing it Cool.

The 36-year-old has also landed a role in the fan-favorite show Arrested Development alongside Jason Bateman and Will Arnett.

Leslie Jones and Kyle Mooney are not married and never shared any form of relationship, to put it short. They consider themselves good and goofy friends.

Also Read: Are KiKi Layne And Michael B. Jordan Dating

The Leslie & Kyle sketches in SNL were the main instigator for making people think of Kyle Mooney as Leslie Jones’ husband.

When the natural comedian made her return for the long-running SNL sketch that aired in May 2019, it really left the fans wondering whether there was more than just the act.

The Brigsby Bear writer even commented on how the public thought they were actual couples, but unfortunately, they aren’t together.

Starting as a standup comedian in 1987 to becoming one of the 100 most influential people in the world by Time magazine in 2017, Jones has established herself as a comedic icon.

Despite her long career, the former SNL cast has never revealed her dating status. Due to the absence of male figures in her life, many questioned the 53-year-old’s sexuality.

The rumors of the comedian being gay were short-lived as Jones made it clear about her orientation and would even joke around the topic. Moreover, her willingness to be in a relationship with a man clearly dissolves this speculation.

Despite her involvement in the showbiz industry for decades, the news on Leslie Jones’ dating life never made any headlines.

In 2017, the black-blue comedy artist tweeted about having a secret boyfriend and hiding him away. Eventually, she would make it clear by stating the truth and also her terrible luck with men.

Kyle Mooney’s on-screen partner also gave a brief idea of the qualities she looks in a man for her to date.

During her appearance on Conan, the star mentioned –

” I’ll tell you the type of dude I like. I like a dude that can make me laugh, and surprisingly it’s not hard to make me laugh, because I think the goofiest things. I love goofy men!”

There you have it, the qualities one must possess to become Leslie Jones’ date.

Despite the rumors of Kyle Mooney as Leslie Jones’ husband, the comedian is still single. The SNL veteran is 53-year-old and taking things slowly by waiting for the right one.

She might be single but isn’t looking to rush things. One main reason for her singlehood might be her busy schedule, especially when you are SNL alumni. Take the example of Andy Samberg, a former SNL actor, and writer who mentioned: “there is no sleeping when you work for SNL.”

Getting ready for my update while @dennisbailey does my hawk!! @nbcsnl #lovemyhawk

Since Leslie Jones is already piled up with future projects, we may not be seeing her date anytime soon.

Nevertheless, Leslie Jones has an accomplished career starting from humble beginnings. Despite not having luck with men throughout her career, the comedian is loved by her fans.

We wish Leslie Jones the very best for her career and upcoming projects. We also hope to see her find someone perfect in the days to come.