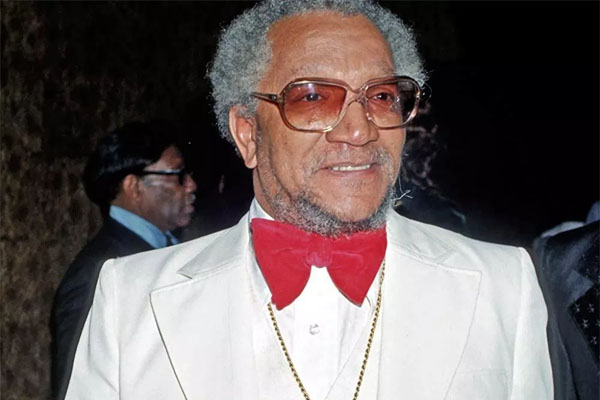 John Elroy Sanford aka Redd Foxx had a net worth of -$3.5 million. Probably, it might come as a surprise for the people who are not familiar with the negative net worth of huge celebrities. He was in a massive debt of $3.5 million during the time of his death.

Talking about Redd Foxx, he was an American stand-up comedian and an actor as well. He was known as the ‘King of the Party Records.’ It was because the comedian accomplished more than 50 records in his lifetime. Likewise, he also starred in many Tv shows such as Sanford and Son, The Redd Foxx Show and The Royal Family.

Similarly, he played significant roles in lots of movies. Due to his progress, he was able, to sum up, a tremendous amount of money in his early days of his career. Redd Foxx reached a certain height where everyone would call him a celebrity star. His net worth increased massively and maybe enjoyed his life lavishly and slowly by slowly everything turned.

The Occurrence Of Financial And Tax Problems For Redd

People magazine reported that Foxx once had collected $4 million in a single year. Perhaps it was not a normal thing to have that enormous net worth in the 20th century. But Redd Foxx was that kind of person who always wanted the beautiful life, free of problems.

The late Redd Foxx spent most of his money to get a rich life. Was it the fate or his fault? But Foxx’s lousy management of cash led to the start of his life’s devastation. The problems arose, even more, when he paid $300,000 to his third wife as a divorce settlement in 1981. As Redd Foxx had not paid his income taxes, the IRS filed against his property which was valued over $755,166.21 in between 1980 and 1986.

On 28th November 1989, the IRS seized his Las Vegas Home and seven vehicles. By then Foxx’s tax had increased up to $996,630 including penalties and interest. The comedian touched the sky and fell off to the ground in no time. At the time of his demise in 1991, Foxx had a massive debt of $3.5 million, so by his death, Redd Foxx’s net worth was -$3.5 million.

After all the hard work Redd Foxx had done, he got the name as well as fame. The comedian married four women; Evelyn Killebrew, Betty Jean Harris, Yun Chi Chung, and Ka Ho Cho respectively. Also, he adopted Betty Jean’s daughter, Debraca Denise which she had from her previous relationship.

The fact that Redd Foxx married four women can signal us that he could have been wealthy due to which he could lure women. Also, he may have spent millions of dollars just for his marriage ceremonies. Even he might have wasted chunks of cash to settle his divorce with all of his wives.

Well, not just Redd but almost everyone was shocked seeing his downfall. Despite the fact, Redd did enjoy a lavish lifestyle.