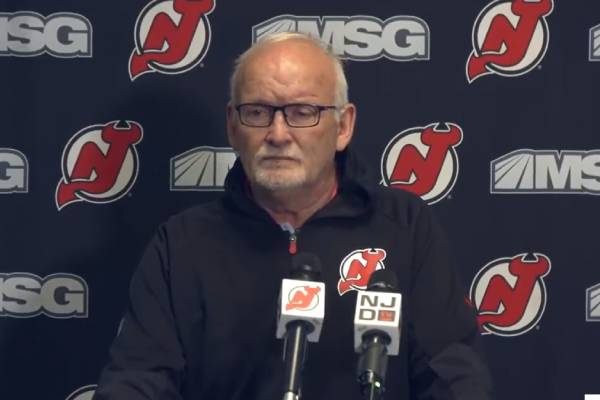 Born Lindy Cameron Ruff, Lindy Ruff is the current head coach of the New Jersey Devils of the NHL. Prior to that, he was the coach of the Buffalo Sabres and Dallas Stars. Ruff is one of the most talented coaches in the league. In addition, he is also a former ice hockey athlete who played for nearly two decades.

With all that being said about his professional life, let’s take a look at the New Jersey Devils coach’s personal life. Well, he is a family guy with a few kids. He has been married to Gaye Ruff for a few decades now. So, who is Lindy Ruff’s wife? Let’s get to know more about her in today’s article.

Gaye Ruff came into the spotlight for being the spouse of a renowned NHL coach. The adorable couple has been married since 1985. It has been nearly four decades, and the duo has created a beautiful family of six. Also, Lindy Ruff’s wife is from Lethbridge, a city in the province of Alberta, Canada.

Additionally, the former athlete played for the WHL team Lethbridge Broncos. At that time, he used to stay in Montana, which is not far away from the Lethbridge. So, during his vacations, he used to join Gaye’s family.

The lovebirds have been together for several years now, and they share a solid bond. Their deep love and affection for each other must have been the secret behind their long-standing marriage.

Also Read: About The Fairytale Style Wedding Of Shelby Blackstock And Marissa Branch

The Ruff Family Spends Their Summer In Montana

The Ruff family often visits Whitefish lake in Montana. In an interview with The Athletic, Gaye’s husband said that it became a place for them to get away from things. Their four children also love to spend time at the lake fishing and chilling. Wake surfing is another popular activity in the Ruff household.

Although everyone is busy with their own lives and schedules, Gaye and her family members seem to spend a lot of quality time together. In addition, they must share a close bond with each other.

As already mentioned, Gaye and her husband have been together since the mid 1980s. Apart from marital bliss, they are blessed with four amazing kids. Gaye and Lindy Ruff’s children are Brett Ruff, Eryn Ruff, and twins Madeleine Ruff and Brian Ruff. All of them have grown up and must be doing well.

The Ruff couple’s youngest kid, Madeleine, earned her doctorate in Occupational Therapy/Therapist from Belmont University in Nashville in 2020. She also has a degree in Behavior and Health Science from Boston University.

Furthermore, Lindy Ruff’s daughter, Madeleine, underwent brain surgery in March 2006 at a Buffalo hospital. The doctors performed the surgery successfully to remove the tumor from her brain. Currently, the Belmont graduate is healthy and doing well.

Moreover, Gaye and Lindy Ruff’s son, Brian, was born on 16 August 1994 and has followed in his footsteps. He was the player of the ice hockey team, Buffalo Jr. Sabres. On the other hand, Brett is a coordinator of the Hockey Administration at Buffalo Sabres. However, not much is known about the coach’s daughter Eryn.

Despite all the fame, Gaye has successfully kept her life away from media scrutiny. She seems to prefer to avoid unnecessary attention from the media. Additionally, she is rarely active on any type of social media platform. Meanwhile, Gaye Ruff’s husband is active on Twitter but does not post much. Furthermore, the former has not disclosed any details about her profession. Regardless, the loving spouse must be doing great in her life.

Nonetheless, Lindy Ruff’s wife seems to be living a comfortable life with her family. In addition, she is supportive of her kids’ careers. Hopefully, she will come at ease and reveals more about her professional life in the coming days.