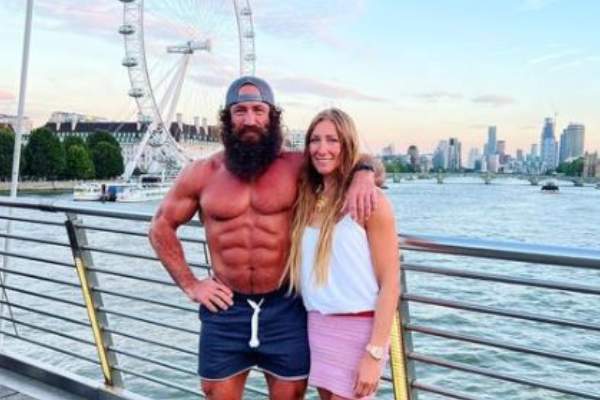 Liver King is a popular social media personality. Born Brian Johnson, he is an influencer and self-styled “CEO of the ancestral lifestyle.”  He is known for his TikTok and Instagram videos, in which he submerges himself in ice baths, generally does the kind of treatment to his body that is prohibited under the agreements of international human rights and drags weight down his driveway using only his teeth.

Apart from a successful career, King enjoys a blissful marital life. He is happily married to Barbara Johnson, who goes by the name Liver Queen. Fans must be wondering if she follows his diet or lifestyle. So, in this article, let’s know more about Liver King’s wife and what she does.

As mentioned earlier, Barbara is Liver King’s spouse. The couple met in 2004. At that time, Barbara Johnson’s husband had dropped out of medical school and had made enough money after working for a pharmaceutical company. With the help of that money, he was involved in expensive outdoor activities like snowboarding. The duo met while snowboarding.

Reminiscing the first time he saw his lovely partner, Liver King shared that she was doing kettlebell squats in the garage. In his own words, before he met her, he was a lesser man who never flushed toilets in public restrooms and threw his gum out on the street. Before meeting Barbara, the social media influencer was good at being a man; after meeting her, she made him a good man.

Unfortunately, it is not known when the lovebirds tied the knot. But, Liver Queen wishes her hubby their anniversary in August. Nonetheless, it must have been a wonderful journey for the Johnson couple. We hope we learn more about them in the coming days.

Furthermore, the married pair often shares lovely pictures and express their love and admiration. The pair do not shy away from showing off their bond.

Liver King’s Wife Is A Proud Mother Of Two

It has been many years since Liver King and his lovely wife tied the knot. In all these years of being happily married, the duo has welcomed two children together. Liver King’s son, Stryker Johnson, is the eldest, whom his other half gave birth in 2007. Then, in 2009, their baby boy, Rad Johnson, was born.

Both of Liver King’s sons follow his diet. They often make appearances in his videos, where they could be seen lifting huge weights and eating various animal organs. Furthermore, as per Barbara Johnson’s husband, it all started because of the kids. When they were young, the children were in and out of the hospital with allergies and illnesses.

Then, Brian read Sally Fallon‘s book, Nourishing Traditions: The Cookbook that Challenges Politically Correct Nutrition and Diet Dictocrats and made a decision to implement some of its findings. Then, the family of four cut out all the liquid calories, processed foods, and seed oils. They began eating whole foods, mainly bone marrow and liver.

After that, Barbara Johnson’s children’s health drastically improved. Within a few days, the ring around their eyes disappeared. They all enjoy comfortable lives now.

Also Read: Know What Disease Does Shannon Bream Have

Barbara Was A Dentist

Liver King’s wife mainly came into the limelight after marrying him. Therefore, many might wonder if she was into the influencer thing from the beginning. However, that is not the case here.

Barbara previously worked as a dentist. The pair opened a successful dental practice together. However, the name of the practice has not been revealed yet. But, as per an article, the blonde beauty has a DDS degree, and she led Dentiq Dentistry in Houston, Texas. It is a group of general practitioners and specialists with a proven track record that has established it as a top comprehensive cosmetics and implant dental center.

Barbara’s work was loved by many of her clients, and she received positive reviews. However, Liver King’s other half moved from being a dentist to selling nutrition supplements supporting the “ancestral lifestyle” with him. The duo runs the company, Ancestral Supplements, which brings in more than $100 million every year.

The answer is yes. As mentioned earlier, they started their living style all because of their kids. Just like her hubby, Barbara also eats the same diet as him. As a result, the fans nicknamed her Liver Queen.

The couple has left eating processed meals for more ancestral nutrition, consisting of liver, seasonal fruits and vegetables, bone marrow, and others. She is often seen with him in several of his videos and supports her partner throughout every venture.

All in all, Liver King’s wife is a supportive lady, and the duo seems to be enjoying their blissful life together. We hope to see more of their work in the coming days. Hopefully, they will have happy days ahead. Did you know recently there has been news that Liver King uses steroids? It’s not known whether it’s true.