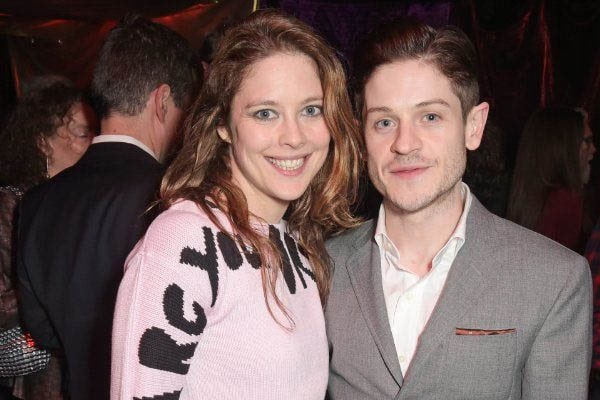 Iwan Rheon is a famous Welsh singer, actor, narrator, and musician. Mainly, he is known for portraying the role of Ramsay Bolton in Game of Thrones and Simon Bellamy in E4‘s Misfits. Also, Rheon played the role of Mick Mars in the 2019 movie based on Motley Crue named The Dirt. Other notorious films starred by Iwan Rheon are Vicious, Riviera, and Inhumans. Besides, Rheon was a lead singer in The Convictions until he left the band to pursue his career as an actor.

The lead actor in the philosophical radio play Darkside, Iwan Rheon, leads a normal life of love. He is in a romantic relationship with a female drummer, Zoe Grisedale. Their romance has crossed over six years, and still, the two are so much in love with one another. Here, have a look into the love life of Iwan Rheon and Zoe Grisedale. But, before that, learn who Iwan Rheon’s girlfriend, Zoe Grisedale is.

Iwan Rheon’s girlfriend, Zoe Grisedale, is an award-winning producer. She is the founder of an independent production company named Grisedale Sherry Productions which focuses on championing women in film. Her company mentors women in film and shares their skills. Besides, Zoe is also a screenwriter and director.

Before founding her own production company in 2017, Iwan Rheon’s girlfriend, Zoe Grisedale, was a voiceover artist at Earache Voices Ltd. She has voiced for several audiobooks, commercials, and computer games. Also, Zoe is a former actress who has played in numerous web series and TV series, including Do NOT FEED THE PIGEONS, SUM1, Straggler woman, and many more.

The Kingston University graduate, Zoe, was also a drummer for multiple girls’ bands. Moreover, she was also a stand-up comedian and commercial model at a couple of agencies. Besides, Zoe served as an afterschool drama teacher for young kids for two years. But, currently, she is actively involved in her production company.

The versatile actor and singer Iwan Rheon is deeply in love with his gorgeous girlfriend, Zoe Grisedale. Both Zoe and Iwan never hesitate to flaunt their love for one another via their respective social media handles. Besides, they never miss out on any chance to show their appreciation for one another and how lucky they feel to have each other in their life. Recently, Iwan reflected on the love for his beau, Zoe, by naming his album ‘Dinard.’

Dinard is a city in France where Iwan Rheon and Zoe Grisedale met for the first time. They encountered one another at the Brittany resort and went skinny-dipping on their first meeting and are together ever since. And ever since then, the beautiful couple often appears on the red carpet and other public events together.

Aforementioned, both Iwan Rheon and Zoe Grisedale often share photos together on their respective social media handles. Their social media posts about one another depict how lucky they feel to have each other in their life. The star actor, Iwan, addresses his girlfriend as Angel and Lady Madonna while uploading her pictures on his social media wall.

Seeing the love and chemistry between Iwan Rheon and Zoe Grisedale, it seems like the two are planning for marriage soon.

The intimate relationship of Iwan Rheon and Zoe Grisedale has not just given them the pleasure of having an understanding and caring partner but has also blessed them with an adorable son. The pair welcomed their first child together in August 2018. Zoe had announced the arrival of the new member of their family via her Instagram page.

Though the overly concerned dad, Iwan Rheon, rarely shares photos of his little one, his girlfriend, Zoe, frequently posts their son’s pictures on her Instagram. However, the couple has not revealed the face and name of the youngest Grisedale-Rheon family member yet.

Currently, the romantic pair, Iwan Rheon and Zoe Grisedale, are living a happy life with their son in London.