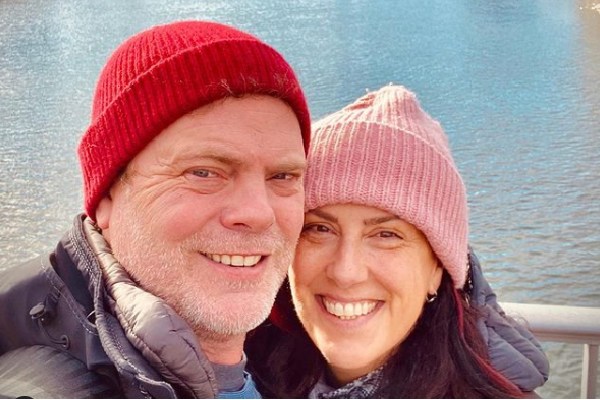 Rainn and Holiday have been married for more than two decades. Image Source: Instagram/holidayreinhorn.

Rainn Wilson is a well known American actor, writer, and producer. He is best known for his role as Dwight Schrute on the NBC sitcom The Office, for which he earned three consecutive Emmy Award nominations for Outstanding Supporting Actor in a Comedy Series. His career has been an incredible journey, which saw him take on some iconic roles.

While Rainn’s professional career has been his highlight of life, his personal life is also nothing short of juiciness. Rainn Wilson’s wife Holiday Reinhorn, who is a writer mainly known for Big Cats, is married to him since 1995 and the couple is showing no signs of stopping. Let’s get into more details about this wonderful couple through this short article.

Rainn Wilson married his wife Holiday Reinhorn in 1995, and the couple has been together ever since. Even more interesting thing about them is they are each other’s, college sweetheart. The couple first met during an acting class in the mid-1980s at the University of Washington. After a few years, they started dating and finally tied the knot at Washington’s Kalama River on June 30, 1995.

The wedding was nothing short of unconventional, like Rainn’s iconic role in The Office. The guests were ushered to the ceremony spot by a bagpiper playing ‘Amazing Grace’ while Rainn Wilson’s wife Holiday wore white go-go boots and a minidress. And the ceremony reached its end with the couple jumping into the river.

The relationship between Rainn Wilson and Holiday Reinhorn is going ever so smoothly to this day. They can be seen spending most of their time together, even with a tight schedule with their job. They have been truly the best partner for each other and will continue to do so for the rest of their lives. Let’s hope the couple stays like this for eternity.

Rainn described Holiday and his relationship as a collaborative one. Rainn serves as the editor for all Holiday’s stories while she lends her support during all his auditions. Furthermore, according to Rainn, she is a good writer and okay actor, and he is a good actor and okay writer. The couple’s interconnected professional life has also made it easier for them to understand each other.

Rainn’s most recent work has been acting in TV shows like The Power and Utopia and producing the Netflix docuseries. We Are the Champions. Meanwhile, Rainn Wilson’s wife Holiday was the narrator of The Bluff Creek Film Project in 2018 and was a writer for the 2017 short drama Push.

Rainn Wilson And Holiday Are Parents Of One

After almost a decade of being married, Rainn Wilson and Holiday Reinhorn gave birth to their only child Walter McKenzie Wilson. Rainn Wilson’s son Walter was born in 2004, shortly before he got his role in The Office. So, Walter may have been the lucky charm for his father Rainn, who changed his life. Although Walter is almost an adult now, he has remained pretty much away from the spotlight for his own good. Rainn and Holiday must have thought that it is for his own best that he stays away from the unnecessary media attention.

The recently turned 16-year-old Walter completes the Wilson family. The pair of Rainn Wilson and Holiday Reinhorn is making no compromises regarding their son’s growth.

The Couple Spends Quite A Lot Of Time Traveling Together

As we go through Rainn and Holiday’s social media handles, we can already see that the couple loves to travel together. From going on vacations to traveling for shooting, these two are inseparable. The couple shares pictures of themselves every now and then on social media for fans to swoon over. This just shows how wholesome they have been throughout their life.

Even though Rainn and Holiday’s travel plans might have had a huge setback due to the pandemic, the couple has found ways to stick with each other. With their relationship getting stronger day by day, we are bound to get more of their holiday diaries soon.