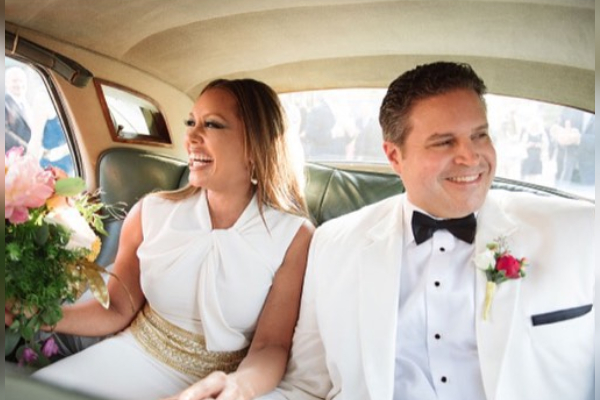 Former Miss America Vanessa Williams finally found success in love with her third marriage with Jim Skrip, an American businessman. Vanessa and her other half’s journey together has been quite interesting so far.

People were stunned with how a retired accountant and a former Miss America ended up together. The gorgeous pair defies the odds as they are not from the same field or the same statures.

With all that said, below, we have discussed some takeaways from the oddly suited couples regarding their love life.

Jim Skrip is an American businessman, real estate agent, and a former accountant for many firms. Vanessa Williams’ spouse only came to people’s attention after the couple confirmed their relationship.

Apart from that, Jim is a mystery man. There is very little information regarding his personal life before meeting his evergreen wife. What we know is that the former accountant is from Buffalo, New York, and is of Mexican origin. As per his personality, Vanessa Williams’ husband, Jim, is very open-spirited and a good listener.

Jim’s nature helped him out as it worked well when he met his future wife for the first time.

They First Met At “The Gift Of The Nile”

Though both lived in New York, Vanessa Williams and Jim Skrip encountered each other for the first time miles away on a cruise in Egypt. The three times Primetime Emmy Nominee was on vacation with her daughter from her second marriage, Sasha Gabriella Fox, and Skrip all alone.

Surprisingly it was the former accountant’s T-Shirt that played the cupid’s role. The soon-to-be lovebirds indulged in a very engaging conversation since Williams’ mom was from Buffalo and Skrip, a native from there.

End of the night next to my beau, Jim. Now back to #Boston for the final show of #TripToBountiful. #GagaTurns75

So much so, the “Save The Best For Last” singer even invited the Buffalo native for dinner on the same night. After a three hours long conversation, they ended up developing special feelings for each other. Vanessa and Jim frequently met even after their vacation and eventually started dating after a couple of months.

The Engagement & The Cushion-Cut Diamond Ring

The broadway actress would reveal small bits regarding her love life with the real estate agent in her interviews with leading tabloids. Vanessa mentioned how her partner had accepted her past and the way she is. The mother of four also posts often regarding her love and affection for her beau on social media.

The 58-year-old’s engagement would gather more attention after revealing her custom-made ring that had expensive written all over it. The cushion-cut diamond placed center of a platinum halo with two half-moon-shaped stones on either side ring was exclusively designed by Buffalo-based jewelry designer, Bomi.

Marrying Lavishly Not Once But Twice

Jim Skrip and Vanessa Williams’ matrimony took place beautifully on the 4th of July 2015 at St. Stanislaus Church in Buffalo. The Egyptian-themed ceremony had a limited number of guests that consisted of family and friends, the marriage had an Egyptian theme.

Vanessa wore a gorgeous white gown designed by Carmen Marc Valvo. Jim, on the other hand, looked handsome in a white tuxedo from the same designer. The wedding was also planned by New York’s finest wedding designer, Carla Measer-Costamagna, and was beautifully captured by Shutter Dream Studio. Not to mention their wedding invitation card was customized by Gian Invitations, an Australian company.

Their second marriage took place the following year on May 30 because Jim had not annulled his previous one. It took place in the Eraser actress’s hometown, Chappaqua, New York, where the couple followed a proper catholic ceremony.

Vanessa had a Pamella Roland‘s V-neck grown with a pink sash around her waist for this ceremony. As for Skrip, he chose a classic black pantsuit combo with a light pink tie.

Jim Skrip’s wife who has been in the spotlight since 1983, is not a new face in the gent’s department. On the other hand, the businessman only became popular after his relationship with Vanessa was revealed to the world.

The multi-talented star in her long and illustrated career has been linked with stars like Michael Jordan, Arnold Schwarzenegger, Sam J. Jones, and Rob Mack. The Desperate Housewives star had married twice previously before settling with her current partner.

Raymon Hervey II, hired to do the job of damage control ie publicist for Vanessa would marry her in 1987. The pair had two daughters; Melanie Hervey & Jillian Hervey, and a son; Devin Hervey. After ten years through thick and thin, the pair separated legally.

The retired NBA player Rick Fox was Vanessa’s second marriage that lasted for five years. Their marriage gave the former couple a daughter, Sasha Gabriella Fox. Distance was the major factor to why the Canadian-Bahamian basketball player and the first African-American Miss America separated. Now divorced, both Rick and Vanessa have moved on with their lives.

The New York native also isn’t shy of sharing her experiences often regarding her three marriages, as in the video above. The talented American personality might have had a rocky, unstable relationship in the past but her current one is sailing smoothly now.

The couple is currently residing in Depew, Buffalo, New York, along with Sasha, Vanessa’s daughter from her second marriage. However, there is no information as to whether the real estate agent has legally adopted the remaining three children from her previous marriages.

Looking into the 1984 Miss America social media platforms, she seems to be enjoying a very healthy & happy life with her loved one. On the other hand, Vanessa Williams’ husband, Skrip, is not active in any but is a regular face on his wife’s social media.

The couples, who both are above 55, have not planned on welcoming a baby of their own. They are happy with how things are currently. Vanessa might not have had success previously, but as the singer of “Save the Best for Last,” she sure seems to agree with the title.