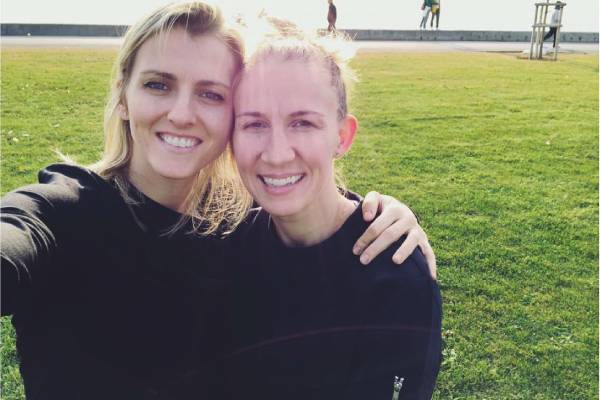 Allie Quigley and Courtney Vandersloot are one of the most recognizable pairs in the sports world. The love birds are professional basketball players currently playing for the Chicago Sky of the Women’s National Basketball Association (WNBA). They have gained significant fame and success in their respective career.

Due to their success on the court, fans are curious to learn about the love life of the WNBA power couple, Allie and Courtney. So, here are some facts about the marital life of Allie Quigley and Courtney Vandersloot.

How Did The Couple’s Relationship Start?

As mentioned earlier, Allie Quigley aka Alexandria Quigley shares a blissful marital life with Courtney Vandersloot. The pair met for the first time during the 2012-13 Euroleague season when they were playing in Slovakia. During the five-game series, Allie’s team, Kosice, faced off with Courtney’s team, Ruzomberok. The team Kosice won the match and became Slovakia’s champion.

After the season, both women were returning to Chicago, Courtney her third year with the Chicago Sky while Allie was invited by the team for training camp. In the 2011 draft, Vandersloot was the No.3 pick and had been the West Conference player of the year thrice at Gonzaga. Similarly, Allie had also played for the five WNBA teams in the four-season since 2008. She was considering quitting basketball after she went unsigned in 2012.

While returning to the USA, the pair was in the same plane, including the same car from the airport to the office of the doctor for team physicals. They began to get to know each other en route, and after being selected for the team, they acknowledged their mutual feelings. However, the love birds decided to take a step further in their relationship only after the WNBA season was over.

The couple began dating in the late September of 2013. They had to be in a long-distance relationship as Allie was in Poland and Courtney was in Hungary. With time, the duo let their teammates and coaches know about their relationship.

A Beautiful Wedding In 2018

The couple’s relationship had been going strong. In June 2017, Courtney decided to take a step further in their relationship and proposed to her girlfriend of five years. The couple went to a small resort in Zion, where they got a massage. After that, Courtney set up a projector to play a video, made a playlist, and even planned the route that they’d take in her block Jeep.

The lovebirds traveled to a nearby beach, and there she proposed to Allie with a vintage-inspired ring.

They got hitched on December 27, 2018. The engaged pair walked down the aisle in a wedding ceremony attended by their friends and family in Seattle. Their teammates, Gabby Williams and Diamond DeShields, attended their wedding. Sadly, two weeks before their wedding, Courtney jammed her ring finger during a match. So, she had to wear her wedding band on her right ring finger.

The duo shared the news of their marriage via Instagram. As of 2021, it has been three years since the adorable couple tied the knot. Their marriage is still going strong. The spouses often gush about each other in different interviews.

Furthermore, the couple also does not refrain from posting about each other on their social media. As for expanding their family, the married pair have not talked about kids, but there’s no doubt that they will be great parents.

Are Enjoying Their Life Together

Despite the fame that the couple has gained, Courtney and Allie prefer to keep their lives private. However, they revealed a few tidbits about their life in a rare interview with SI. The couple revealed that, after their engagement, they bought a split-level house in Deerfield.

At that time, the only furniture that they had was a beanbag chair and they gradually added other things to their home. They also have two dogs named Romeo and Gemini. Despite the home being a perfect space for them in 2019, it is unclear if the pair still resides in Deerfield.

Nonetheless, the WNBA’s power couple is living a great life and are spending quality time together. We hope that Allie Quigley and Courtney Vandersloot’s marriage, remain the same, and wish them success in both personal and professional life.