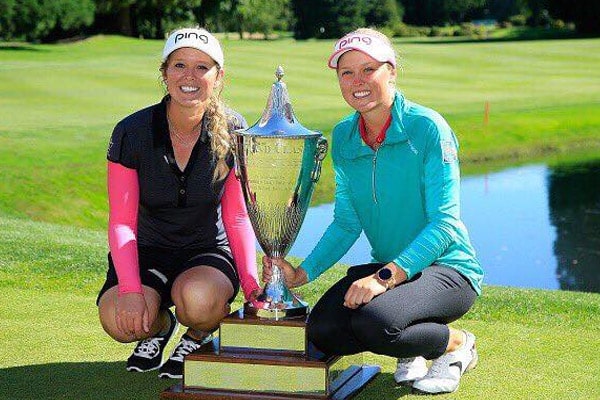 Brooke Henderson is one of the most successful Canadian golfers playing on the LPGA Tour for many years. She is the winner of various titles and championships, including the KPMG Women’s PGA Championship and the Canadian Press female athlete of 2015, 2017, and 2018. And Henderson gives the credit for her success as a professional golfer to her family.

Brooke Henderson grew up being influenced by her dad, Dave Henderson, and sister Brittany Henderson who are also in golf. Here, in this article, we will be divulging the lovely relationship between Brooke and her eldest sister, Brittany. So, please keep reading to learn the bonding between these two Henderson Sisters.

Since turning professional four years ago, Golfer Brooke Henderson is breaking records and climbing leaderboards. But all the while-through, the laughs, travels, and wins, her older sister, Brittany, have always been there in every step. Brittany is Brooke’s primary caddie since her sister turned professional at the age of 18, making her the most famous caddie in Canadian golf. She is one of the main reasons behind Brooke’s quick rise to the top of the Canadian golfing world.

The elder Henderson, Brittany, not only guides her little sister being her caddie but also through her life’s challenges as a professional golf player. She is also the best friend of Brooke. They travel around the globe together, breaking the records in golf and having fun experiencing different cultures simultaneously.

Brittany carries Brooke’s 35-pound bag (sometimes more with extra equipment) with a smile during her golf tournaments. Along with it, the Henderson sisters share jokes while they play to make the game more fun. Moreover, Brittany also books hotels and flights and does a lot for her sister, Brooke. She is a significant asset to Brooke Henderson’s game.

Brooke’s big sister not only helps her in the game but also allows her to manage the psychological aspects of golf. Being a Caddie, she knows what to say to her golfer sister at the right time while playing.

Brooke has her best friend, and the biggest mentor, her sister plus caddie Brittany, always there by her side. Growing up together, Henderson siblings always pushed each other to be better. And they are continuing to do that in and out on tour and try to have fun while doing it.

Brooke Henderson’s sister, Brittany Henderson, was also a top junior and college golfer. In South Carolina, she went to Coastal Carolina University, where she played as a standout on the golf team. Carolina University inducted Brittany into the school’s Hall of Fame in November 2018. She is just one of nine golfers inducted into the school’s Hall of fame, including former world no. 1 winner Dustin Johnson.

While attending Coastal Carolina from 2009-2013, Brittany won various titles and awards in several tours, including the Suncoast Tour and Symetra Tour. Similarly, she also played on the LPGA Tour a handful of times before being caddie of her sister, Brooke.

Brooke And Brittany Acknowledge Their Parents for Their Success

The Henderson family’s younger offspring, Brooke Henderson, already had nine career professional wins, with 49 Top 10 finishes. Likewise, former golfer Brittany also bagged numerous wins during her career as a golfer and is the most successful female caddie in Canadian golf. And, both sisters credit their success in the golf course to their mom and dad.

Brittany and Brooke appreciate everything their parents did for them. There were a lot of sacrifices their mom and dad made early in their life. Their dad plus golf coach, Dave, encouraged them to hit golf balls from a young age. He used to pay them a nickel with each golf shot they made. And to date, their father, Dave, is their golf coach.

Brooke and Brittany’s mom, Darlene Henderson‘s role in their success, should not be forgotten either. Although she is not in golf, she supports her daughters in their career in golf. Darlene attends the golf events participated by her little princesses and encourages them.

Brooke and her sister, Brittany, are grateful to have such a motivating and caring parents. And most of all, both sisters feel blessed to have each other in every up and down in their life. Their lovely relationship is an excellent example of bonding between sisters, and we hope it continues for eternity.