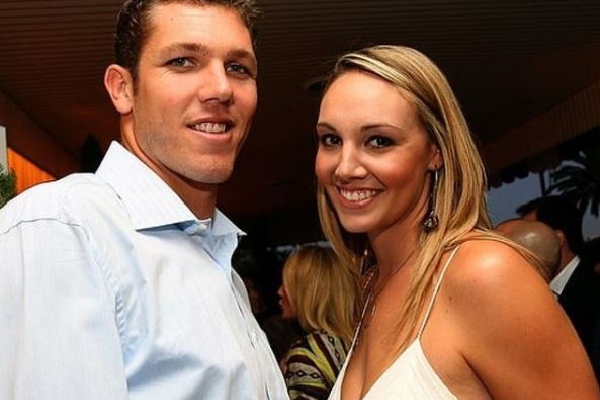 Luke Walton is an American professional basketball coach who is currently serving as the head coach of Sacramento Kings in the National Basketball Association (NBA). Luke comes from a family with a basketball background since his father, Bill Walton, was also a basketball player himself.

A lot is known about his career, both as a player and as a coach, but the personal side of his life remains under the shade. Luke got married to Bre Ladd, who is an international volleyball player in 2013. In this article, we will be talking about Bre Ladd and how this marriage affected her career.

Luke Walton’s wife Bre was born on 19 April 1984, in Tucson, Arizona, USA. Her family consisted of father Bob Ladd, mother Tammie Ladd, and an older brother Josh Ladd. Bre went to Del Oro High School, and that’s when she started to make a mark. She has a degree in Community and Public Health from the University of Arizona. She also served as the main middle blocker for the Club Cactus during her college days. Ladd also worked for the College of Deaf and Blind and had mastered the skill of sign language. She helped the physically impaired students to communicate better.

She is a beautiful Caucasian with blonde hair and brown eyes. The gorgeous Bre has a fit figure, which is very obvious given her sports background. She stands 6 feet 1 inch high and is very often praised for the way she presents herself.

Marriage And Children Of Bre Ladd And Luke Walton

So this is how the story started. Bre and Luke were both student-athletes at the University of Arizona. They met in 2002, during a sports event, but ‘sparks didn’t fly.’ They started dating only after three years, i.e., in 2005. And finally, after seven long years of dating, the couple got engaged. Luke popped the question during Christmas eve. While speaking on this, Luke Walton’s wife Ladd said:

“He put a jewelry box inside of a really big box, and I assumed he’d gotten me the earrings I’d asked for. I opened the box and saw my ring, and was so genuinely shocked, even after all that time.”

And the trick didn’t fail; Ladd had to say yes. The couple shared their I dos on August 17th, 2013, in Aspen, Colorado.

Soon after a year of marriage, the couple welcomed their first child Lawson Walton. As of now, Luke and Ladd are parents to two children, but the name of the latter one is not still revealed in the media. Given that the heights of their father (6’8″) and mother (6’1″), the boys are surely going to be tall.

Enough about her married life, but what about Luke Walton’s wife’s career. What were/are her achievements? How has her marriage with Luke shaped her career? Continue reading this article to get the answers.

As aforementioned, Ladd is a former international volleyball player, but getting married to a more famous sportsperson brought her career under the spotlight. She is more popular for being the wife of Luke Walton than for being an international player. Talking about her career journey, she started making a name for herself during her high school times. She set records after records. In 2001, she was titled as the Gatorade National School Volleyball Player. Not only that, but she was also featured as the Arizona 5A South MVP. Ladd also competed on the USA Junior National Team in 2001.

This doesn’t just end there; Luke’s beau Ladd also played volleyball for the University of Arizona. She set records as a freshman with 124 blocks. She made it to the Pac-10 All-Freshman team. During the 2004 season, she averaged 2.5 kills and 0.98 blocks per game. Well, Bre had made quite a name for herself, but now she is taking care of her family. Furthermore, many sites suggest that Bre Ladd’s net worth is to be in the millions.

During her lifetime, Bre has been a supportive wife, wonderful mother; but let’s not forget she had also been a great volleyball player. This 36 years old has excelled in almost all of the things that she’d got her hands into. We wish her the best of luck in her future endeavors.