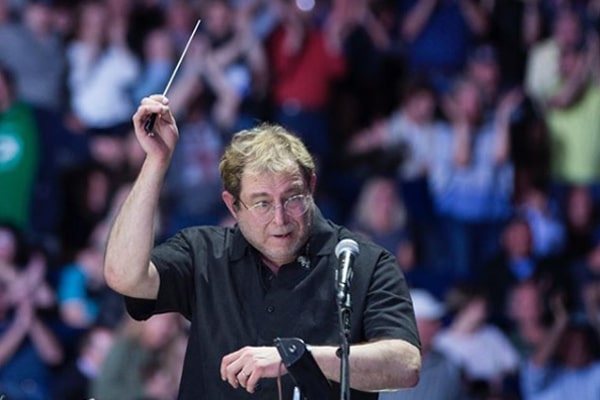 Mackenzie Phillips is an American actress known for her work in American Graffiti, One Day at a Time, So Weird, etc. She is an accomplished actress who started her journey in 1972 and has made remarkable contributions to the entertainment world.

Unlike Phillips’ progressive career, her private life is unsettled and private. Before Levenson, she was married twice. Although her previous marriages were a failure, her marriage with Keith Levenson did last for some time. Here, we will be talking about Phillips’ ex-husband, Keith Levenson.

Keith Levenson is a music director, arranger known for his work on Great Streets, British Rock Symphony, and The Wizard of Oz in Concert: Dreams Come True.

Mackenzie Phillips’ ex-husband, Keith Levenson, is a gem and knows every aspect of the art and the business of music. His career has moved swiftly from Broadway’s Annie to Meatloaf, from London Symphony Orchestra to The Who. Likewise, he has conducted arrangements for KISS, Alice Cooper, Peter Frampton, Nigel Kennedy, and many others.

Despite the success, Keith seems to be grounded personnel and enjoys his privacy. In 20118, he conducted a successful tour of the rock opera ‘Tommy’, across States. The tour resulted in an album, ‘Tommy Orchestral’ produced by Keith and Roger Daltrey. The album was a huge success as well.

Furthermore, Phillips’ ex-spouse, Levenson, has conducted the musicals ‘Annie’ with Jason Robert Brown’s ‘The Bridges of Madison County,’ ‘Peter and Pan’ with Cathy Rigby, and several others. He is a phenomenal music director who has taken the podium conducting 50 piece orchestra and an eight-piece band for icons The Who is on their 2020 tour.

Is Rich In Experiences

Success approaches when one buries themselves into hard work. Such is the success story of Mackenzie Phillips’ ex-husband, Keith Levenson. The victorious music director did not see the peak overnight but worked hard throughout his initial days.

Levenson’s LinkedIn profile is proof that he is the richest when it comes to work experiences and is a genius regarding work ethics. He is a skilled entrepreneur and conductor of The Who.

A post shared by @KeithLevensonMusic (@keithlevensonmusic) on May 7, 2020 at 3:14pm PDT

Levenson started his independent business of music and technology in 2007. Previous to his own business, he worked as music director/orchestrator for Annie The Musical for more than two years from August 2014 to May 2017.

Thus, Columbia University graduate, Keith Levenson, came a long way before writing his name in silver as a successful music director, and conductor in the present days.

Was Married To Actress Mackenzie Phillips

The incredible music director, Keith, was married to American Graffiti actress Mackenzie Phillips in 2005. It is not known how the couple met and how long they dated before sharing their vows in July 2005.

Interestingly, it looks like the couple had a very brief married life since Phillips’ ex-husband’s, Levenson’s Instagram talks otherwise. Although their marriage made headlines, their parting seems to be very down-played.

Whatever the case could be, Mackenzie Phillips and Keith Levenson seem to have parted ways after a few years of conjugal. However, Keith Levenson’s IMDb quotes him as the step-father of Phillips’ son, Shane Barakan, from her previous marriage with Michael Barakan.

Although Keith and Mackenzie’s separation managed to escape the media attention, Keith and his wife, Betsy, are open about their relationship.

According to Levenson’s wife, Betsy Kelly Wilkowski, the pair walked down the aisle in 2007. Therefore, it is pretty reasonable to assume that Keith and Phillips separated briefly after their marriage.

Anyway, moving on, Keith Levenson’s wife, Betsy, is a graphic designer and has been with Keith throughout his journey. Levenson’s partner is the founder and creative director of KELLYdesigns, LLC. Kelly Wilkowski serves as production and management for print and digital for her company.

The successful couple seems to be in love and tends to share a similar interest in entrepreneurship. The couple is parents to Wilkowski’s daughter, Kyra Wilkowski. She was also present at their wedding,

Mackenzie Phillips’ ex-husband, Keith, is a private person. Although he is out and involved in several tours, he has maintained his privacy. There is not much about the creative music director; he seems to be calm and exceptionally professional.

Let’s hope we get to peek in more about Keith Levenson in the future and hear more about his good works.