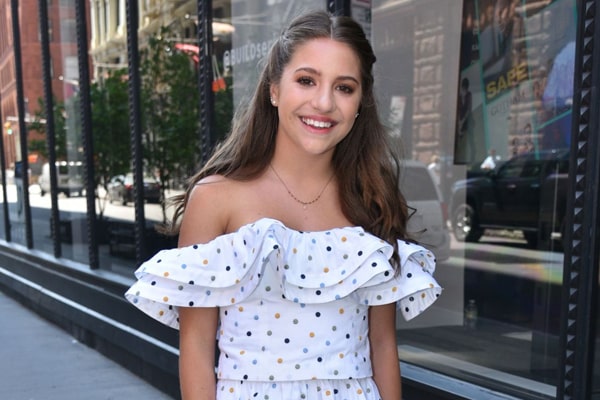 Mackenzie Ziegler grew up beautifully and has been learning from every passing relationships. Image Source: Getty Images.

Dance Mom star, Mackenzie Ziegler, grew up right in front of the world’s eyes. She blossomed into a beautiful and talented woman who is banging on the entertainment world. Along with her colossal success at a young age, she has also fallen in love.

Although it seems like Ziegler is young, beautiful, and successful, she is still very young to be in a committed relationship, or at least that’s what we think. However, she has matured quite a bit and can handle her relationship problems wisely. She has proven her competency in recent days. Therefore, without further ado, let find out who is Mackenzie Ziegler’s boyfriend, and dig in her past relationships.

Their love was young and fiery. Although Mackenzie and Isaak’s relationship started mostly in the summer, they were very much into one another and showed off their cuddly pictures via Instagram. The couple also appeared on one another’s YouTube channel. They even spent holidays like Halloween and Thanksgiving together.

Things were good until Mackenzie Ziegler’s boyfriend, Isaak Presley’s cheating rumors began circulating in March 2020. However, Mackenzie blew clarified that she was with him all the time, and they would call when they weren’t together. Thus, there were no chances of his infidelity. Furthermore, the Dance Mom star, Ziegler, told her fans not to hate her boyfriend for something that did not happen.

Despite dismissing the rumors, it looks like Mackenzie Ziegler and Isaak Presly seem to have called it quits on their relationship. Rumors were slowly circulating, and therefore, Mackenzie addressed it on her Instagram Live to clarify the situation.

In the video, she cried as she revealed that the pair is no more together. Although she seems calm and considerate towards her ex-boyfriend, she tells the fans that she hopes to be together in the future, but for now, they have to take leave as they were not in good mental state.

Let’s hope everything goes well for the young hearts and heal soon.

Maddie Ziegler‘s sister, Mackenzie Ziegler, was previously linked with the Canadian singer, Johnny Orlando. The speculated pair were touring and were involved in multiple projects back in 2017. While the rumors began, Mackenzie was 13, and Orlando was 14 at that time.

Mackenzie even appeared as Orlando’s love interest for his music video “The Most” and ‘Everything.’ Their other projects include songs like “Day & Night,” and a cover of The Chainsmokers’ song, ‘Closer.’

if you couldn’t tell, @kenzieziegler loves recording with me pic.twitter.com/PI6MiAiDlQ

Fans were crazy about the ship and even called the potential couple “Jenzie.” But, to their fans’ dismay, they never dated. According to ET Canada, Ziegler’s rumored boyfriend, Orlando, told that it’s kind of funny when people screenshot and post it captioning, “The way he looks at her.” Mackenzie added that it’s weird because they ‘ship’ them with anyone they hang out with.

Although Mackenzie and Orlando are not a real couple, their friendship is undeniable.

Mackenzie Ziegler’s ex-boyfriend, Ashton Arbab, is an American Actor from Los Angeles known for his role as Dev Cerci at ABC’s General Hospital. He and Kenzie dated very briefly before splitting in a mess and creating a lot of beef.

Ashton was also rumored to have cheated on aspiring singer and actress, Mackenzie. Ashton Arbab accepted that the couple dated for a while in 2018 and had broken up. He also clarified that he never cheated on Ziegler and that he loves her very much. Furthermore, he concluded saying that they were still good friends and were in touch.

However, the cheating rumors re-surfaced when Mackenzie Ziegler’s song, ‘Hot’ as she presumably called her ex-partner, Ashton, a lier. The song created a lot of buzz, but it went down eventually.

On the list of Mackenzie Ziegler’s boyfriend, she seemed to have dated two people seriously, and other involved were alleged. Among them includes Hayden Summerall. The pair were rumored to be together in 2018. However, their relationship was not confirmed.