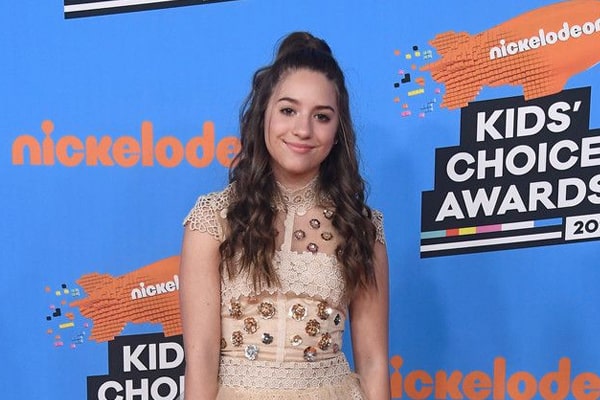 You might remember the youngest member of Dance Moms, Mackenzie Ziegler. The young girl has grown up to become a beautiful, talented young woman. The American actress, singer, and model, Mackenzie Ziegler’s net worth, has escalated to $3 million as of now. She exited the show, Dance Moms, and proved herself as an accomplished actor and has released albums and collaborated with numerous brands. Born on June 4, 2004, she has appeared on other television programs including Nicky, Ricky, Dicky & Dawn. Similarly, she has appeared in the high school drama series Total Eclipses.

All the endeavors have led to an increment to Mackenzie Ziegler‘s net worth more than her sister, dancer, and actress, Maddie Ziegler. Let’s get to know more about Ziegler’s earnings from her career in the entertainment industry,

Mackenzie Ziegler’s Net Worth And Earnings

As stated above, Mackenzie Ziegler’s net worth is estimated to be $3 million. As of now, she is making money on her own via more artistic endeavors than before. As of 2019, Mackenzie signed a record contract with Sony Entertainment that came with a $175,000 advance. Besides, she will also have 20% of all royalties in all formats and earns $9k, $12k, and $15k in her first three years. Likewise, she also gets a $300,00 recording budget.

Mackenzie Ziegler’s first television appearance was on the reality dance show, Dance Moms, with her mother, Melissa Gisoni, and sister Madison Ziegler. She left the show after six seasons to pursue other projects. Although Ziegler’s salary from Dance Mom is unsure, she must have amassed a huge portion at a very young age. Furthermore, she also appeared on the Ultimate Dance Competition, which excited her fame and earnings altogether. Following the success, the sister duo; Maddie, and Mackenzie did a dance workshop tour of Australia in January 2017.

According to TMZ, Ziegler’s salary varied from every episode. TMZ reported that she would bag $130K by the end of the show.

Along with her dance shows, Mackenzie Ziegler dropped her debut studio-album, Mack Z in 2014. The album was a big success and peaked at #1 on the iTunes pop charts while the album’s lead single, ‘Girl Party,’ reached #1 on the iTunes pop chart, which crossed 70 million views on YouTube. Furthermore, she released her second album titled Phases in November 2018. The album is filling Mackenzie Ziegler’s pocket well.

Mackenzie Ziegler’s Income as An Actress

Besides appearing on dancing shows, Maddie Ziegler’s sister, Mackenzie, also proved herself in the acting world. According to her IMDb, she has more than 20 credits as an actress and credits as a producer. Some of her credits include Total Eclipses, Holiday Spectacular, Nicky, Ricky, Dicky & Dawn, etc.

Mackenzie has voiced Lily in Ice Princess Lily. Her television appearances and voicing have earned her name and money at the same time, allowing her to enjoy a comfortable lifestyle.

Mackenzie’s Earnings As An Author

Besides being an actress, singer-songwriter, Mackenzie has stretched her resume as an author. She published her self help book called Kenzie’s Rules for Life: How to be Happy, Healthy, and Dance to Your Own Beat in May 2018. The book is a collection of inspirational lessons of life. The book costs $11.35 in amazon.

Likewise, the Publishers Weekly listed Mackenzie Ziegler’s book #7 best-seller for juvenile non-fiction category. Thus, this shows that the talented Ziegler’s net worth is vast and is aided by her multi-faceted career.

Ziegler’s Income From Her Merchandise

If you thought that’s the end, well hold on to your seat because the 15-year-old teen has more going on. Mackenzie Ziegler’s net worth proliferate every minute with her take merchandise. She released the dance-inspired clothing line called ‘Mackenzie Ziegler for Justice Active’ in collaboration with Retailer Justice. The collection had activewear, including cropped hoodies, tank tops, leggings, etc. Collection with splatter paint, graffiti, sequins’ price ranged from $5.90 to $29.9.

Furthermore, Mackenzie launched her cosmetic line called ‘Love, Kenzie’ in 2018. In an interview with Teen Vogue, the soon to be makeup mogul revealed that the makeup is targeted for the people of her age. Thus, along with her growing popularity and collaborations, Mackenzie Ziegler’s net worth accelerated rapidly.

Apart from merch and movies, Mackenzie has a robust media presence. She garners 13.9 million followers on Instagram and cherishes 3.53 million subscribers on her YouTube channel. Therefore, she makes a handsome sum from sponsorship and endorsements. According to Social Blade, Mackenzie Ziegler’s income from YouTube is between $20.9K – $335K per year. At a very young age, Mackenzie has made a considerable name for herself and not to mention her hefty earnings.

Although Mackenzie Ziegler’s collab with Disney Dance Upon a Dream has been canceled because of Nobel COVID-19, she will bounce back swiftly bagging millions in her name. As for Mackenzie Ziegler’s house, she lives in LA with her parents as she is still a teen. Regardless, she has done a bunch of room tours on her YouTube channel.

Let’s hope Mackenzie Ziegler’s net worth continues to grow along with her career and her big personality.