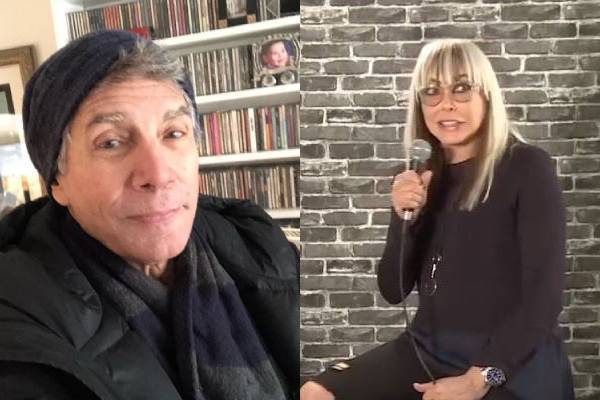 Mark Goodman is a television personality, radio DJ, and actor hailing from Philadelphia, Pennsylvania. He is known for being the original five Video Jockeys (VJs) on MTV, along with Martha Quinn, J.J. Jackson, Nina Blackwood, and Alan Hunter. His professional career has helped him gain immense fame and fortune in his career.

Likewise, Mark’s personal life has also pushed him into the limelight. The radio DJ has been married twice in his life. And because of his fame, fans want to know all about both his wives and personal life. Thus, in this article, let’s know in detail about Mark Goodman’s ex-wife Carol Miller, and know why their marital life came to an end.

Marital Life Of Less Than A Decade

One of the original five VJs on MTV, Mark Goodman, has been married twice. His first wife is Carol Miller, with whom his marriage lasted for less than a decade.

The couple exchanged vows in 1982. However, there is no information about the pair’s first meeting and how long they were dating before walking down the aisle.

As mentioned earlier, Carol and Mark’s marriage could not last for even a decade. Six years after tying the knot, in 1988, their marital life came to an end. It has been reported that the former couple ended their marriage after Mark Goodman’s ex-spouse discovered that he had been using their shared funds to pay for another woman’s apartment while they were still married.

It must have been hard for Carol after they split. But with time, the ex-pair seems to have moved on in their respective lives.

Mark Goodman’s Ex-wife Too Is A DJ

Mark Goodman made a good name for himself as one of the five original five video jockeys. The television personality has gained significant fame and fortune to his name. Mark Goodman’s former wife is also involved in the same profession.

Carol is a disc jockey and radio personality who has been making a presence on rock radio stations since 1973 in the New York City area. While pursuing her undergraduate degree at the University of Pennsylvania, she began her broadcasting career.

Mark Goodman’s ex-wife, Carol’s professional career began in 1971 when she worked at the progressive rock station WMMR in Philadelphia. In 1973, she made her New York radio debut at WNEW-FM where she worked for a year and joined WQIV-FM in 1974. The following year, Miller joined WPLJ, where she worked until 1983.

In 1983, Carol returned to WNEW-FM and worked there until May 2021. She currently appears on several radio channels like WAXQ, Sirius XM’s Deep Tracks, Classic Rewind, etc. Well, Miller must be doing great in her career.

Has Written An Autobiography

Apart from working as a DJ, Mark Goodman’s ex-wife, Carol, has been engaged in the writing profession. She wrote an autobiography Up All Night: My Life and Times in Rock Radio. In the book, she has talked about her career as a disc jockey.

Carol has talked about her rise to success in the male-dominated music industry and her personal and close dealings with famous personalities like Bruce Springsteen, Sir Paul McCartney, and Steven Tyler. She has also revealed her marital life with Mark Goodman and the impact of their divorce on their life.

Where Is Carol Now?

Mark Goodman’s ex-wife Carol Miller has gained significant fame and fortune to her name. But even after being in the spotlight for many years now, she prefers to keep her personal life private.

Miller currently resides on the Upper West Side with her husband, Paul Logus. The couple has been married since 1985. Carol Miller’s husband is a music producer/engineer. However, it is not known when the couple met, and information about their dating history has not been revealed yet.

Moreover, as per Huffpost, Carol had to struggle with two types of cancer. In 1974, a huge lump in her breast was discovered. She went through a relentless chain of devastating diagnoses, multiple surgeries, medical mishaps, and excruciating treatments.

Similarly, in the 2010s, she was again diagnosed with grade three uterine cancer. She must be going through a series of treatments in order to cure her cancer.

Nonetheless, she and her husband must be living a wonderful life. It is not known if they have any kids.

Let’s hope she is healthy and well now and we wish her a great future ahead.