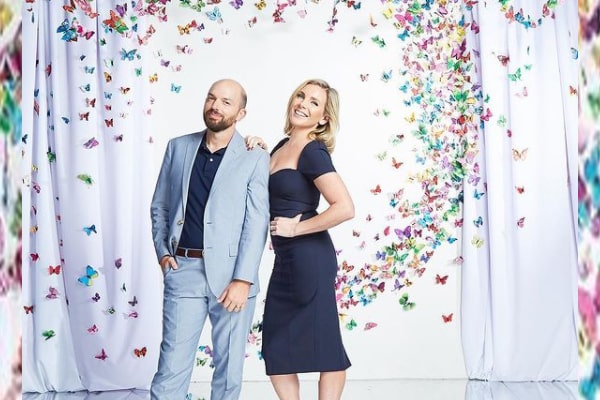 June Diane Raphael And Paul Scheer have been together since 2004. Image Source: June's Instagram.

Paul Scheer is a talented actor, writer, director, producer, and our very own podcaster. The gap between his teeth is honestly filled with his talents and ambitions, which he has pursued since the late 90s. Furthermore, Paul is best known for his roles in NTSF:SD:SUV::, The League, Human Giant, and many more.

Besides comedy and his phenomenal works, Paul Scheer is also famous for his relationship with fellow actress June Diane Raphael. The pair has mesmerized the world with their privacy and competencies. Well, their relationship dynamics have also bedazzled many of his fans. Therefore, let’s get started with when, how, and where the Scheer couple’s journey began.

Also, you might as well learn why healthy roasts and jokes are essential in a relationship. So behold, June Diane Raphael and Paul Scheer, everybody.

If there is any chance a woman can get hold of a combination of talent, comedy, and love, it’s a gazillion dollars lottery. And Paul Scheer’s wife, June Diane Raphael, has won the lottery, and vice versa. It is no secret that the pair’s fate intertwined in 2004 when Paul Scheer thought his to-be wife, June, utterly ignored him. Manhattan Upright Citizens Brigade Theatre’s artistic director brought Scheer to offer suggestions to improve Raphael and Casey Wilson‘s show. But Paul recalls his sweetheart completely ignored him.

Contrasting Paul’s memory, June revealed that she had no recollection of such incident. She further insisted on taking him out to lunch to thank him for his assistance, but he ordered only water.

Furthermore, the Scheer-Raphael pair also confirmed that they were dating other people at the time, which slowed down their courtship. However, they continued to work together, and Scheer further reminisced of having uncertain dates. Things went pretty slow for the dynamic duo, but on a warm day in January, Paul Scheer’s wife, June Raphael, went in for the kiss, which stirred more confusion in their relationship status.

However, June is a catch, and thus, Paul quickly got his head in the game. With the opening of Hollywood’s Upright Citizens Brigade Theatre, the couple moved to LA. According to LA Weekly, he wasn’t letting go of June, who was already planning to head LA.

Well, Paul and June went on to work on several projects together. Realizing their spectacular chemistry, they tied knots in 2009.

Aforementioned, the Scheer couple started their relationship in 2004, and within a year, they were already sure about one another. Thus, after four years of relationship and working together, Paul and June Scheer exchanged vows on 5 October 2009 at Santa Barbara Museum of Natural History.

The ceremony was intimate and monumental at the same time. Moreover, a Jack Nicholson impersonator was Paul’s best man who made the wedding even special.

We might know the history of June and Paul’s work and their strict work ethic. But when it comes to his personal lives, Paul is a master at keeping it confidential. His social media barely features his private life, but it’s an exception for their anniversary posts.

Even after decades-long of conjugal, they are still thriving and in love. Moreover, Paul Scheer’s spouse, June Raphael, believes that they work quite well together. However, she would never want to talk about a project when they’re out to dine. Fair Enough!

Paul Scheer’s marriage with June Raphael is one of few Hollywood marriages that survived the boredom and maintained the charm.

But, do you imagine Paul Scheer and June Raphael as parents? If you don’t, you could never be more wrong because they are excellent at parenting their boys and a fur kid.

While collecting the facts mentioned above, Paul and June’s relationship came off as the pair were always ‘meant to be.’ Therefore, after an absolute certainty, they welcomed their first son, August Scheer, on 30 April 2014. Moreover, Paul’s wife announced her pregnancy via Instagram in 2014, claiming she woke up in Vegas with a baby bump.

Paul Scheer’s second child, Sam Scheer, was born in August 2016. Both Paul and June agreed on raising their kids away from the spotlight. Moreover, they also appreciate one another’s efforts in parenting. Therefore, the Scheer couple does not only have romantic chemistry but are great parents as well.

As stated earlier, Paul is a secret keeper, but they couldn’t contain their bundle of joys to themselves. Thus, without revealing much of their kids, they announced their pregnancies and their birthdays cunningly.

Well, Paul Scheer and June Raphael are together for over a decade now and share passionate love. They work on several projects together, including co-hosting a podcast, How Did This Get Made? Thus, we certainly will hear more from the beautiful couple in the coming days.