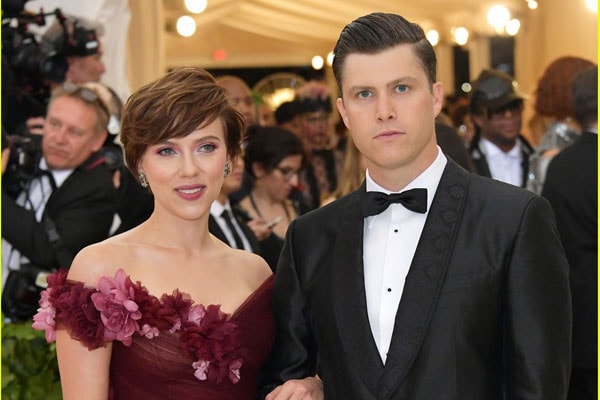 The duo had been sparking rumors to be dating since May 2017 after they were seen kissing at the Saturday Night Live season finale after-party. The enchanting actress was previously married to Ryan Reynolds and Romain Dauriac.

Scarlett Johansson started dating Colin Jost just a few months after she split from her second husband, Romain Dauriac. Fans have been carefully analyzing the rings on Scarlett’s hand since she found the love of her life.

Scarlett Johansson and her beau made their first red carpet appearance at the Avengers: Infinity War world premiere in Los Angeles. The actress and the comedian were enjoying each other’s company in the event. After more than a year the pair made their second annual appearance at the American Museum of Natural History Gala.

The mesmerizing actress and Colin Jost were not shy to show off their love. Lucy actress, Scarlett Johansson and Saturday Night Live star Colin Jost have a  special place in their heart for the annual American Museum of Natural History Gala. As the couple remembers the first time, they made a public appearance together the event is very special for them.

Is Scarlett Johansson Planning To Marry For The Third Time?

The Avengers star shared her views regarding her past marriages with Playboy magazine ( March/April issue 2017). Without holding back, Scarlett Johansson stated that to every gain there is also a loss. The actress further explained by saying that the idea of marriage is beautiful as well as romantic. Scarlett also mentioned that we have to find our own path.

The hot actress claims that marriage is not what it seems rather something completely different. Emphasizing the fact that marriage involves a lot of effort, the actress also said that it’s not necessary to get married if two people love each other.

Scarlett gave examples of her friends who were together for ten years and finally tied the knot. She delivered a strong statement saying that although marriage is a beautiful responsibility, it is still a responsibility. Scarlett Johansson and Colin Jost like keeping their personal life out of the spotlight.

Although  Colin is active in social media, the Under the Skin actress is yet to step in the world of social media. However, fans are happy for Scarlett Johansson and Colin Jost. The wedding bells may be possible in the future as well as nearly impossible, the Ghost In the Shell actress has surely met her long lost soul mate. For now, Scarlett Johansson is focusing on her daughter Rose Dorothy Dauriac and her career.

Who wouldn’t want to date Scarlett Johansson? She is the sex-symbol of Hollywood as well as one of the highest paid actress. Her beauty is undoubtedly enchanting.

After marrying as well as divorced twice, Scarlett Johansson has a new boyfriend, Colin Jost. Here are some facts about Colin Jost-