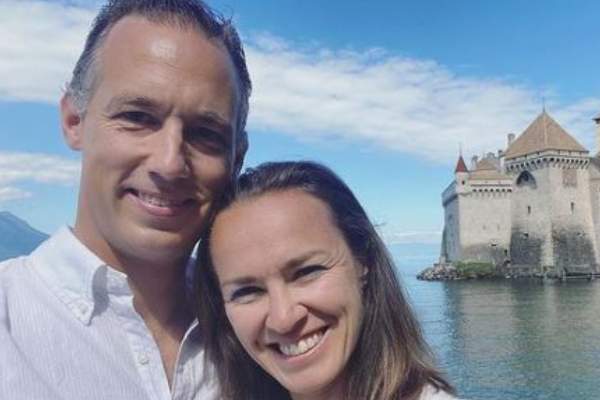 Martina Hingis is a former professional tennis player of Swiss nationality. She is the first player in the country to claim a major title and attain a world No.1 ranking. During the 1990s, she set a series of “youngest-ever” records, including the youngest ever to win a Grand Slam and become world No.1. She retired after the 2017 WTA Finals.

Although Martina is no longer in the tennis arena, her fame is still the same. Talking about her personal affairs, she has been sharing a blissful marital life with Harald Leemann. Fans are curious to know about him, so we present you this article about Martina Hingis’ husband and more insights into their marital life.

Met On The Course Of Games

Martina and Harald are a happily married duo who met during the Swiss Fedcup. Martina Hingis’ spouse was hired there as a team doctor, and the couple fell in love instantly. However, as per some sites, the pair’s love story began at Rio Olympic Games in 2016, where he had accompanied her as a personal supervisor.

Harald Leemann’s wife had played with Timea Bacsinszky in doubles and earned the silver medal. Then, when she was celebrating her retirement at the farewell gala at Dolder Hotel in Zurich, he was next to her. After dating for a year, the lovebirds tied the knot in July 2018. On the other hand, some reports claim they were together for two years before saying their “I do’s.”

The lovely pair exchanged their wedding vows in a private ceremony at the Grand Resort Bad Ragaz in the presence of their family and friends. A total of 140 guests graced their big day. The newlyweds took it to their social media to announce their marriage.

After tying the knot in 2018, the couple decided to extend their family further. As a result, the duo welcomed a child.

In September 2018, the sportswoman announced her pregnancy on her 38th birthday via social media. She tweeted a photo of a pink US Open t-shirt along with a racket and revealed that her 38th birthday would be the last time they celebrate as a couple as they would soon become a family of three.

Thanks for all the birthday wishes! Happy to share that this will be the last time we’ll celebrate as a couple…excited to announce that we will become a family of three! pic.twitter.com/FRrpndFxxH

In March 2019, Harald Leemann’s wife shared a family picture and announced the arrival of their baby girl, Lia Leemann. Several fellow players and fans congratulated her for becoming a new mom. Just like her, Martina Hingis’ husband often shares lovely pictures of their daughter on social media.

As mentioned earlier, the former tennis player and her hubby met during the Swiss Cup when he was hired as a team doctor. With that being said, Martina Hingis’ partner is a former sports doctor.

In March 2002, Martina’s spouse graduated as a Qualified Tennis Coach SPTA from the Swiss Professional Tennis Association (SPTA). Then, from October 2001 to October 2008, he went to the University of Zurich, from where he received a Dr. Med. in Human Medicine. Likewise, in 2021, he attended the University of St. Gallen and earned a degree of CAS in Sport Management.

Since September 2020, Leemann has been studying MSc in Sports Medicine at the Universität für Weiterbildung Krems (Danube University Krems). As per his LinkedIn, he will be graduating in February 2023. Talking about his professional career, the University of Zurich alumnus currently works as a Senior Physician m.b.F in orthopedics/traumatology at Zuger Kantonsspital, where he is also a co-head of sports medicine.

Prior to that, Martina Hingis’ husband served as a Deputy Head of Sports Medicine. From July 2016 to September 2017, Leemann worked at GZO AG Spital Wetzikon. Furthermore, he has also worked at Schulthess Klinik, Solothurner Spitaler AG, and Kantonsspital Graubunden.

Have The Couple Separated?

In September 2022, the Swiss Blick reported that Harald and Martina had separated, and the latter had already moved out of the house with their daughter, Lia. The former player reportedly moved from their home in Zug into an apartment on Lake Zurich.

Harald Leemann’s spouse confirmed that they have split up, have other life plans and goals, and have grown apart. She reportedly talked about maintaining a reasonable relationship in the near future for the sake of their little girl. The duo shares the responsibility for their baby girl’s upbringing and is trying to do everything to make sure she’s okay and are looking for the best solution for her.

However, the duo still follow each other on social media, and their posts of one another are still there. So, what exactly is going on between them remains a mystery. Nonetheless, let’s hope we find out the truth soon.

While this might be the first failed marriage for Martina Hingis’ hubby, it’s the second for her. Before tying the knot with him, she was married to Thibault Hutin from 2010 to 2013.

Nevertheless, we look forward to knowing more about Harald and Martina’s marital life. Hopefully, he is doing well while working in his related field. We wish him good health and prosperous days ahead.