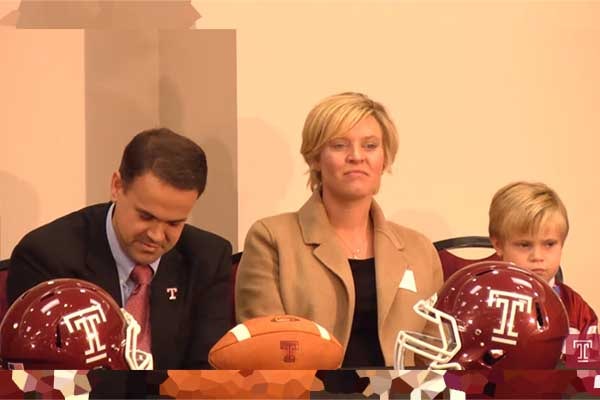 While talking about NFL coaches, one can certainly not miss Matt Rhule. He is the head coach of the NFL team Carolina Panthers and has led the team to develop a strong defense and secure many wins.

The coach has had a successful career with over two decades of experience. Since becoming the Panthers’ head coach, his popularity has only skyrocketed. Likewise, Rhule has also been successful relationship-wise and is a married man.

Matt Rhule’s wife, Julie Rhule, is a dietitian at Temple University. She has been a great support to her husband’s career from the beginning of their relationship. So, let’s learn more about this gorgeous woman’s career and love life in this article.

Lost Her Mother To Cancer

The dietitian was born Julie Nibert to her parents, Donald Nibert and Donna Nibert. She grew up in an educated household in Montoursville, Pennsylvania.

Julie Rhule’s father, Donald, was a professor of forestry at the Pennsylvania College of Technology. He moved his family to Pennsylvania after getting his job at Penn College. Moreover, Rhule also has a brother named John Nibert.

Sadly, Matt Rhule’s late mother-in-law, Donna, passed away after a five-year battle with breast cancer on September 9, 2012. His spouse, Julie, idolized her mom and was very close with her. So, losing her mom impacted her heavily.

The media personality had previously suffered another tragedy. Her younger sister, Cheryl Nibert, was one of the passengers of TWA Flight 800, which exploded over the Atlantic Ocean in July 1996.

Matt And Julie Met During Their College Years

Anyone familiar with the NFL coach will know that he was a linebacker at Penn State. He played collegiate football for all four years and gained many honors. In addition to his football journey, Matt met the love of his life, Julie, in his college years.

Matt Rhule’s wife, Julie, was an undergraduate at Penn State. She had her first encounter with him while working as a waitress at Chili’s restaurant. Furthermore, the Panthers coach was a fry cook and grill guy there. It was one of his summer jobs.

The pair soon developed a connection and went on a couple of dates. However, Matt Rhule’s partner, Julie, wasn’t ready to take things forward due to many things going on in her life. But the former persisted and kept calling until she finally gave in.

The couple married a few years later and has enjoyed marital bliss since. Both parties’ mutual understanding and support might be the reasons behind their happy married life.

Julie Is A Mother Of Three Kids

Matt Rhule’s wife, Julie Rhule, has been in the limelight since the start of their relationship. Her three adorable children have also come under media scrutiny due to Matt’s football fame.

Julie Rhule’s eldest son, Bryant Rhule, was born in 2005 in Asheville. When he was younger, he was a massive fan of Taney Dragons and played for the younger Taney team. In addition, he often bonds with his dad, Matt, over football and once went on a fishing trip with former NFL coach Jimmy Johnson.

Spend 5 minutes with @JimmyJohnson and you realize why he is a @ProFootballHOF member! https://t.co/L0KrrBD2uC

The duo welcomed their second child, Vivienne Rhule, in March 2013. She was a miracle baby for her parents as they thought they couldn’t conceive another child biologically. However, Matt’s daughter, Vivienne, was born prematurely.

Sadly being a celeb kid comes with both pros and cons. While people recognize Rhule children from their father’s job, it might also cause adverse outcomes. For instance, the NFL coach has shared that he can’t bring his son, Bryant, to games due to fans’ hostile reactions.

As mentioned earlier, the blond beauty is a licensed dietitian at Temple University. She is a registered dietitian with Sodexo, serving the university’s students.

Matt Rhule’s spouse, Julie, served in the Temple while he was an assistant offensive line coach for New York Giants. Later he joined his partner as the head coach for the Temple Owls Football Team in 2013.

The dietician stresses moderation and balance in one’s diet. For example, she allows the students to incorporate cupcakes or donuts in their meal at Temple’s Dining Services. In addition, Julie stresses how it’s an individual’s choice to decide on what to eat.

Likewise, the nutritionist takes care of her family’s diet. She is the personal chef of the Rhule family.

Hence, Matt Rhule and his lady love Julie are living a comfortable life together. The latter encouraged him to accept the Panthers head coaching position, which proved a golden opportunity for the NFL coach.

We wish the Rhule family prosperity and happiness ahead.