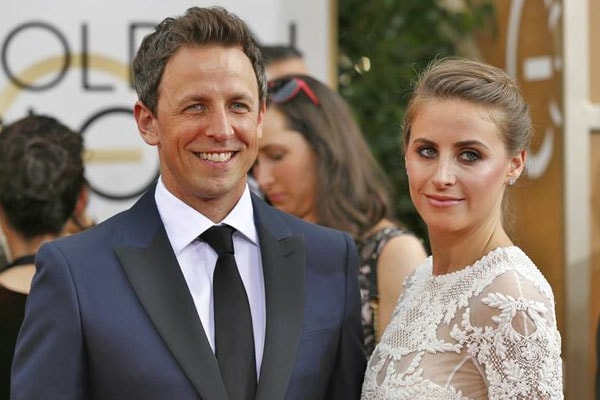 After being in a lovely relationship for over five years, Seth Meyers and Alexi Ashe got engaged in July of 2013 and in the 1st of September, 2013, they finally exchanged vows at Martha’s Vineyard.

Alexi Ashe Met Her Husband, Seth Meyers At A Wedding

It is a funny story about how a lawyer ended up with a funny TV host. Alexi Ashe’s sister worked as a set designer for Saturday Night Live, and when one of the cast members had a marriage, Alexi went there as her sister’s guest where she bumped into Seth. According to Seth Meyers, it was love at first sight for him.

And as stated earlier after dating for five years, from 2008 to 2013, they turned their relationship into a marital affair. Since then it has been five years of marriage, and both Seth Meyers and his wife Alexi Ashe are still going strong. Let’s hope that the love they have got for one another shall never fade.

Alongside being a human rights attorney, Alexi Ashe also works hard on behalf of women around the globe. She does different humanitarian works including causes like stopping human trafficking. Well, the one thing that is common between Seth Myers and his wife Alexi Ashe is that when Meyers draws attention to the hypocrisy of the day, Alexi plays her part in doing something about them.

Alexi Ashe Is A Woman Of Secrecy

Not a lot of people knew that Seth Meyers had been married for over five years because of her private nature. Alexi is not that much active on social media, though her husband often uploads pictures of her alongside him.

Let’s hope that from now on, we shall get to see much more of Alexi Ashe and get to know how much of a beautiful person she is.