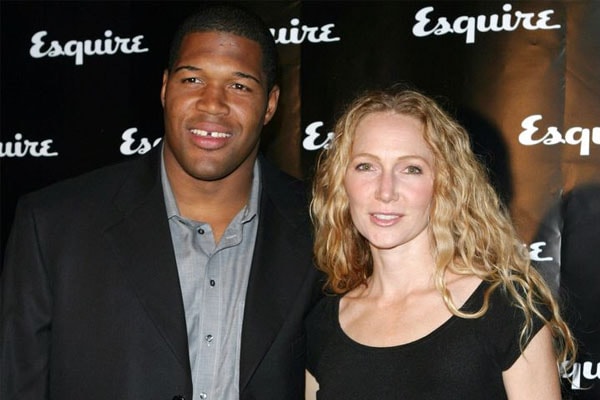 Michael Strahan’s ex-wife Jean Muggli was born on the 20th of November 1965 in North Dakota, USA. Michael and Jean tied their wedding knot back in 1999. However, things didn’t go well between the now exes and the former couple got divorced in 2006. The ex-pair share twin daughters together named Sophia Strahan and Isabella Strahan.

Jean grew up alongside her sister Denise Muggli. However, any details regarding her parents are yet a mystery. Also, she is step-mother to Michael’s children, Tanita Strahan, and Michael Anthony Strahan. Michael had Tanita and Michael Jr. from his previous marriage with Wanda Hutchins.

Other than her ex-husband Michael, there is no information regarding Jean’s past relationship and boyfriends. However, there is quite an astonishing story of the now-divorced couple of their first encounter together. Jean met her ex-husband in a cosmetic store where she worked as a store manager. The exes admitted that it was love at first sight for them.

Obviously, things didn’t go well between the pair after the birth of their twin daughters together. The former couple had a peaceful marriage until March 2005. However, Jean reported that she was physically and mentally abused by her ex-husband and beaten mercilessly. She claimed that the abuse left her with kidney damage. Not only that but the most shocking allegation claimed that the athlete, Michael placed the camera in the bedroom to film Jean’s sister getting undressed.

On the other hand, Michael denied all the allegations. The ugly fight was resolved and the exes got divorced with Jean was granted alimony of $15.3 million and $18K per month for the upbringing of her daughters. However, things seem quite calm now as the former pair claim to be good friends.

Since Jean’s hostile divorce with her ex-husband Michael Strahan, not much has been heard from her. Following her devasted marriage, Jean moved to her birth home, North Dakota. We can assume that she is enjoying a quiet and low key life.

Muggli rarely attends social events and gathering. It is quite obvious that she is avoiding the media limelight and is enjoying her personal space. She hasn’t revealed anything relating her private space out to the media after her divorce. In fact, she has even kept her Instagram handle privately. Looks like, Jean seems to have dedicated all her time raising her twin daughters and the mother and daughters love each other to the moon and back.

Even though her former spouse has moved on to date, nothing is known about the current love life of Jean. Nevertheless, Michael even got engaged after their marriage crashed. Jean even seems to try to build up a good relationship with her ex-husband because of their twin daughters. Michael had even described her as a part of the family and his best friend.