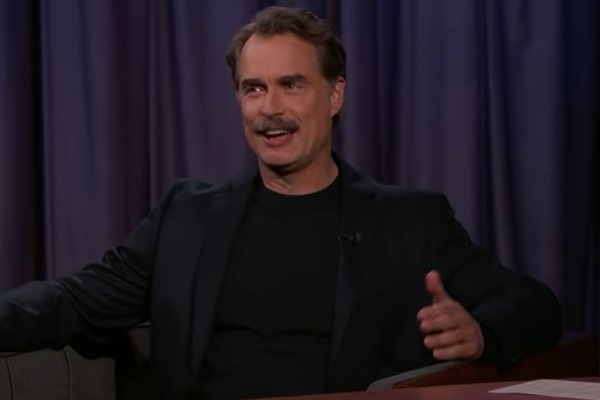 Murray Bartlett is an Australian actor who has starred in several hit series and movies. Some of his notable series include Looking, The Good Wife, and Tales of the City. In addition, Bartlett won the Outstanding Supporting Actor in the 2022 Primetime Emmy Award for his work in the HBO satire comedy series The White Lotus. Moreover, the Sydney native has been active in the film industry since 1987.

The talented actor is openly gay, and there has been a lot of curiosity about his personal life. Thus, in today’s article, let’s get to know Murray Bartlett’s partner in detail.

Came Out As Gay To His Parents

Murray was born in Sydney, Australia. His family moved to Perth when he was four years old. In an interview with The Guardian, The White Lotus star said that he was fortunate and very loved, particularly by his mom. Bartlett said his mother made him feel like he could be whoever he wanted to be. Not only that but coming out as a gay man to her was never an issue. Apparently, Murray Bartlett’s mama had a lot of gay friends.

Meanwhile, the actor said his problems started when he went to acting school and became an adult. He revealed that he was like, why doesn’t everyone love him as his mum does?

Furthermore, while coming out to his mother was easy, coming out to Murray Bartlett’s father was a bit more complex as the latter has religious beliefs that struggle with people being gay. However, the actor added that he knows his dad loves him, and he also loves him. He also said It might be a bit tricky thing to accept other people’s different views of the world and their belief systems without backing down from what the star believes.

While sharing his story, the actor got emotional and couldn’t hold back his tears. He said he didn’t realize that particular moment was painful for him even after all these years.  Above all, what matters the most is if you have accepted yourself or not. Hopefully, Murray is proud of who he is and has accepted himself.

Worked In Many Queer Dramas

Murray has worked on several queer dramas. One of Bartlett’s biggest roles was in 2014 when he was cast in HBO romantic comedy-drama television series Looking. The drama ran for a year, and he played Dom Basaluzzo, one of the three close gay friends living in San Fransisco.

In addition, the actor was on screen partner with Lukas Gage in the American comedy-drama, The White Lotus. Likewise, Andrew Keenan-Bolger was Murray’s partner in Looking. He also portrayed the role of a gay friend in Sexx and the City.

Who Is Murray Bartlett’s Partner?

As per The Guardian, the Looking actor and his lover left New York and moved to Provincetown, Massachusetts, during the pandemic. However, the other identity and details of Murray Bartlett’s partner are a mystery. Regardless, the talented actor must be having a wonderful time with his boyfriend.

Although the Tales of the City actor is active on social media, he refrains himself from sharing any information regarding his love life. As a result, finding out about his dating life has become more challenging. Let’s hope we will hear more about Murray Bartlett’s boyfriend in the coming days.

Nonetheless, Murray Bartlett seems to be dating someone, but the successful actor has not revealed any information about him. Let’s hope the actor reveals the truth soon in the coming days. We wish Murray Bartlett and his loved one a joyful life ahead.