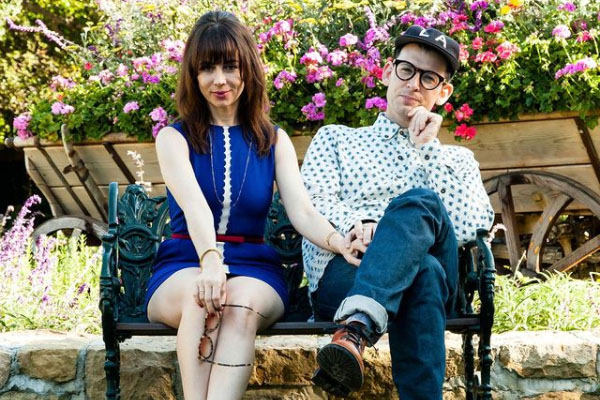 Natasha Leggero and Moshe Kasher are one of the long-lasting couples in the celeb world who are rejoicing their married life without any disputes and public dramas. The celebrity pair, Leggero, and Kasher are together since 2012 and have been in a marital bond since 2015. However, their chemistry is as strong as it was at the beginning of their relationship.

So, without any delay, let’s learn some more about Natasha Leggero’s marriage with her fellow comedian, Moshe Kasher, and many more details regarding their relationship.

Leggero And Kasher In A Marital Relationship Since 2015

The lovely duo, Natasha Leggero, and Moshe Kasher, took their wedding vow on 11 October 2015, after dating for three years. Their wedding was a traditional Jewish ceremony attended by their family members and close friends. Leggero and Kasher’s big day took place at their house in the Silver Lake neighborhood, LA.

While talking to late-night host Conan O’Brien on CONAN some years ago, Natasha Leggero opened up about her engagement with Moshe Kasher. She disclosed that the day Kasher surprisingly did not propose when they were in a restaurant in New Orleans. However, he popped up the question only while walking to the Mississippi River after dinner.

It has been over half a decade since Leggero and Kasher are together as wife and husband. According to Leggero, the main reason behind their long-lasting relationship is their involvement in the same profession. We wish their marriage keeps blooming like it is in the present in the days to come.

The joyful married couple, Natasha Leggero and Moshe Kasher are doting parents to a daughter whose name is still a secret. However, Leggero did not keep the arrival of their little girl in this world private. She declared the birth of her baby girl via her Instagram page on 24 February 2018 and mentioned her little one as her toilet baby.

Both Natasha Leggero and Moshe Kasher are very happy with the presence of their daughter in their life. Though they are still mute concerning their child’s name, the pair often post snaps of their fun time with their girl. Going through the social media handles of Leggero and Kasher, it looks like their only child is fond of camping and going outings with them.

Moreover, she also goes alongside them in some of their comedy tours.

However, Natasha Leggero and Moshe Kasher do not seem to be interested in adding a new member to their family. In 2017, while Leggero appeared on Late Night With Stephen Colbert, she was pregnant with her daughter. That time, in reply to Colbert’s question about her pregnancy, Leggero said that was her first and her last pregnancy as she has bad cravings for drugs.

So, it does not look like Leggero and Kasher have any plans to have another kid. But who knows, their daughter might change their mindset and make them want more kids in the upcoming days.

Do Stand-up Comedies Together

The beautiful pair, Natasha Leggero and Moshe Kasher are touring along together ever since they met and fell for one another. Both have been doing stand-up comedy for over two decades-plus and enjoy making people laugh until they cry with their combined comedy performances.

Though Natasha Leggero and Moshe Kasher spent a proper honeymoon at their favorite place, after their nuptials, they decided to stretch their honeymoon longer by bringing the “The Honeymoon Tour” show. They spent 2016 and 2017 performing stand-up shows and providing humorous relationship advice nationwide via the comedy tour.

2020 sucked for couples, especially wives,we had to deal with our husbands Pirates of the Caribbean hair. We made a Refurb Registry on @ebay, a list of Certified Refurbished products to get us back to normal. Build yours&eBay could gift it to you! #ebaypartner #ebayrefurbregistry pic.twitter.com/eyQs4OJ4DU

Moreover, the married pair’s show ‘The Honeymoon Standup Special‘ was also premiered on Netflix in 2018. Currently, both Leggero and Kasher run the podcast ‘Endless Honeymoon Podcast,’ which came from their 2018 Netflix special.

Doing stand-up comedies together is proving to be an opportunity for Natasha Leggero and her man, Moshe Kasher, to bond as a couple. On top of that, it also helps both of them to avoid feelings of isolation that many comedians worldwide experience.

Let’s hope their togetherness as comic spouse last till eternity.