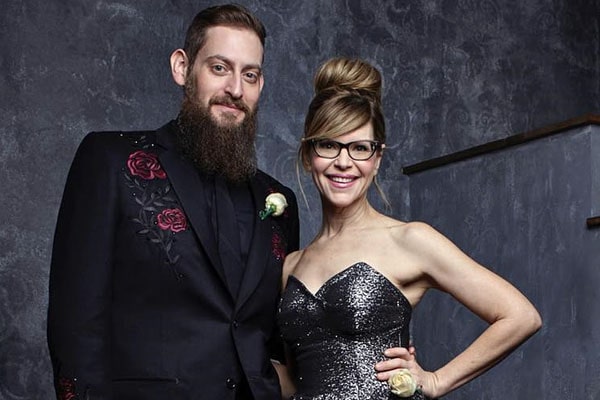 It is common knowledge that American singer, and musician, Lisa Loeb has reached the very heights of musical stardom. However, many might be surprised to know that her husband, Roey Hershkovitz is also in the music industry for more than two decades. The son of Cliffside Park, NJ residents, Debra C. Hershkovitz and Robert Hershkovitz, Roey worked in the music department of several films, and TV shows in the past.

So, what does Lisa Loeb’s husband Roey Hershkovitz do at the moment to support his family? Find the answer here. Also, know about his happy marital relationship with Lisa and their kids together.

Lisa Loeb’s husband, Roey Hershkovitz, is the vice president of Universal Music Group’s Capitol Studios and Digital Studios. Reportedly, he joined UMG in 2019. After landing a gig as VP of UMG, the world leader in music-based entertainment, Hershkovitz got the task to oversee the studio’s tracking, recording, mixing, and mastering operations.

Furthermore, Roey Hershkovitz is also the Capitol Studios’ Covid Officer. He estimates the studios are booking eighty percent of the sessions they normally would. He makes sure all the studio works are carried out efficiently with full safety during the ongoing COVID-19 pandemic.

Starting as an intern in 1999, Hershkovitz joined NBC’s ‘Late Night With Conan O’Brien‘ in May 2000 as music coordinator and field producer. Later, he served as a music production supervisor at NBC’s The Tonight Show from 2009 to 2010. Eventually, Hershkovitz began working as a segment producer and music production supervisor at Conan in October 2010.

Later in 2017, Conan elevated him to its music booker after veteran Jim Pett left for ABC’s ‘Jimmy Kimmel Live!’. The Long Island University, C.W. Post Campus graduate, Hershkovitz served as a music booker in Conan till 2018 and joined UMG.

During his tenure in Conan, Hershkovitz advocated new and developing talent to late-night viewers. Also, he produced high-ranked musicians like Pearl Jam, U2, Bon Jovi, Drake, Coldplay, and many more. Moreover, Hershkovitz also gets the credit for booking the first-ever U.S. late-night TV appearance of Luis Fonsi‘s ‘Despacito.’

Besides, Roey Hershkovitz served as a co-producer of multiple episodes of one of the top-tier TV shows ‘The Office.’ He was also the voice behind Hasidic Pedestrian/ Subway Announcer of the action-comedy video game ‘Grand Theft Auto IV.‘ However, in the present, the beloved husband of Lisa Loeb, Roey, is a full-time member of staff at UMG’s Digital Studios.

Lisa Loeb and her better half, Roey Hershkovitz, met during a business meeting in New York City in 2006. Hershkovitz was looking for a host for a food show he was developing while Loeb was there as a guest. The pair developed a special bond with time and eventually got engaged in November 2008, followed by their wedding in 2009.

One of the exemplary couples of the entertainment world, Lisa and Roey took their wedding vows in January 2009 before 275 guests at a restaurant in NYC. People magazine notes that Roey Hershkovitz’s bride, Lisa Loeb was in a strapless pink wedding gown by Amsale Blue Label while he looked stunning in a suit by Paul Smith. The best part of their big day was that the kind couple donated flowers from their marriage to the Flowerpower Foundation.

Both Lisa Loeb and Roey Hershkovitz appreciate their support, love, and care for one another. It has been over a decade since the duo is together as a husband and wife, but their love and respect for each other is still as fresh as new. We hope their marriage continues to get stronger with time.

Roey is a devoted dad to two children with his long-time wifey, Lisa Loeb. Together, the pair welcomed their first child, daughter Lyla Rose Loeb Hershkovitz, the same year they walk the aisle, on 29 November 2009. Similarly, Roey Hershkovitz’s wife, gave birth to their son Emet Kuli Loeb Hershkovitz, on 15 June 2012.

Roey Hershkovitz, and Lisa Loeb, are balancing their career and their kids very well. Being an integral member of the music industry, they are raising their kids also in a musical background. They often use music to empower and teach new things to their little ones.

Nevertheless, Ryan Hershkovitz is finding success in both his professional and personal life. We expect to see him gaining more fame and fortune in his career in the days to come.