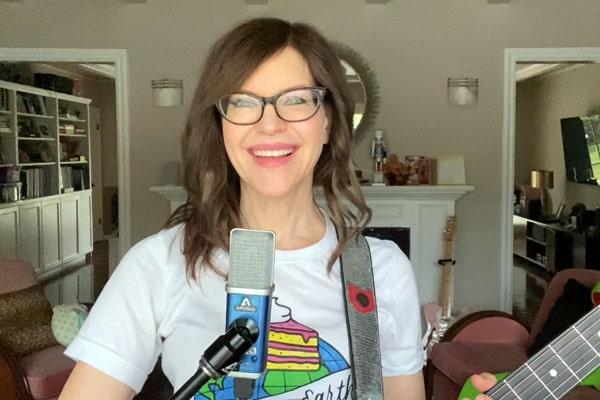 Lisa Loeb is a successful American singer and musician who is winning the hearts of millions of music fans around the globe. Her career in the musical field started after she formed a band named Liz and Lisa, with musician Elizabeth Mitchell in the mid-1980s. Ever since then, Loeb is actively involved in the industry without any breaks. Besides, she is also famous for her appearances in several films, TV shows, and voice-over works.

Also, get to know her other earning sources besides her career as a singer and actress.

Lisa Loeb’s Earning As A Singer-Songwriter

Celebrity Net Worth notes that Lisa Loeb’s net worth is estimated to be $10 million. However, it might have slightly inflated with her increasing music projects and musical tours. From her total net value, the majority of the money comes from her career as a musician and singer.

Loeb, who rose to fame after the release of her number one hit ‘ Stay (I missed You)‘ from the movie ‘Reality Bites,’ has released numerous singles and albums to date. Some of her top-ranked studio albums include two back-to-back albums, Tails and Firecracker, that were certified gold. Besides releasing albums for adults, Loeb also has put out around half a dozen albums with songs for children.

Some of Lisa Loeb’s hit studio and children’s albums with their prices are below.

While the singing diva, Lisa Loeb, mainly makes money from her career as a music artist, she also adds some dollars to her bank balance by appearing in several TV shows and movies. Moreover, Loeb lends her voice and songs in animated films as well. Though she seems to be focused on her musical career lately, she appeared in many TV series in the past.

Lisa Loeb’s first TV appearance as an actress was in one of the segments of the 1989 low-budget comedy horror film Tabloid. Later, she starred in the Food Network TV series ‘Dweezil & Lisa,’ which showed her and her ex-boyfriend, Dweezil Zappa, touring around and tasting diverse dishes.

Some other TV series appeared by Lisa Loeb include Number 1 Single, The Nanny, Gossip Girl, and many more.

Similarly, Loeb also appeared in horror films like ‘House on Haunted Hill‘ and ‘Fright Night.’ Reportedly, House of Haunted Hill‘s box office collection was $42,593,455 from its worldwide release. Similarly, Fright Night made $41,002,607 after its release. So, Loeb also might have got a hefty paycheque for her role in those movies.

Moreover, Loeb lent her voice to animated films such as Spider-Man: The New Animated Series, Shorty McShorts’ Shorts, and Jake and the Never Land Pirates. Also, she appeared as herself and performed the song ‘Stay (I Missed You)‘ in the TV series ‘Fuller House.’

According to sources, one of the regular cast members of Fuller House, Jodie Sweetin, got $590 per hour from the series in 2017. So, Loeb also might have received a similar payment from Netflix Inc. for her guest appearance, which added up to her rising bankroll.

Earning From Other Sources

Apart from making millions from the American entertainment industry, Lisa Loeb brings in several dollars from different other sources. The all-rounder performer, Loeb is also a blogger and an entrepreneur.

As a blogger, Lisa Loeb occasionally contributes blogs for several prestigious magazines. On top of that, she also contributed to Carrie Borzillo-Vrenna‘s book Cherry Bomb. Loeb advised the readers on how to become the perfect hostess through the book.

Similarly, a regular specs user, Lisa Loeb, owns an eyewear collection, which she launched back in 2010. Lisa Loeb’s eyewear collection has frames for every look and occasion, uniting the gap between the workplace and everyday chic. Most of her collections are right on trend, with their cat-eye and retro shapes inspired by the 60s and 70s.

The ongoing prices of Lisa Loeb’s eyewear collections are:

Besides, some portion of Lisa Loeb’s net worth credit goes to her official YouTube page, which has 59.9K subscribers at the moment. As per Social Blade, Loeb’s YouTube channel currently draws an estimated revenue between $257 – $4.1K monthly and $3.1K – $49.4K yearly.

The Grammy-award-winning singer Lisa Loeb enjoys and feels pride in helping the people in need, especially children. So, the Dallas native Loeb founded her own non-profit, The Camp Lisa Foundation, in 2008. She has partnered with Summer Camp Opportunities Promote Education, Inc. (SCOPE) with a mission to help underprivileged kids attend summer camp.

I started the Camp Lisa Foundation to make it possible for kids, who wouldn’t normally have the opportunity, to go to summer camp. Yes, I’m doing the almost splits up front. Instead of doing the splits, you could give a donation for #GivingTuesday! https://t.co/Sk4bPoBWy3 pic.twitter.com/yaHGiT0WjL

Lisa’s foundation provides funding for many camp scholarships, enabling impoverished kids to attend summer camps. Moreover, as an entrepreneur, she sells a brand of coffee titled ‘Wake Up! Brew,’ which is organic and fair trade, and all its profit goes to her charity, Camp Lisa.

So, Lisa Loeb earns adequate money to support her family, have a luxurious lifestyle, and give away to the needy ones. She might also pay a significant amount in taxes. Also, the owner of a beautiful voice, Loeb might have insured her assets for thousands of dollars.

And, with her rising musical career, it looks like her fortune is also increasing simultaneously. Let’s hope to see her engaged in more business ventures in the upcoming days.