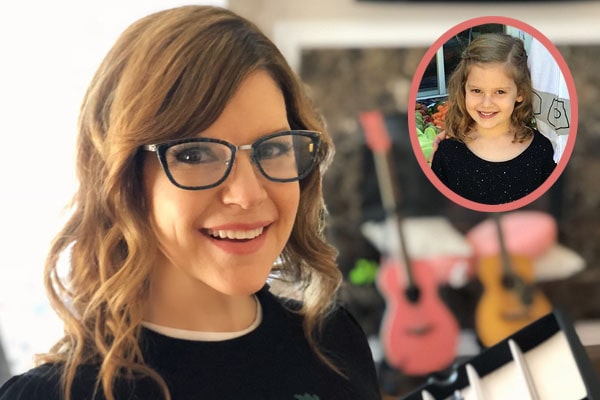 Lyla Rose Loeb Hershkovitz is the daughter of the well-known American singer-songwriter Lisa Loeb and her long-time husband, Roey Hershkovitz. Just like her mom, Lyla’s dad, Roey also had a long-standing music career. He has been engaged in the entertainment industry for more than two decades. The devoted father of Lyla, Roey Hershkovitz, was the co-producer of the popular TV series ‘The Office.’

Loeb is achieving more success in the music industry with time, so, her little girl, Lyla Rose, is now under media scrutiny. Today, be familiar with some interesting facts about Lisa Loeb’s daughter, Lyla Rose Loeb Hershkovitz, and also know how she is growing as a child of a music diva.

Lyla Rose is the first child of the married pair, Lisa Loeb and Roey Hershkovitz. She arrived healthy on 29 November 2009 at Cedars-Sinai Medical Center, LA. Beautiful Lyla got her middle name ‘Rose’ after her mom, Lisa’s great-grandmother.

Furthermore, Lisa Loeb’s daughter, Lyla Rose, was blessed with a cute younger brother, Emet Kuli Loeb Hershkovitz, on 15 June 2012. She enjoys playing with her little brother and loves going on outings with him during her parents’ free time. Moreover, the brother-sister duo also sometimes gets snapped by the paparazzi when they are out with their mom and dad.

Lyla Rose Loeb Hershkovitz’s parents are overly concerned about her privacy. As a result, they rarely share her information and photos on their social media handles. And even if they do post some family pictures, they make sure her face is hidden. Regardless of that, we hope Lyla is enjoying her childhood to her best, away from media hindrances.

Lisa Loeb’s Daughter Is Fond Of Her Songs

Lisa Loeb’s kid, Lyla Rose, is a great fan of her mother’s songs. So, the eleven years old is already getting to know her songstress mom’s music. While talking to the US Weekly, Lyla’s momma, Lisa, said that Lyla and her brother, Emet, get to hear all her songs and the mixes. She added that she listens to her upcoming songs with them in the car to make sure the song order is good.

So, Lyla and her younger sibling, Emet, know their mother’s music very well.

Besides, Lyla Rose often gets some chance to take advantage of growing up in a music family. She has done a tiny bit of singing and appearing in her mom’s music videos. Lisa’s 2016 song ‘Twinkle Twinkle Little Star‘ features Lyla along with a group of other kids doing some arts and crafts.

We hope we will soon see her singing on stage together with her renowned mom, Lisa Loeb.

Lisa Is Balancing Her Career And Her Kids Very Well

Lyla Rose Loeb Hershkovitz’s mother, Lisa Loeb, balances her music career and her life with two kids very well. And, Hershkovitz’s father, Roey Hershkovitz, is also the greatest support. Both of them always try and prioritize their kids as much as they can. On top of that, Lyla’s mom and dad feel happy that they are raising her and her brother in a musical household.

Lisa Loeb and Roey Hershkovitz use music to encourage Lyla to enjoy life and move. They apply music to tantrum areas, such as transitioning from one activity to the next so that it distracts Lyla and she can move on.

Moreover, like most working parents worldwide, Lisa leaves Lyla and her son, Emet, with their grandparents or nanny while she is busy with her musical tours. According to Loeb, it keeps them in their regular routines. Moreover, Lisa feels leaving her daughter with family members has helped Lyla become independent.

Hence, Lyla Rose Loeb Hershkovitz is enjoying her childhood years full of love, care, and lots of learnings from her close ones. We hope Lisa Loeb’s daughter will also grow up to be as beautiful and strong as her mom.

The girl’s name, Lyla, is a variant of the Hebrew origin name Lila, which means night, beauty, or dark beauty.