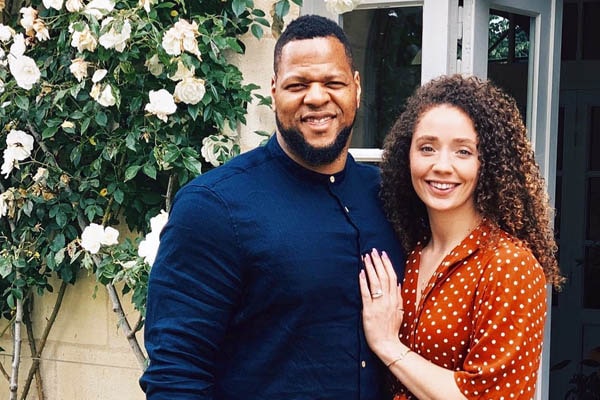 Ndamukong Suh is one of the highest-earning defensive players in the NFL history. In 2015, Forbes magazine listed him as the highest-paid defensive player in NFL history after the Miami Dolphins signed him to a six-year $114.3 million worth of contract. However, he played for three seasons only with the Dolphins and joined Los Angeles Rams. Before signing to the Miami Dolphins, Suh spent five years playing for the Detroit Lions. At the moment, Ndamukong plays for Tampa Bay Buccaneers. Recently, he won his first Super Bowl after defeating Kansas City Chiefs.

Ndamukong Suh is a responsible married man. He is in a marital relationship with a real estate agent, Katya Suh, whom he met during his college days. Suh publicly announced his relationship with Katya for the first time only on 19 January 2019. And, now, the husband-wife duo is expecting their first kids as well. Here, learn everything about Ndamukong Suh’s wife, Katya Suh, and her role in the Suh family.

Ndamukong And His Partner Are Open About Their Relationship

As mentioned earlier, the American football defensive end Ndamukong Suh went public about his relationship with Katya only at the beginning of 2019. However, Ndamukong Suh’s wife, Katya, posted her first photo with Suh on her Instagram many months before that on 1 June 2018.

Ndamukong Suh met his future wife, Katya, while they were studying at the University of Nebraska in 2009 and remained close ever since. Eventually, they decided to move in together in 2018 and got engaged in the spring of 2019 while they were on vacation in France. They exchanged their wedding vows amidst the COVID-19 pandemic on 23 May 2020 in sweatpants and hoodies and took blessings from their families via a Zoom call.

Though Ndamukong Suh was quite secretive about his partner Katya, initially, he is more open about their romance in the present day. Both Katya and Ndamukong love to share their photos with each other on their respective social networking handles, flaunting their immense love for one another. Moreover, Katya even attends her better-half, Suh’s games, to encourage him. Ndamukong often calls her his biggest supporter.

Furthermore, going through the social media posts of Suh and Katya, it seems like they are planning to wed again in the physical presence of their loved ones. At one point, Katya posted a picture of herself on her Instagram wearing a wedding gown, and her close ones commented that they were eagerly waiting for the big day. It clearly hints that their wedding day with the presence of their close friends and family members is arriving shortly.

Katya And Ndamukong Are Expecting Twins

Finally, the thirty-four years old player, Ndamukong Suh, seems to be moving ahead to start a family. Soon after taking wedding vows with Katya Suh, he revealed that the pair are expecting his first kids – twins. The People magazine exclusively announced the happy news in December 2020.

Ndamukong Suh’s wife, Katya Suh, often shares pictures of herself with her baby bump on her social media pages. Her posts show that she is very eager to meet her kids and hold them in her arms. Her husband, Ndamukong, also posts photos with her expressing how impatient he is to meet his twin babies. Both soon-to-be parents, Katya and Ndamukong, are ready for their parenthood journey, and probably their babies are also ready to join this world soon.

According to Katya Suh’s LinkedIn, she is currently a real estate agent at Compass and Keller Williams Realty, Inc. Suh joined Compass in 2018 while she was part of Keller Williams Realty since 2016. Besides, Katya is also the Chief Executive Officer and founder of Kalon Media which provides multiple services such as production, Athletes & Business, and Life Style.

Furthermore, before starting a career in the real estate business and founding her own company, Katya Suh was a sales and events coordinator at a church in Atlanta. Also, she served as a morning news anchor of KSNT TV for two years, from 2014 to 2016. You can watch her old videos of anchoring on her YouTube Channel.

The wife of the sports personality Ndamukong Suh, Katya Suh, is also good at sports. She was Women’s Basketball player at Kansas State University, from where she graduated with Mass Communications and Electronic Journalism in 2013. Similarly, Katya was a student-athlete at the University of Nebraska, where she studied public relations.

Currently, Ndamukong Suh and his beloved wife, Katya Suh, reside in Florida. Though there are only two people and a dog at their home now, there is so little time remaining when it turns into a family of four. We hope we will soon get to update this article with Ndamukong Suh’s children.