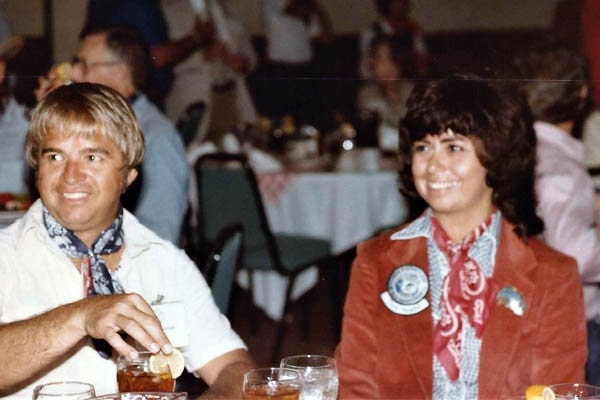 Jimmy Houston is a famous name in the field of fishing. He is recognized as one of the greatest bass fishermen of all time and a true representative of the fishing game. The fifteen times Bassmaster Classic qualifier and two-time Toyota Tundra Bassmaster Angler of the Year, Houston currently hosts Jimmy Houston Outdoors on the Outdoor Life Network. He is also the co-founder of TH3 Legends company which he formed with his fellow legendary fishermen, Bill Dance and Roland Martin.

The pro angler and TV host, Jimmy, is a family man. He is in a marital relationship with Northwestern Oklahoma-born Chris Houston. You might be surprised to know that Jimmy Houston’s wife, Chris Houston is not just popular as Mrs. Houston. More than that, she is a  legend in her own right. Here, please get familiar with Chris Houston and know why she is regarded as one of the fishing legends.

Jimmy Houston’s Wife Is The Bass Fishing Hall Of Famer

The beautiful wife of Jimmy Houston, Chris Houston, also known by the name Christine, is also an experienced person in fishing like her celebrity husband. She began fishing as a young kid on the banks of the Illinois River of Northwestern Oklahoma and participated in several fishing competitions held near her place.

Jimmy Houston’s spouse, Chris Houston, started fishing professionally in the early 1960s when bass fishing was in its developmental years. She took part in several bass fishing tournaments earning various titles and awards to her name. Chris finished third in the Oklahoma State Championship, which was held on Lake Tenkiller. Similarly, she finished first in the 1968’s World Series of Sport Fishing in the Women’s division on Lake Texoma.

Furthermore, Jimmy Houston’s wife, Chris Houston, assisted in forming the first-ever all women’s bass club, The Tulsa Bass Belles. While fishing with the club, when it was uncommon for ladies to go out fishing on a boat, she won the ‘Miss Bass Belle’ title several times. Mrs. Houston dominated the Bass’n Gal circuit for many years in the late 1970s. She won the Bass’n Gal angler of the year award seven times and the Bass’n Gal Classic thrice.

Moreover, Chris Houston participated in every ‘Legend of Fishing’ tournament held by Bass Pro Shops. In 1987, she was inducted into the Freshwater Fishing Hall of Fame, becoming the first female to do so. After the Bass’n Gal discontinued their circuit, she also retired from professional fishing. However, she is still actively fishing and frequently accompanies her husband in the Jimmy Houston Outdoors Television show and other related business.

Chris And Jimmy Met During Their High School

The lady angeling pioneer, Chris Houston, met her love, Jimmy, while both of them were in high school. When Chris met her future husband, Jimmy was her senior, and their meeting changed their lives. They participated in various fishing events together and got to be closer to one another, leading to their marriage.

A post shared by Jimmy Houston | The Bass Pro | (@jimmyhoustonoutdoors)

The marriage of Chris Houston and Jimmy Houston has crossed over half a century, and still, their love for each other is as strong as it was before. They have taken part in numerous fishing tournaments together and collectively won various awards and titles. Together, Chris and Jimmy are famous for being America’s First Family of Fishing. The happily married couple has worked together to qualify and fish almost 40 Bassmaster Classics, FLW championships, and Bass N Gal Classics. Besides, the husband-wife duo, Chris and Jimmy, have even bagged over a million dollars in prize money.

Jimmy and his beloved wife, Chris Houston, own a recreational ranch in Southern Oklahoma named Twin Eagles. They purchased the ranch in 2003, which has grown into nearly 2000 acres of outdoor paradise. Their little piece of heaven in Arbuckle Mountain Red River Valley provides some of the world’s best fishing and habitat for deer, elk, hogs, and plenty of ducks. You can obtain some of the best pecans you have ever tasted in their Twin Eagles ranch.

Jimmy Houston’s wife, Chris Houston, is a mother to two grown-up kids with her husband of over fifty years. They have a daughter named Sherri Houston and a son, Jamie Houston, who are also professional anglers like their parents.

Besides, Chris Houston and her partner, Jimmy Houston, are blessed with a couple of grandchildren and great-grandchildren. Chris Houston’s family loves working together on their large farm, cleaning, mowing, watering, and fertilizing their farm animals, and obviously fishing during their spare times.

Currently, Oklahoma’s one of the most inspiring couples, Chris and Jimmy Houston, reside in Southern Oklahoma.

Chris Houston is a legendary name itself, and the Houston couple is enjoying their retired life. However, Jimmy sadly announced that his wife is not doing well after a stroke she suffered on Monday evening after Easter.

Chris’s husband also added that she had not regained consciousness yet. Jimmy shared the news via his YouTube channel with great sadness. Sitting in a car with black glasses on, Jimmy seemed prepared for the worse.

Jimmy also revealed that his wife was airlifted to Oklahoma, and he arrived there at 4:30 in the morning. Sadly, he seemed and felt hopeless, but he also knows that God is gracious. He further asked his 93.5k subscribers to keep Chris in their prayers.

In the meantime, Jimmy’s children are continually updating the Facebook page. Let’s hope the hustler, Chris Houston rises healthy as soon as possible.