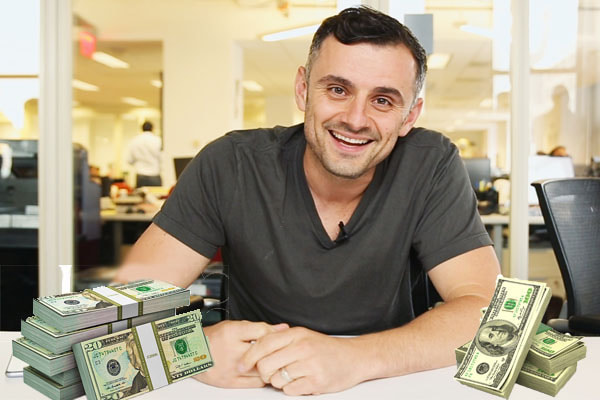 Gary Vaynerchuck’s Net worth is estimated to be at $160 million. Russian-born Gary is a man of multiple disciplinaries. Gary is an entrepreneur, CEO, motivational speaker, an author and also a consultant.

The family of the multi-millionaire Gary immigrated to the US in 1978. Gary started his career as the director of operations and co-owner of a wine retail store and also a public speaker and an author on the subjects of brand-building, social media, and e-commerce.

For his achievements, Gary has been featured in The New York Times, Time, and GQ. He is somewhat of a celebrity himself and has appeared as a guest in many shows like Ellen and Late Night with Conan O’Brien.

Gary Vaynerchuck Net Worth and Earnings

Alone in the last year, Gary pulled in $100 million. With his fast-growing agency VaynerX and VaynerMedia, they employ over 700 people and provide service to Fortune 100 clients.

The journey for Gary began way back in the late 90s when he first identified “the internet” as a land-grab opportunity. He transformed his father’s local liquor store into one of the first wine e-commerce platforms. The transition resulted in the growing of the family business from $3 million to $60 million.

Till date, the motivating Gary has published more than ten books. Here’s a list of some of Gary Vaynerchuk’s books with their respective prices:

With his prolific writing skills, Gary’s book has made it to the list of New York’s best selling list many times. The massive chunk of money Gary gets from the sales of his book also contributes to his $160 million net worth.

Besides having a successful career, Gary is also a great motivational speaker. He posts motivational vlogs on his YouTube channel GaryVee on a daily basis. It is not that he has to, but he wants to.

Being a motivational speaker. Gary is trying to act like an inspirational figure and guide people towards their desired goals. The multi-millionaire Gary Vaynerchuk has got over 1.4 million subscribers on his YouTube channel. Soon, Gary’s YouTube channel may be the biggest motivating vlogs.

According to Social Blade, Gary’s YouTube channel generates an annual income ranging between $9.3K-$148.2K. The money may seem less in comparison to Gary’s $160 million net worth, but it surely is a plus point.